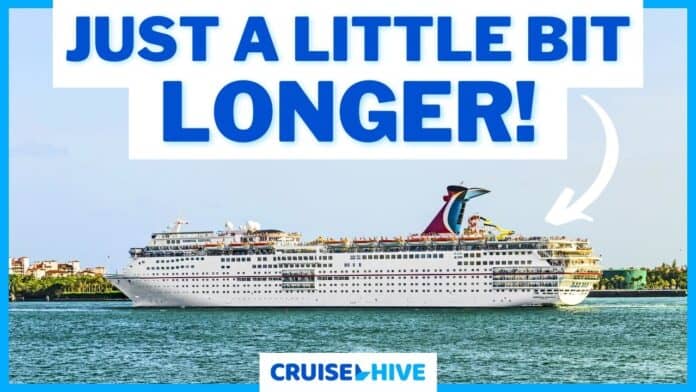 There’s plenty to catch up on in this week’s cruise news update but it’s not all good with some Carnival ships having to remain on hold even longer. However, across the industry, there are still cruise ships restarting operations including Virgin Voyages.

Here we go with another busy week of cruise news across all the major cruise lines and there is another Carnival cruise ship resuming operations today from the cruise capital of the world. We’ve also got news on Royal Caribbean, MSC Cruises, Virgin Voyages, and Princess Cruises. You can watch the full cruise update in the video below:

Carnival Freedom is restarting operations out of Miami, Florida on October 9 and the ship becomes the 12th ship in the fleet to do so. The vessel’s first return voyage will be an 8-day Eastern Caribbean itinerary that will include calls at St. Maarten, St. Thomas, San Juan, and finally Amber Cove. The long-awaited cruise on the Carnival Freedom will also have three days at sea with a return to Maimi, the cruise capital of the world on October 17.

We’ve all been talking about Virgin Voyages for years, but only now has the cruise line been able to actually begin guest operations from PortMiami. The first ship built for the cruise line, Scarlet Lady finally started cruises from the port on October 6.

Following the vessel’s summer UK staycations, Scarlet Lady is now sailing four- and five-night Caribbean itineraries. The ship will have a huge variety of cruises available in the coming months. Four-night Bahamas cruises will call in Nassau and Bimini and Other cruises include five-night Riviera Maya cruises to Cozumel, Mayan Sol voyages to Costa Maya, and Dominican voyages to Puerto Plata.

As most already know, Virgin Voyages is for adults-only and currently, guests must be fully vaccinated to cruise. The ship is 110,000 gross tons and has space for 2,770 passengers along with 1,160 crew members.

As expected, Carnival Cruise Line released an update on ships set to restart in 2022 as Carnival pushes forward on resuming operations. Additional time is needed to bring the entire fleet back to service, and as a result, five vessels in total are to remain on hold into 2022.

Carnival Sunshine will now resume cruises from Charleston on January 13, 2022, starting with a four-day Bahamas itinerary. Carnival Liberty, which just recently received its new livery, will resume from Port Canaveral on February 11, 2022.

Three additional ships will resume in 2022, including the Carnival Ecstasy from Jacksonville, Carnival Paradise from Tampa, and Carnival Sensation from Mobile. Sailings for all three Fantasy-class vessels are cancelled through February 2022.

If you’ve ever gone through the process of booking a cruise on Royal Caribbean, you’ll likely have seen the additional extras available for purchase before you sail. Think tour, drink packages, and an optional program called the Key.

The program, which guests can purchase access to during the booking process, has received some updates. One of the most significant changes is guests get complimentary room service for the duration of the cruise and 25% off onboard dining purchases. Guests with Key access get priority access in the terminal within booked arrival time on Day 1, previously this was a priority check-in pre-pandemic. On debarkation day, a special “grab and go” breakfast bag and choice departure is available, this was previously a la carte breakfast.

The Key was introduced some years ago, and you can think of it as a Fastpass with some extra benefits. For a daily fee, which you will need to pay on a per-person basis. The cost can range between $19.99 and $37.99 per person, per day.

The MSC flagship, MSC Seashore will have its naming ceremony at the cruise line’s private island Ocean Cay MSC Marine Reserve in the Bahamas. Sophia Loren is known most for her acting work, yet she also writes history in other areas. The actress will be naming her 16th MSC cruise ship, MSC Seashore, on November 18, 2021.

MSC Seashore will sail from Miami on November 17 on a special one-time christening voyage. Festivities will be held onboard the ship and ashore; the vessel will remain overnight in the Bahamas while guests enjoy a gala dinner celebrating the newest vessel in the MSC fleet. MSC Seashore will then begin regular cruises on November 20.

The new vessel will be sailing her inaugural 7-night cruise from Miami to Cozumel, Mexico, Montego Bay, Jamaica, and Ocean Cay Marine Reserve, before returning to Miami.

MSC’s flagship is the first Seaside EVO class ship, an evolution over the two other Seaside class ships, MSC Seaside and MSC Seaview. MSC Seashore has a guest capacity of 4,540 and is over 170,000 gross tons.

Have Fun. Be Safe, Carnival Cruise Line’s onboard and pre-boarding health protocols will remain in place into the new year. Guests who wish to sail onboard a Carnival cruise ship will need to be vaccinated for sailings through February 2022.

It means that all guests onboard above the age of 12 must be fully vaccinated at least 14 days before sailing. The cruise line has also confirmed that guests who require oxygen for medical reasons are not permitted to sail and will not be allowed to sail until March 2022.

Carnival Cruise Line will likely not be entertaining exemption requests for sailings in 2022. The reasoning is that the cruise line expects the FDA to approve vaccinations for kids aged 5-11 soon and that kids could be able to be vaccinated before the Holiday season.

For now, vaccine exemptions will only be available on a minimal basis for kids under twelve years old on Caribbean cruises through December 31, 2021.

Princess Cruises has made another significant step in bringing its fleet back into service, with Majestic Princess becoming the second in the fleet to begin sailings from Los Angeles, California.

After completing a partial season in Alaska, the vessel welcomed guests at the Port of Los Angeles on October 6 to begin 14 round-trip departures through the end of the year. The itineraries include calls in the Mexican Riviera, California Coast, and the West Coast ranging from three to 10 days.

Princess Cruises has been sailing from Los Angeles since 1965 and is the leading cruise operator on the West Coast. The cruise line contributed $594 million to the economy of Los Angeles in 2019 and is an essential part of the cruise industry, with over 700 ship vitis in LA over the past decade.

So those are just some of the major cruise news stories from the week, we’ve got even more, including MSC Cruises being approved to restart operations from another two countries, a major rebrand for Costa Cruises, iconic funnel removed from former Carnival cruise ship, Carnival Liberty receives new livery, construction begins on second MSC luxury cruise ship and many more.