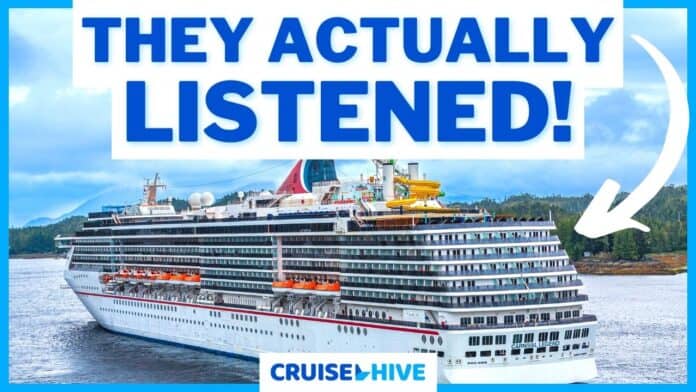 We’ve got you covered with another cruise news update covering the major cruise lines. It’s been a busy one as more ships resume operations in the U.S. and a huge demand for a Carnival cruise to Greenland.

Guests are once again enjoying the magic that happens onboard Disney Cruise Line’s Disney Wonder. The vessel is sailing on a 4-day round-trip Halloween On The High Seas cruise from San Diego, calling in Cabo San Lucas along with two days at sea.

The vessel departed on Friday, October 1 to restart operations. Disney Wonder became the final ship in the fleet to resume and the first in the fleet on the West Coast.

The ship will be sailing on this itinerary for the near future, alternating between three and four-day cruises to Baja Mexico. Three-night voyages will stop at the popular port of Ensenada and have a day at sea. The four-night cruises feature two days at sea and a call at Cabo San Lucas.

Carnival Miracle has become the second in the fleet to resume sailings out of Long Beach, California, and it comes after the ship has already been sailing from Seattle, Washington to Alaska since the end of July 2021.

On September 27, guests were welcomed on board with a party atmosphere and dancing from the crew in the atrium. The event was hosted by popular cruise director Jen Baxter and attended by the ship’s captain.

Carnival Miracle kicked off its offerings from Long Beach with a four-day Mexican Riviera itinerary. The ship made calls at Avalon at Catalina Island and Ensenada in Mexico. The vessel then returned to its homeport on Friday, October 1, 2021. The Spirit-class vessel will offer three- and four-day cruises for the remainder of the year.

Carnival Miracle joins Carnival Panorama, which became the first to resume from the Port of Long Beach on August 21, 2021. The Vista-class vessel is offering week-long cruises to the Mexican Riviera.

MSC Cruises aims to keep its health and safety measures through the winter season to make sure everyone remains safe onboard. The protocols were first introduced in August 2020 as MSC Cruises was among the earliest cruise lines to resume operations during the pandemic.

So for Caribbean cruises out of Miami and Port Canaveral, all guests 12 years and above need to be fully vaccinated. For U.S. residents, they will need to provide proof of a negative antigen or PCR test taken within 48 hours of before the cruise departure, whilst non-U.S. residents will need a negative PCR test taken within 72 hours of their cruise departure.

All guests aged from two years to 11 years will need to provide proof of a negative PCR test taken within 72 hours of their cruise departure.

We’ve got all the protocols for the different regions MSC Cruises operates in over on the website including the Southern Caribbean, Mediterranean, Nothern Europe, and the Middle East. The Winter season protocols for South America and South Africa are to be released soon.

With such a huge demand for Carnival’s Greenland voyage departing in September 2023, the cruise line has been able to add an additional sailing. The voyage that departs on September 2 from the Port of Baltimore sold out in just 24 hours.

Carnival Cruise Line has now decided to add a second Greenland voyage which departs even earlier on August 13, 2023. Carnival Legend will depart on Sunday, August 13, starting with five consecutive days at sea and arriving at Nanortalik in Greenland on August 19. The next day on August 20, the Carnival ship will visit Qaqortoq, followed by another day at sea.

Carnival Legend is becoming the go-to ship in the fleet for cruises to Greenland. The Spirit-class vessel first made visits to the country in 2013 out of Dover in the UK. The ship is currently preparing to begin sailings and replace sister ship Carnival Pride out of Baltimore on November 14, 2021.

Guests scrambling to make sure they can get tested within the correct timeframe before a cruise will be happy to know that Royal Caribbean has come up with a backup with the “Boarding Day Test” option. The cruise line now offers pre-cruise testing at the terminal, but it’s limited and should only really be used if all else fails.

In the email that’s been sent, the cruise line starts by saying, “Pros: A last option if you simply can’t find a pre-cruise test or could not secure results in time.” it means that guests should only use the terminal testing option if all other testing arrangements don’t work out such as home test kits and at a specific test site.

Royal Caribbean goes on to say in the email, “Cons: For vaccinated guests only. Limited availability by appointment only. Wait up to an hour for results outside of terminal. Positive result unknown until boarding day.”

It’s good to know that the cruise line does have an option there if needed, and it’s advised by the cruise line to “search out other options first.” Guests can then book an appointment 24 hours in advance for 30-minutes before check-in time. The testing at the terminal will cost at least $99 per person, along with waiting outside the terminal for up to an hour for the result.

13 Carnival cruise ships will offer the experience, including the additional ships that will restart operations in October, including Carnival Freedom from Miami and Carnival Elation out of Port Canaveral. Mardi Gras, Carnival’s new flagship, will also feature Halloween specials for the first time starting from October 2.

Norwegian Breakaway became the first in the fleet to resume sailings from New York City. Oasis of the Seas has been operating Bahamas cruises from Bayonne, New Jersey, since early September, so cruise passengers in the region now have an even wider choice of epic cruise ships to choose from.

The 3,963-passenger Breakaway-class ship restarted operations on September 26 and welcomed guests back on board for the first time in over a year. Norwegian Breakaway will sail on six week-long cruises to Bermuda with overnights to the Royal Navy DockYard. The ship will then embark on its repositioning 14-day voyage followed by the start of sailings from New Orleans on November 7.

Norwegian Breakaway is the sixth of the Company’s 17-ship fleet to redeploy since July 25, 2021, when Norwegian Jade was the first to set sail with seven-day itineraries to the Greek Isles after a 500-day suspension. Norwegian Encore became the first ship in the NCL fleet to return to cruising from the U.S. on August 7, 2021.

So those were just a handful of the news headlines from the week, we’ve got even more including: