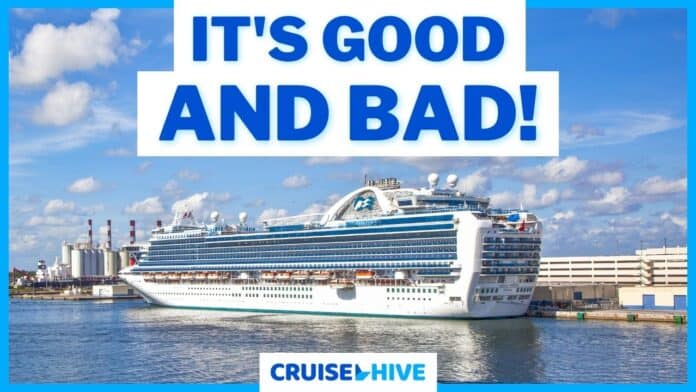 It’s just been another busy week in the cruise industry so here are the major cruise news headlines with some good and bad as cruise ships resume operations, but also some more cancellations and changes.

Here we go with another cruise news update full of good and bad! Princess Cruises had a busy week with another vessel restarting and news on even more ships resuming in the U.S. Also, we’ve also got coverage on Royal Caribbean cancelling cruises, a Carnival Cruise Line glitch, some great news about Grand Turk, one of the most famous captains around will take the helm of the new Celebrity cruise ship and MSC Cruises makes it up to cruise guests.

It’s almost daily now that cruise ships are coming back into service, and that includes the Emerald Princess that restarted from the Port of Los Angeles in California on October 15. Following a ribbon-cutting ceremony, guests were welcomed on board for the first time since the pause on operations started in March 2020.

Emerald Princess set off on a 15-day Panama Canal itinerary that ends in Fort Lauderdale, Florida. The voyage will include calls at Puerto Vallarta, Panama Canal, Aruba, Curacao, and Bonaire.

Starting on October 30, the Princess vessel will sail a series of 10-day Panama Cancal roundtrip cruises from Port Everglades in Florida through December 2021.

So far, when it comes to operations in the U.S., Grand Princess and Majestic Princess are also already sailing from Los Angeles. Enchanted Princess will also restart operations from Florida in early November.

It was a glitchy start to the week for Carnival Cruise Line, with guests receiving email communications earlier than needed and not being able to log in on the Carnival website. It’s resulted in a lot of confusion for guests, and some worry if the email is ignored.

The email that’s being sent out too early to many guests is for the online health assessment that includes vaccine status. It’s an important communication from the cruise line which reminds guests that they must fill out their details within 48 hours before cruise departure.

Carnival repeatedly responded to guests, confused about the communication, and said that it was an error to send out the email too early and that there was an issue with the website.

The reason for the worry in completing the health survey is because if it’s not completed, it’s grounds for the cruise line to cancel the booking.

The good news is that the glitch does seem to have been resolved, and no more confusing emails too early. If you have received one of these emails and are not sure what to do, do make sure you get in touch with the cruise line to find out.

With the world cruise cancelled for MSC Poesia in 2022, MSC Cruises is making it up to guests by offering an additional ship for 2023. MSC Poesia is already set to offer a 2023 world cruise, and MSC Magnifica will join her in the same year.

MSC Magnifica will sail the identical voyage that the cancelled MSC Poesia was set to do in 2022. The ship will visit 43 destinations in 24 countries, and the journey will last for 117 days.

The reason for the cancellation in 2022 is limited port availability due to restrictions in place from the pandemic. Both vessels will depart the Port of Civitavecchia on January 4 and from the Port of Genoa on January 5, 2023. Guests can also embark at Marseille in France and Barcelona in Spain.

Those guests impacted by the cancelled voyage in 2022 are being contacted by the cruise line and given priority in protecting their booking for MSC Magnifica. Guests who are moving their booking to the 2023 voyage will also be able to book a complimentary cruise between January 1 and May 3, 2022, so that they can still enjoy a vacation for that year.

Grand Turk to Reopen in December 2021

After 21 months of no cruise ships calling at Grand Turk, the cruise port will finally begin welcoming back vessels from early December 2021. The return to the popular cruise destination was confirmed by the Government of Turks and Caicos and Carnival Corporation CEO Arnold Donald.

Grand Turk is a popular port of call for Carnival Corp, especially for Carnival Cruise Line, with multiple ships visiting before the pandemic hit, along with ships from Princess Cruises and Holland America Line. The government and Carnival Corp have signed an agreement for $24 million of investment.

The agreement includes an extension to the dock so larger cruise ships can be accommodated. There will also be some improvements to the reception facility at the Grand Turk Cruise Center, likely to cater to increased passenger numbers in the future.

The same problems that affected Carnival Cruise Line and caused that company to cancel its Australia season are affecting Royal Caribbean. There is a general lack of clear guidelines and a pathway to restart cruising in Australia once again.

Ovation of the Seas sailings between December 2021 and the end of March 2022 have been cancelled as a result. The ban on cruise ships down under is currently in place until December 17, 2021 but it could be extended for even longer.

Royal Caribbean says it is actively engaging the Australian government to resume operations in the country as soon as possible; for now, the Federal and State Governments in the country have not given any signs of when cruises can restart.

Captain of Celebrity Beyond

Captain Kate McCue, who has more than 3.5 million follows across TikTok, Instagram and YouTube, has already been breaking records as the first American female to captain a major cruise ship. She’s now going to be the captain for Celebrity Cruises’ newest cruise ship, Celebrity Beyond.

The famous captain will take the helm when the new vessel debuts in Spring 2022. Celebrity Beyond’s maiden voyage will depart on April 27, 2022, from Southampton, England, for a 10-night Western European cruise including calls at Bordeaux, France; Lisbon, Portugal; and Seville, Malaga, Palma de Mallorca, and Barcelona, Spain.

Celebrity Beyond is currently in the final stages of construction at the Chantiers de l’Atlantique shipyard in Saint-Nazaire, France. Once completed, the third Edge-class cruise ship will be 140,600 gross tons with a guest capacity of 3,260 along with 1,400 crew members from 60 countries.

More Princess Cruise Ships to Restart in the U.S.

Princess Cruises continues to bring more of the fleet back into service, including three additional Medallion vessels starting from February 2022 in the U.S.

Eight Princess ships will have resumed in 2021, with Crown Princess, Island Princess and Royal Princess joining them in February, March, and April 2022, making it a total of eleven ships.

Crown Princess will begin cruises from Los Angeles on February 13 with sailings to Hawaii and the California Coast. The ship will join Majestic Princess and Grand Princess, which have already resumed operations from the port.

For Island Princess, the ship will resume service out of Fort Lauderdale, Florida, on March 6. The ship will offer a 14-day, 10-day cruise and a series of 7-day cruises to the Southern, Eastern and Western Caribbean. Royal Princess will restart on April 8, 2022, from Vancouver to offer California Coast sailings.

So those were just a few of the cruise news stories from the week, we’ve got even more on including former Carnival cruise ship heading for the scrapyard, Cruises restart from the Port of Tampa with Serenade of the Seas, Carnival Cruise Line returns to Princess Cays in the Bahamas, AIDA Cruises is returning to the Caribbean and Marella Cruises announced new U.S. itineraries along with an additional ship to join the fleet.