The latest cruise news updates with developments from major cruise lines as the industry makes a comeback. 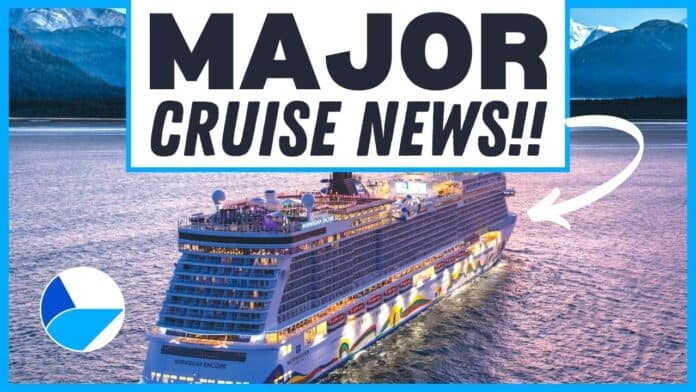 A full week of cruise news updates from all the major cruise lines as the cruise industry continues to bring more ships back into service.

Here we go then with just another busy week of cruise news! We’ve got updates from all three major cruise lines including Carnival Cruise Line updating its requirements, Norwegian Cruise Line restarting U.S. operations, and a big update from Royal Caribbean on the next batch of ships that are restarting. MSC Cruises has kicked off cruises from Florida and we will end with some sad news coming from Alaska which we all need to spare a thought on. So let’s get started.

Today is a huge day for Norwegian Cruise Line with the restart of its operations in the U.S. for the first time in over 500 days! Norwegian Encore is departing out of the Port of Seattle, Washington which also restarts NCL’s Alaska season.

So the newest ship in the fleet will begin sailing seven-day voyages including stops at Icy Strait Point, Skagway, Juneau, and Ketchikan. Sailings will continue through October 16 and when Norwegian Encore does call at Icy Strait Point it will be at the new second pier which has been developed by parent company Norwegian Cruise Line Holdings.

Norwegian Jade became the first NCL ship to restart operations when she departed out of Piraeus, Greece on July 25. The vessel is also the first in the fleet to homeport in Piraeus, the port for Athens and currently sailing the Greek Isles. Norwegian Gem will be the next to restart cruises on August 15 out of Miami, Florida.

Norwegian Cruise Line is keeping things straightforward and simple by having all crew members and all guests fully vaccinated. There are no exemptions or people on board that will not be vaccinated like on other cruise lines.

Cruise lines are adapting to the developing health concern to make sure guests can remain safe during a cruise vacation. This also includes Carnival Cruise Line, which has already restarted operations with five vessels, including the new Mardi Gras.

The cruise line has made changes to its protocols across all cruise ships. From August 7, all guests will be required to wear a face mask in specific indoor areas, especially in busy areas. When outdoors, guests can continue to not wear a mask just as before. The new mask-wearing policy will continue through October 31, 2021.

Carnival Cruise Line is also implementing a new pre-testing requirement effective from August 14, 2021, through October 31. With this new requirement, guests who are fully vaccinated will also have to show proof of a negative PCR or antigen test result taken within three days before embarkation. The cruise line will not be offering a test in the terminal, something which some other cruise lines are doing.

The new changes are all detailed on the cruise line’s Have Fun Be Safe health measures, and details could change in the future as the situation remains fluid. Carnival has already made several itinerary changes due to ports of call having different restrictions, such as the Cayman Islands, which is not allowing cruise ships to visit until early 2022.

Royal Caribbean has released when each remaining ship will resume cruise operations. The entire fleet will be back in service by Spring 2022, including from the U.S., Australia, Europe, and Asia. So far, seven vessels have already resumed operations and the cruise line has already announced restart dates for August.

So let’s take a look at which Royal Caribbean ships will restart from September into Spring:

Even though MSC Cruises has already been back in service in Europe for many months, it’s now able to also focus on its return from the U.S. MSC Merviglia became the first in the fleet to resume sailings from the U.S. on August 2.

The vessel is sailing three- and four-night cruises to the Bahamas, including a call to MSC’s own private island of Ocean Cay. The ship will also sail seven-night eastern and western Caribbean cruises from September 18, 2021. The week-long sailings include two separate calls at the cruise line’s private island and Nassau in the Bahamas and Ocho Rios in Jamaica.

Cruises from the U.S. will be for vaccinated and unvaccinated guests who will have more restrictions during voyages to ensure everyone on board remains protected. There is also testing at embarkation and periodic testing of the crew. There is a range of protocols in place as part of MSC’s health and safety program.

The good news is that the situation is on the up, especially now that Norwegian Jade became the first in the fleet to resume operations in late July! The ship departed Piraeus in Greece on July 25 with guests onboard. It marks NCL’s great comeback, something the company has been covering with its EMBARK video series.

All 28 cruise ships across the three brands are expected to be back sailing by April 1, 2022. 75% of the fleet is to be operating by the end of this year. The restart will really begin to increase through August, with Norwegian Encore becoming the first in the fleet to restart in the U.S. as we mentioned earlier.

On the booking front, the situation is looking more positive. Despite reduced marketing, 2022 bookings are looking stronger than in 2019. This even includes bookings using Future Cruise Credits due to previous cancellations. Ticket sales were $1.4 billion as of June 30, 2021.

The strong bookings come in good time, with Norwegian Cruise Line Holdings having a monthly average cash burn of $200 million in the second quarter. This is higher than the $190 million in the first quarter. It comes as cruise lines are having to prepare for the restart of operations globally. This includes several things such as bringing ships back up to full crew capacity, provisions, maintenance, and repositioning to homeports.

You can read the full business update from the cruise company over on the website along with the latest situation with the State of Florida on its vaccine passport ban.

We end with some very sad news indeed as a floatplane crashed on Thursday and the U.S. Coast Guard confirmed that all six people on board died. Five of those were cruise passengers from the Nieuw Amsterdam cruise ship which was docked in Ketchikan for the day. One person was the pilot of the sightseeing plane.

The passengers were on a tour not booked through the cruise line and the wreckage of the plane was found at approximately 2:37 PM on a ridgeline near the Misty Fjords area in Alaska. We have the full coverage over on cruisehive.com and our thoughts are with the families and friends during this difficult time and while cruise lines are celebrating their return to Alaska in recent days just spare a thought to those who lost their lives.

So those are just some of the cruise headlines from the week, we’ve got even more including Princess Cruises and Holland America Line increasing protocols, Virgin Voyages begins cruises in the UK, Mardi Gras completes first-ever call at Nassau in the Bahamas, the new Odyssey of the Seas completed maiden calls and loads more news. You can also check out when each cruise line plans on resuming operations and the latest developments on the industry comeback.