Your cruise news update with all the latest major headlines from the week. A lot has happened with protocol changes, mistakes and more. 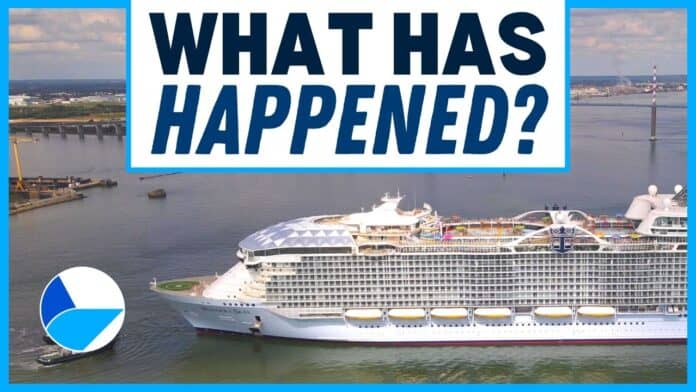 What has happened? Well, there’s been a lot of important cruise news updates with protocol changes, not a good restart for one Carnival cruise ship, and a mistake from one major cruise line.

Here we go with another busy cruise news update as cruise lines continue to move forward on resuming cruise operations and adapting to the fluid situation to make sure guests and crew remain safe. So we’ve got some updates on protocols, Wonder of the Seas completing sea trials, a technical issue for one of Carnival’s ships, and of course, plenty of itinerary changes. And there’s even a mistake from Royal Caribbean!

We’re starting with the soon-to-be world’s largest cruise ship which has not long completed her first sea trials, and what happened during this major milestone? Many important aspects to make sure she’s seaworthy!

So on August 20, the next world’s largest cruise ship, Wonder of the Seas, departed the Chantiers de l’Atlantique shipyard in Saint-Nazaire, France, to begin the important sea trials. It was a major milestone as the huge new cruise ship for Royal Caribbean is in the final stages of construction.

Wonder of the Seas, the 5th Oasis-class cruise ship, spent a few days out at sea to make sure she is seaworthy and to test things like propulsion, including technical aspects that can only be tested while at sea.

The sea trials lasted for four days and covered 1,550 nautical miles. The ship was pushed to its limits during a series of tests, including propulsion, navigation, engine performance systems, and much more. There were a total of 40 sea acceptance tests completed. Many inspections were completed, including checking piping, electricity, and the HVAC systems.

Wonder of the Seas went as fast as 24 knots while out at sea, 2,450 feet per minute. There were 500 Royal Caribbean team members and shipyard workers inclined in the sea trials.

With the vessel arriving back at the shipyard, work continues outfitting all the interior spaces to make sure the ship is completed in time for delivery to the cruise line in early 2022. The new Oasis-class cruise ship will first be experienced by guests in Asia when she debuts out of Shanghai, China, in March 2022. The ship will offer four- to nine-night itineraries to Japan from Shanghai and then Hong Kong.

Once completed, the Royal Caribbean cruise ship will be an impressive 236,857 gross tons making her the new world’s largest cruise ship and taking over the title from sister ship Symphony of the Seas.

Carnival Panorama has not had the best of starts as the Carnival cruise ship has been forced to make itinerary changes during the first voyage back after more than 17 months.

The third Vista-class cruise ship is suffering from an issue related to its maximum cruising speed. Carnival Cruise Line sent out a letter to guests on August 25 letting them know about the problem and that their time at Cabo San Lucas on August 26 would be altered and with a delayed arrival back at the Port of Long Beach in California on August 28. The ships would be arriving back home at approximately 10:30 AM rather than the originally scheduled 9:00 AM.

The call at Cabo San Lucas on August 26 was altered to make sure the ship arrived back home at the new arrival time. Originally for Cabo San Lucas, the Carnival Panorama had an arrival time of 7:00 AM and a departure time of 3:00 PM. Instead, the ship already arrived at 6:00 AM and departed an hour earlier at 2:00 PM.

The ship first started sailing in December 2019 and is the second newest ship in the fleet at 133,500 gross tons and a guest capacity of 4,008 at doubler occupancy.

Cruise Hive last reported a similar issue with the Carnival Dream, which was also in August but back in 2019. In June 2019, sister ship Carnival Vista also had an issue with its maximum cruising speed resulting in changes to its itinerary.

An issue like this can’t be resolved quickly and there is no word from Carnival Cruise Line are when this will be resolved.

Disney Cruise Line is making changes to its protocols so that cruises can continue in the Bahamas, and it complies with the new requirements issued by the Government of the Bahamas.

Starting from September 3, 2021, the cruise line will require all guests 12 years old and over to be fully vaccinated. The updated requirements will remain in place until November 1, 2021, and applies to sailings to the Bahamas, including its private island of Castaway Cay.

Disney is still following the guidelines by the U.S. Centers for Disease Control and Prevention (CDC), and guests are classed fully vaccinated 14 days after their final dose. Proof of vaccination must be provided to the cruise line no later than 24 hours before the ship departs. No proof means being denied to embark on the cruise ship.

Disney Cruise Line is still allowing those under the age of 12 to sail, but they will have to have a negative PCR test taken between five days and 24 hours before departure. A further test will take place at the terminal before being allowed on board.

The updated requirements for sailings to the Bahamas from September 3 until November 1 will impact two cruise ships. Disney Dream is already operating cruises to the Bahamas. The ship restarted operations out of Port Canaveral, Florida, on August 9 and is now making calls to Nassau and Castaway Cay on three- and four-night sailings.

Disney Fantasy will resume cruises on September 11 with four-night sailings also out of Port Canaveral.

Royal Caribbean had sent out a new policy change that required all guests on back-to-back cruises to pack up all of their items and leave the vessel in-between their cruises.

But wait! This was a mistake by the cruise line and not long after, another communication was sent out to guests with an apology due to the wrong information. Royal Caribbean said, “With our last back-to-back update, we provided the wrong information and apologize for the confusion. We had advised all back-to-back guests that they were required to pack their bags and bring them to the terminal between sailings. This is incorrect. You do not need to pack your bags and bring them to the terminal.“

The new policy the company sent out will likely be received in a much more positive light as guests are not required to pack their luggage and leave the ship with it in between cruises. Also, testing will be done on board the ship and not in the terminal.

This means guests only need to leave the ship for customs and immigration and checking in for their new cruise.

Royal Caribbean says, “Guests who sail on back-to-back cruises must show proof of full vaccination against COVID 19 and are required to take a COVID 19 test producing negative results between each sailing. This test will be administered onboard at no expense to the guest.“

Whatever the reason, it is apparent that Royal Caribbean is taking no chances to make sure COVID stays off its ships. The line has now implemented a 100% vaccination mandate on all of its ships worldwide.

The Carnival-owned cruise line continues to move forward with its plan to resume cruise operations. Princess Cruises has already resumed sailings to Alaska, and more ships are set to restart in September 2021.

An update has been released for Island Princess and Diamond Princess on when they will make a comeback. Island Princess will begin with a series of Caribbean cruises before its 14-day Panama Canal voyage on April 27, 2022.

Diamond Princess, a ship that received a huge amount of media coverage when the pandemic started to impact the cruise industry, will finally begin cruises in Spring 2022. The ship will return with a season of Japan sailings, and the cruise line will announce more details on this soon.

Now that Princess has released when the two vessels will restart, it does mean that previously scheduled cruises have to be canceled. The 2021-2022 South America & Antarctica offerings for Diamond Princess will no longer take place. Island Princess’ 2022 World Cruise and two other cruises are canceled too.

Island Princess and Diamond Princess have remained on hold since the start of the pandemic. Both ships will follow the rest of the fleet as the cruise line gradually resumes operations worldwide. By November 28, 2021, there will be a total of eight MedallionClass vessels back in service, including Majestic Princess, Grand Princess, Ruby Princess, Enchanted Princess, Sky Princess, Regal Princess, Caribbean Princess, and Emerald Princess.

Holland America Line provides an update for two cruise ships that will restart operations in 2022. It comes as the cruise line pushes forward with its restart plan, with six vessels set to be back in service by November 2021.

The cruise line has provided an update on the Volendam and Zaandam cruise ships that will now restart operations in May 2022. New cruise offerings will result in the cancellation of the Grand World Voyage and Grand South America and Antarctica Voyage in 2022.

Volendam will make a return on May 1, 2022, offering 14- to 35-day voyages, including the Baltic, Norway, British Isles, and Iceland. The cruises will take place out of Rotterdam, Netherlands. There will also be options to cruise along the Iberian Peninsula to the Mediterranean and down to Egypt and Israel.

Zaandam will restart operations on May 12 from Fort Lauderdale, Florida, to Boston, Massachusetts. There will then be itinerary offerings between Boston and Montreal, Quebec, Canada. In July 2022, the Holland America cruise ship will sail a 35-day cruise from Boston, including Canada, Greenland, Iceland, Norway, the Netherlands, the United Kingdom, and Ireland.

So those are just a handful of the cruise headlines from the past week, we’ve got even more including Symphony of the Seas returning to San Juan, Puerto Rico for the first time in more than 17 months, Carnival Cruise Line provides an update on back-to-back cruises, the first cruise ship restarts out of Boston, The CDC updates advisories for two popular cruise destinations and many more updates.