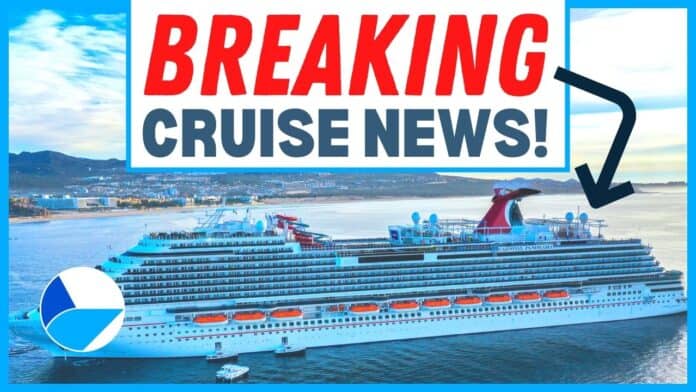 Let’s get caught up on all the latest cruise news updates in the cruise industry and some breaking cruise news with the first cruise ship finally restarting operations from California and important updates just in from the CDC.

Here we go with all the major updates from the week and we’ve got some breaking cruise news for you with an important update from the CDC, changes in the Bahamas for cruise passengers, the 5th Oasis-class cruise ship heading out on sea trials, the first Royal Caribbean cruise ship resumes from Galveston, Norwegian Cruise Line restarts from Miami and oh yes, Carnival Cruise Line becomes the first cruise line to resume operations out of California.

Norwegian Cruise Line has officially restarted operations out of the cruise capital of the world, Miami in Florida. Norwegian Gem begins the long-awaited cruises to the Caribbean out of PortMiami and became the third cruise ship in the fleet to resume sailings.

The vessel departed on August 15 with guests onboard on a seven-night Caribbean cruise which includes calls at Roatan in Honduras, the cruise line’s private island of Harvest Caye in Belize, and a call in Costa Maya and in Cozumel, both in Mexico. Norwegian Gem will be arriving back home in Miami on Sunday, August 22.

The day was even more special as the Norwegian cruise ship was the first in the fleet to begin passenger operations from the cruise line’s new PortMiami Terminal. The new facility caters for vessels that can carry up to 5,000 guests, and the facility that’s brought a new modern look to the port is 188,000-square-feet.

And some breaking cruise news for today as Carnival Panorama becomes the first cruise ship to restart operations out of California since suspensions started in March 2020. She will also be the eighth ship in the fleet to resume as Carnival Cruise Line continues to move forward with its phased-in return to service.

So Carnival Panorama which is the third Vista-class cruise ship is departing today on a seven-day Mexican Riviera cruise out of Long Beach, California. There will be three days at sea during the voyage along with calls at Puerto Vallarta, Mazatlan, and Cabo San Lucas, all in Mexico. The cruise line recently sent out an important update for the first two sailings with the order of the ports swapped around and some requirements which guests must follow when ashore.

It’s a big day for Carnival Cruise Line as so far ships have only resumed out of Florida and Texas. There is a “Back to Fun” ribbon-cutting ceremony taking place just before guests are welcomed on board by the crew of the Carnival Panorama. Very exciting times for sure and we’ll keep you all updated here at Cruise Hive.

On to some more breaking news as Royal Caribbean’s 5th Oasis-class cruise ship, Wonder of the Seas, begins sea trials as the vessel nears completion in France. The cruise ship departed the Chantiers de l’Atlantique shipyard in Saint-Nazaire, not long before 5:00 PM on Friday, August 20.

The ship will spend four days at the open sea to test many technical aspects that can only be tested while at sea. Propulsion will be tested, making sure Wonder of the Seas is seaworthy before being delivered to the cruise line.

Often during sea trials, work will not come to a halt on the interior spaces. Many workers are still on board, working on outfitting the interior venues to ensure the ship is completed as scheduled. The majority of the main exterior has already been completed.

Last week, Royal Caribbean provided an update on its soon to be, new flagship. Wonder of the Seas is more than 95% complete, and at the time, the shipyard started installing the three waterslides and the 10-story Ultimate Abyss slide at the aft. The cruise line also says that some of the most complex work is in the final 5% of construction.

Once complete, Wonder of the Seas will overtake sister ship Symphony of the Seas as the world’s largest cruise ship at an impressive 236,857 gross tons.

Just in time for her first cruise, Royal Caribbean’s Independence of the Seas received her conditional sailing certificate from the Centers for Disease Control and Prevention (CDC) last week. The cruise ship has now started cruising from her homeport of Galveston, Texas.

The Freedom-class cruise ship is sailing on a seven-night Western Caribbean itinerary from Galveston and calling in Roatan, Costa Maya, and Cozumel, with a sea day at the start and end of the cruise. Despite some worry from Hurricane Grace hitting Cozumel, the ship was still able to make its call there and is arriving back home on Sunday, August 22.

For cruises onboard Independence of the Seas departing from Galveston, Texas, guests aged 12 and up must present proof of Covid-19 vaccination with the final dose administered at least 14 days before sailing.

So far 12 Royal Caribbean cruise ships have resumed operations, Harmony of the Seas was the latest when she started sailing in the Mediterranean on August 15.

The Government of the Bahamas has issued an emergency order that impacts cruise ship passengers. The order was released on August 19 and will go into effect from September 3, 2021. So from that date, all guests that are 12 years old and over must be fully vaccinated to be allowed to enter a port in the Bahamas including cruise line private islands. There are also some other details such as the ship needing to submit the manifest before arriving but the main aspect is the new vaccine requirement for guests.

With St. Thomas in the U.S. Virgin Islands also implementing its own vaccine requirement, cruise lines are evaluating their own protocols to make sure cruise operations are not impacted. Following the requirements in the Bahamas and St. Thomas, Royal Caribbean has already aligned its protocols. For September, Florida departures will also be requiring guests who are 12 years old and over to be fully vaccinated which is already in place for other departures in other states and countries.

Everything remains fluid at the moment and constant changes are being made to keep everyone safe so it’s more important than ever to make sure you go through all the protocols before going on a cruise and check for any last-minute updates.

And while we’re on the topic of keeping everyone safe, some breaking news just coming in from the U.S. Centers for Disease Control and Prevention (CDC).

The cruise travel notice has been updated and the CDC now says that travelers who are more at risk of severe illness or COVID should avoid cruise ship travel. This was updated on Friday evening, August 20 and there are details on who this impacts released by the CDC.

So those are just some of the cruise news stories from the week, we’ve got even more including a new interactive experience revealed for Disney Wish, Norwegian Cruise Line extends its vaccine requirement, MSC Cruises updates its protocols, a further suspension in Australia for Carnival Cruise Line, Disney Cruise Line delays the restart for Disney Fantasy and loads more.

It’s just been another hectic week in the cruise industry and I didn’t even mention all the itinerary changes due to Hurricane Grace, thankfully that has now all passed.