The latest cruise news update with all the top headlines from the week covering major cruise lines. 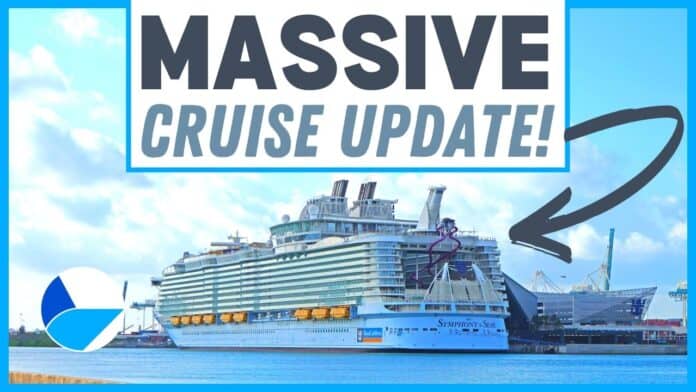 It’s time to get updated on the latest cruise news as more cruise ships restart operations. However, it’s not all been smooth sailing.

Here we go with another busy week of cruise news and we’ve got updates across all the big three cruise lines. The world’s largest cruise ship restarting out of Miami, Norwegian Cruise Line has been busy in Alaska, there’s news on new cruise ships including MSC Seashore, Wonder of the Seas, Norwegian Prima, and P&O Iona. And we’ll also go into the latest situation on Carnival Vista after 27 people tested positive.

We start with Symphony of the Seas which is currently the world’s largest cruise ship as she is finally restarting operations today! The Royal Caribbean vessel is restarting out of Miami, Florida today with a seven-night Western Caribbean cruise including calls at Costa Maya in Mexico, Roatan in Honduras, Cozumel in Mexico, and of course a cruise would not be complete without a visit to the cruise line’s private island, Perfect Day at CocoCay in the Bahamas.

Symphony of the Seas will be sailing Eastern and Western Caribbean itineraries into 2022 and she follows several Royal Caribbean ships that have already restarted out of Florida including the new Odyssey of the Seas out of Fort Lauderdale and Freedom of the Seas also out of Miami. Independence of the Seas will become the first ship in the fleet to restart operations out of Galveston, Texas on Sunday, August 15.

The first cruise ship from Norwegian Cruise Line to start operations in the United States, Norwegian Encore, has made its debut in Alaska. The vessel left the Port of Seattle on August 7, and locals welcomed guests to Icy Strait Point on August 10.

The Wilderness Landing provides guests with more opportunities to explore the region, while guests have easy access to Adventure Landing, the first pier in Icy Strait Point, through the new gondola system. A second gondola system will be in operation towards the end of the year.

Norwegian Encore also made a visit to Juneau and Ketchikan for the first time and the ship is returning back to Seattle on August 14. She’s the first ship in the fleet to resume cruise operations in the U.S. and will continue to sail in Alaska through October 16.

We now shift to something more serious with 27 people on board the Carnival Vista who tested positive for Covid during the vessel’s week-long cruise that started out of Galveston, Texas on August 7. Even though the cruise line confirmed there were a small number of cases on board early during the cruise, the Belize Tourism Board confirmed the exact number of people infected and what the ship has done to deal with the situation.

26 crew members and 1 guest tested positive for the virus and were immediately isolated on board. All those infected were fully vaccinated. With the Carnival Vista making a scheduled call in Belize on Wednesday, the authorities in Belize had a meeting with the leadership team on board and the vessel was allowed to make its scheduled call.

Guests were still allowed to enjoy their time ashore but did have to show proof of a negative test. Those guests who couldn’t prove a negative test had to go through random testing.

Carnival Cruise Line had the situation under control during the voyage and followed protocols to make sure everyone on board remained protected. The ship also made its scheduled call in Cozumel, Mexico the following day.

This is the new reality the cruise industry faces as cruise lines bring more ships back into service. The guest and crew members were all vaccinated and no doubt this will be an ongoing issue as more ships make a return. The U.S. Centers for Disease Control and Prevention (CDC) already investigated the cases on Carnival Vista and the ship is under observation.

The 19th cruise ship to join the MSC Cruises fleet has started operations in Europe for the first time. MSC Seashore made a call in Naples, Italy on August 9, as part of its inaugural seven-night itinerary. The voyage also included additional embarkation ports of Barcelona in Spain, Marseille in France, and Genoa in Italy. The vessel then made a port of call at Messina in Siciliy and then Valetta in Malta.

Now that the new flagship has started sailing, the anticipation grows for when she debuts in the U.S. in November. Following the summer season of Mediterranean cruises, MSC Seashore will complete an 18-night transatlantic voyage in Miami, Florida.

From PortMiami, the ship will begin to offer seven-night cruises to the Bahamas and the Caribbean. There will be two alternating itineraries in the Eastern and Western Caribbean.

As part of both itineraries, the MSC Seashore will also make a call at the cruise line’s private island of Ocean Cay MSC Marine Reserve, located in the Bahamas. The ship will become the third in the fleet to begin sailing in the U.S. MSC Meraviliga has already resumed cruises out of Miami, and MSC Divina will restart in September.

MSC Seashore is the first Seaside EVO class in the fleet which is an evolution of the popular Seaside-class ships.

Wonder of the Seas 95% Complete

Royal Caribbean provides a construction update on its fifth Oasis-class cruise ship, Wonder of the Seas with approximately 95% of the ship complete. She will also become the world’s largest cruise ship, a title every ship in the class held when they entered service.

The huge Oasis-class vessel is currently under construction at the Chantiers de l’Atlantique shipyard in Saint-Nazaire, France. Since April 2019, when the first piece of steel was cut, the vessel has come together block by block. More recently, the work has been focused on the interior spaces with outfitting, including the promenade, bars, lounges, and restaurants.

In the latest update from Royal Caribbean, mounting of the three waterslides and the Ultimate Abyss 10-storey slide at the aft of the ship has begun. The cruise line also says that some of the most challenging work is in the final 5% of construction. Pressure also mounts to make sure Wonder of the Seas will be completed ready for the first guests in March 2022.

Wonder of the Seas will be based out of China from March 2022. The giant new vessel will offer cruises from Shanghai and Hong Kong sailing four- to nine-night itineraries.

P&O UK’s newest cruise ship, the stunning LNG-powered Iona left the Port of Southampton on her first voyage at 9 PM, Saturday evening, August 7, and has returned back home today to complete the maiden voyage.

Iona’s maiden season consists of several cruises to the Scottish isles on the West coast of the United Kingdom. Iona’s maiden voyage cruised around Cornwall and anchored at the vessel’s namesake island for a firework display. After this, the vessel did some scenic cruising.

Iona is not just a much-hyped mega-cruise ship. She is, in fact, one of the most technologically advanced cruise ships in the world. Built at the Meyer Werft in Papenburg, Germany, the vessel is powered entirely by Liquified Natural Gas.

The 184,000 gross ton Iona has space for 5,200 guests who can enjoy 17 different restaurants onboard. Eight are specialty dining restaurants and 12 bars, including the first gin distillery at sea in partnership with Salcombe Gin.

Iona, in the meantime, will be sailing to the Scottish Isles and cruises on a more southerly course called the Southern Short Break, finding some sunshine until the end of September. After this, she will sail on a mix of cruises to Spain and Portugal, The Canary Islands, and Northern Europe.

Norwegian Cruise Line’s newest cruise ship, Norwegian Prima, celebrated a huge milestone in her construction. The cruise ship, which features a distinct straight hull design that gives her a unique presence, was floated out from her drydock at the Fincantieri shipyard in Marghera, Northern Italy, marking the new vessel’s first time touching the water.

The float-out signifies the end of the work that needed to be completed on the hull, including the hull artwork design. The areas that still need to be completed include the interior fittings and guest accommodations before the first Project Leonardo Prima class cruise ship is officially delivered to the Cruise Line and starts operations in summer 2022.

Norwegian Prima will be sailing everywhere from Northern Europe to the North Atlantic and the Caribbean. Following several inaugural cruises, Norwegian Prima will begin sailing in August 2022 from Amsterdam. In September, the ship will sail from the UK, October will see her depart from New York, and November will have Norwegian Prima departing from Miami. Other US departures include Galveston and Port Canaveral.

It sure has been a busy week of cruise news and we’ve got even more big headlines including the Carnival Valor receiving its new livery, Mardi Gras making maiden calls in the Caribbean, Disney Cruise Line resumes sailings out of Port Canaveral in Florida and many more.