It has been confirmed that cruise lines are interested in Bermuda as a homeport. Three cruise ships could be based there from June 2021.

According to government officials in Bermuda, talks are ongoing between the Government and a small luxury cruise line to offer cruises from Bermuda to nowhere.

Mr. W. Lawrence Scott, Minister of Transport, said in a Ministerial statement he has been in discussion with a small luxury line and two other cruise lines for three ships to homeport in Bermuda from June onwards.

According to the transport minister, the cruise lines have been impressed with the handling of the virus in Bermuda. They have therefore approached the British island territory in the North Atlantic Ocean.

Since Crystal Cruises announced it would be sailing from the Bahamas later this year, there have been many confirmations and rumors about other cruise lines to start sailing from various Caribbean islands. As we reported yesterday, it would not take long before other islands have the same ideas.

With flight costs virtually the same between many US states and Florida or the islands, it won’t matter much for the passengers, as long as they have passports to travel. The first signs of re-opening international travel have already been given by the Biden administration, which is said to open more from May.

Bermuda, which is far removed from the Caribbean (1089 nautical miles from Hamilton to Nassau), would offer cruise ships the chance to sail to any of the private islands in the Caribbean and back again within one week cruise or offer cruises to nowhere.

With the Bahamas, St Maarten, Barbados, The British Virgin Islands, Cozumel, and the Dutch Caribbean Island of Aruba all competing for business, it looks like the race is on to attract ships as soon as possible to get a slice of the cake. In the case of Bermuda, this slice could be worth more than $60 million.

Will It Be Safe?

First of all, it remains to be seen if ships will be calling in Bermuda, especially if we look at the distances involved to the Bahamas, where most companies have private islands, and the flight times to Bermuda compared to the Caribbean Islands.

Also Read: IDEAL Things to Do in Bermuda

The safety aspect will be the same procedures as other islands have said they will be adhering to. According to Mr. Scott, there has been a significant framework developed already:

“The Ministry of Transport, being ever so excited about this opportunity and the potential economic stimulus from the cruise ship industry to our economy, has diligently worked with the Ministry of Health to create a framework and response plan to restart the cruising industry safely – ideally starting in June this summer.”

All guests will need to be fully vaccinated. At the same time, Bermuda has a robust and proven COVID-19 response plan to mitigate the virus’s importation through legislation, rigorous PCR Nasal Pharyngeal testing, and contact tracing.

Out of the 196 ships scheduled to sail last year from or to Bermuda, only four made it to the island. According to Mr. Scott, the loss of cruise tourism has a significant impact:

“The cruise ship industry is a key revenue generator for Bermuda. On average, the economic impact from the industry is $170M, with approximately 185 ship calls annually. In 2020 due to the Covid-19 pandemic, the island saw only four calls out of the scheduled 196 projected calls. In 2021, 189 calls were originally projected, and the number of calls continues to dwindle.”

The figures project a loss of 148,778 cruise visitors, the expected average passenger numbers from the canceled ships as shown on the 2020 cruise ship schedule. The Bermuda Tourism Authority’s 2019 estimated average loss of $224 per passenger, while losses of berthing costs, pilotage, provisioning, and more account for the rest.

Based on these numbers, there is every reason for Bermuda to try its best to get the ships to start homeporting here. It will mean a significant boost for the economy. Not only do cruise guests spend around $224 on a regular call, homeporting means guests will need hotel stays, food, flights, and transportation.

Worth Reading: Caribbean Cruise Port to Reopen for Cruises in June

Mr. Scott declined to name any companies when the One Bermuda Alliance asked him. However, he said the Government is involved in talks with three companies: one with a passenger capacity of 900, another with a capacity of 1,400, and negotiating with one more. 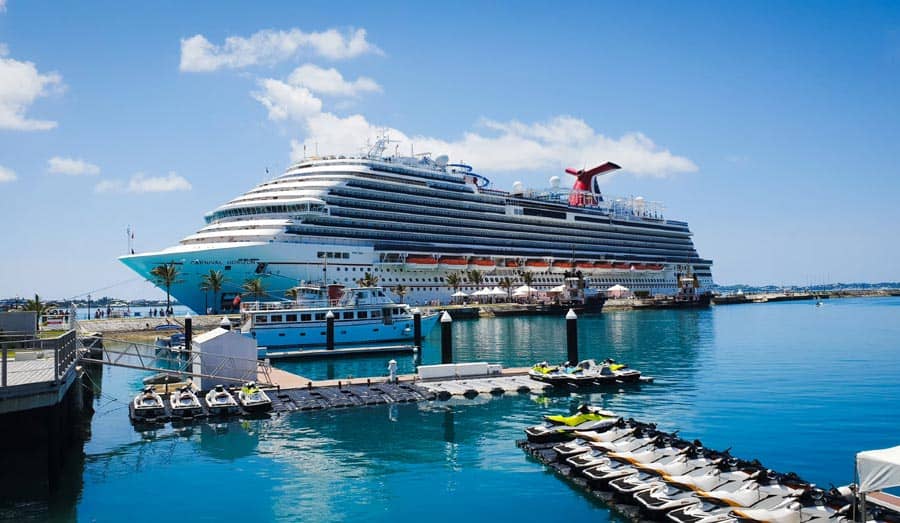