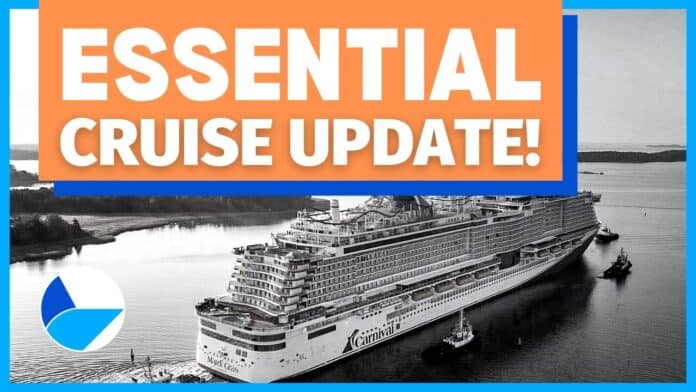 Here we are with another jam-packed week of cruise news that includes some major new developments from the CDC impacting cruises from the U.S. and updates on some new cruise ships.

So it was another busy week of cruise news that included an extended CDC No Sail order, major cruise updates from Carnival Cruise Line, the latest on Holland America’s new cruise ship, and even a false alarm after a reported outbreak on a vessel in Europe.

You also have the choice of watching the video instead to get updated on some major cruise news from the week:

The big news from the week was that the Centers for Disease Control (CDC) finally decided to extend its No Sail order through October 31, 2020.

The extended date is actually kind of good news as the CDC Director Robert Redfield actually wanted to keep the order in place into early 2021! The Trump administration in fact overruled this and that has now resulted in the new extension.

Related: CDC No Sail Order Officially Extended But There’s More to This

Cruise Lines are now planning for a phased-in return to service from November with new health measures in place.

Carnival Cruise Line has announced that all cruises from the United States except for two homeports are cancelled for November and December. So for those two months, there will just be departures from PortMiami and Port Canaveral in Florida.

Carnival will keep those cruises from the two ports in place for now but has warned that could change depending on the constantly developing situation and the impact on the cruise industry.

The hope is that the first sailings will resume in November with new health protocols to make sure guests and crew remain safe. Any guests not wanting to go ahead with their cruise for the last two remaining months of the year do still have the option to get a full refund or a future cruise credit and onboard credit.

Some updates on new cruise ships with Holland America Line celebrating the coin ceremony of Rotterdam which is the third Pinnacle-class cruise ship currently under construction at the Fincantieri Marghera shipyard in Italy. It comes as the ship will be floated out onto the water for the very first time in the coming days. Rotterdam is scheduled for delivery on July 30, 2021.

Carnival’s new Mardi Gras cruise ship has departed on Sea Trials from the Meyer Turku shipyard in Finland. The sea trials are for 10-days to test propulsion systems and make sure the LNG powered vessel is seaworthy. The largest-ever Carnival cruise ship will debut out of Port Canaveral, Florida on February 6, 2021.

Princess Cruises took delivery of the new 145,000-ton Enchanted Princess, the fifth Royal-class cruise ship. The delivery took place at the Monfalcone Fincantieri shipyard in Italy. The ship scheduled to arrive in North America in December 2020.

There was a false alarm on the Mein Schiff 6 cruise ship which is operated by German-based TUI Cruises. 12 crew members had originally tested positive when the vessel was on a Greek cruise.

The mainstream media went crazy in reporting that another cruise ship had an outbreak but that was not the case. They were false positives from a land-based lab. Three further tests took place including two PCR tests and one antigen test.

It was later confirmed by the cruise line and Greek authorities that the crew members had not tested positive for the virus. Mein Schiff 6 was later allowed to continue on her cruise that first started from Crete on September 27.

Costs Smeralda will become the third Costa cruise ship to resume operations following Costa Deliziosa and Costa Diadema based in Italy only. So Smeralda will kick off cruises on October 10 and of course, there will be strict new health measures in place.

The ship will sail five cruises in Italy until mid-November where she will then begin cruises out of Savona to ports in Italy, France, and Spain from November 14, 2020.