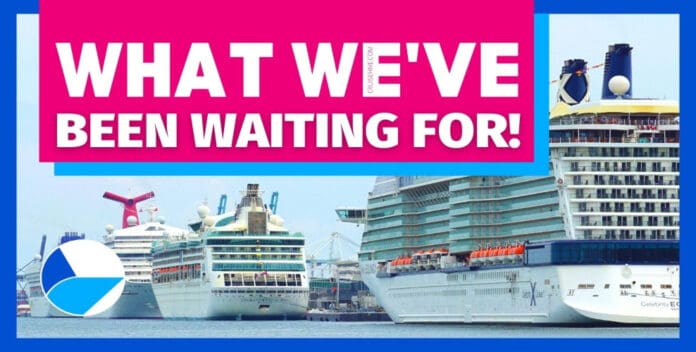 A huge week of cruise news and we’ve got all the major updates including the CDC lifting the No-Sail order and a further ban on cruise ships in Canada.

What a week it was of cruise news and some defining new developments on resuming cruises from the U.S. The CDC finally lifted its No-Sail order and announced a new Conditional Sailing Order. Also, cruise lines respond to the new order and even more major cruise news including updates on Europe, Australia, and Canada.

So the biggest news of the week by far was that the Centers for Disease Control and Prevention (CDC) finally lifted the No-Sail Order! On Friday the CDC announced that the No-Sail Order would not be extended and instead a new Conditional Sailing Order will go into effect.

This effectively gives the green light for cruises out of the U.S. but there will be requirements that cruise lines will need to follow to make sure not just guests and crew but also local areas on land can remain safe and help stop the spread of COVID-19.

The CDC stated in its 40-page report that a careful approach is needed to safely resume passenger operations in U.S. waters. The CDC will ensure cruise lines have adequate protection for crew members and a phased-in return will need to have test voyages first.

So now that cruises will be able to resume from November 1, 2020, it doesn’t mean all cruise lines will suddenly restart cruises. It will be a safe return to service with just a limited number of ships or even just one ship. It all depends on how safely the return can be and the result after some test voyages, it’s all still very fluid.

Carnival Cruise Line has already stated that it intends to spend some time reviewing the new framework of the Conditional Sailing Order and has asked for patience as this may take some time and how it will impact Carnival’s own new procedures and plans. Carnival Cruise Line has cancelled departures in the U.S. for November and is focused on the first official sailings in December.

Royal Caribbean stated that even though the CDC announced a lifting of the No-Sail order there is still a lot to be done between now and then. The cruise line is committed to doing things right including training crew on new health measures and a number of trial sailings to stress-test new protocols.

There’s a lot of new developments coming out now that a new CDC Conditional Order has been announced so do keep checking cruisehive.com for all the latest.

Princess Cruises Extends Suspension Down Under

Now to some other cruise updates starting with Princess Cruises extending its suspension in Australia and New Zealand through May 2021. The decision to cancel more cruises was due to ongoing travel restrictions around the world and the uncertainty on when they might be lifted.

The cruise line has cancelled a total of 52 cruises across four different vessels. Guests who booked on the impacted sailings will be offered compensation options including a Future Cruise Credit. Guests who no longer wish to go ahead with a future sailing can also request a full refund online.

Princess previously announced that the suspension of operations in the region was through December 12, 2020, impacting a total of five cruise ships.

Good news from Asia as World Dream arrived in Singapore ahead of its scheduled cruises starting November 6. The ship, which can carry 3,376 passengers, will be doing cruises from Singapore for Singapore residents only for the time being.

Dream Cruises will be doing what they call Super Seacation Cruises, two and three-night cruises, which will consist of only one or two sea days before returning to Singapore. Singapore becomes the third location in Asia where cruising has resumed, following Japan and Taiwan.

The ship is currently staffed with a skeleton crew that still needs to perform mandatory covid testing before starting their duties. All other crew members who will embark in Singapore will be doing a 14-day quarantine onboard while the ship is cleaned and prepared for guest operations.

The situation in Canada is not getting any better and now the cruise industry there has been hit with a major blow. The Minister of Transport, Honourable Marc Garneau, has announced the ban on cruise ships is to be extended through February 28, 2021.

This comes as the pandemic continues to have a major impact across the country and ensures transportation workers can remain safe during this time. So this does now mean cruise lines can forget about cruises from any Canadian port for a while, including popular ports such as Vancouver.

Any vessels that do not follow the cruise ship ban could be subject to penalties: $5,000 per day for individuals and $25,000 per day for corporations. Cruise ships that carry less than 100 passengers need to follow local rules as there is no national ban for them. Also, other smaller boats are not impacted by the ban.

The ban on cruise ships was originally announced by the Canadian authorities on March 19, 2020. An extension was announced on May 30, which was set to end on October 31, 2020.

On Wednesday, October 28, Chancellor Angela Merkel announced a new lockdown that will go into effect from Monday, November 2. This is due to a sharp increase in COVID-19 infections across the country.

To remain in-line and to help stop the spread of the virus Aida Cruises has temporarily suspended operations for November 2020. This means that all cruises are cancelled between October 31 and November 30, 2020.

AIDA Cruises restarted its cruises on a phased-in basis in mid-October, demonstrating that safe travel is possible by implementing comprehensive protocols for health and safety developed in coordination with national and international authorities and medical experts.

The cruise line first restarted operations on October 17 with the AIDAblu cruise ship in Italy. AIDAperla was to become the second vessel to resume cruises from November 7 and then AIDAstella from December 12.

Costa Cruises which is also owned by the Carnival Corporation has resumed cruises in Europe and has already announced itinerary changes due to the growing number of infections sweeping across the continent.

And finally Costa Cruises, which is owned by the Carnival Corporation, has been forced to make deployment updates due to travel limitations in European countries.

Costa Cruises has announced changes for five cruise ships including the new LNG-powered Costa Smeralda and Costa Firenze, which is currently in the final stages of construction. The cruise line has extended Smeralda’s “Italy Only” sailings until the end of February 2021.

The Costa Firenze cruise ship is currently in the final stages of construction at the Fincantieri Marghera shipyard in Italy. The good news is that she is still scheduled to be delivered in the middle of December 2020. However, the new ship won’t be offering 7-day cruises in Italy, France, and Spain until February 28, 2021.

You can check the full list of itinerary changes for the five Costa cruise ships right here.