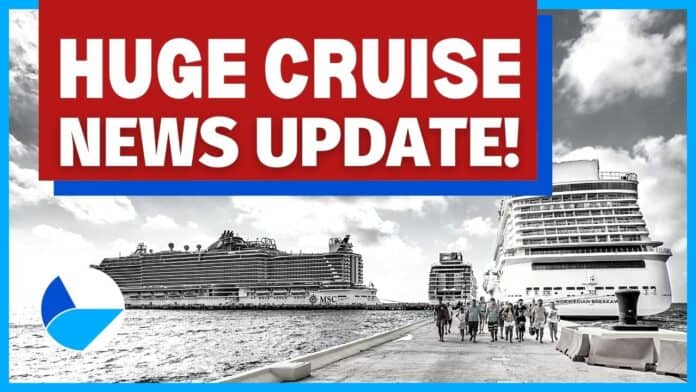 It was another full week of cruise news as most cruise lines have still kept operations suspended and time is running out on resuming cruises from the U.S. before the end of the year.

With just over two and a half months until the end of the year, cruise lines are desperate to resume cruises. However, it’s not that simple with discussions with the CDC and White House to make sure guests and crew can remain safe.

So here are all the major developments in the industry on the resumption of operations and updates on new Carnival cruise ships.

Carnival Cruise Line has opened up bookings for its second XL-class cruise ship named Carnival Celebration. The cruise line has detailed the much-anticipated itineraries including a 14-day voyage out of Southampton and year-round sailings from PortMiami, Florida.

Carnival Celebration will kick off service with a 14-day transatlantic cruise from Southampton, UK on November 6, 2022. The two-week voyage will include calls at La Coruña and Vigo, Spain; Maderia, Portugal; and Tenerife which is part of Spain’s Canary Islands.

The cruise which is actually a Carnival Journeys cruise offers rich cultural experiences from the ports visited such as cooking, arts and crafts and activities. The cruise will end in Miami on November 20, 2022.

Departing out of the cruise capital of the world on November 21 will be a special Thanksgiving cruise calling at Grand Turk, Amber Cove and Nassau.

There’s also going to be two special 8-day cruises departing on December 11 and 19, 2022 calling to Grand Turk, Amber Cove, San Juan, and St. Thomas along with a one-time 5-day voyage to Amber Cove and Grand Turk departing on January 3, 2023.

There is some good news for resuming cruises in Asia for Royal Caribbean as the cruise line has been given the approval to offer pilot cruises out of Singapore. Quantum of the Seas will begin these cruises to nowhere on December 1, 2020, and it will be a way for Royal Caribbean to try out new health measures recommended by the Sail Healthy Panel and requirements from the Singapore government.

These sailings will only be available for Singapore residents and the Quantum-class vessel will offer 3-night and 4-night cruises. Quantum of the Seas will be the first Royal Caribbean cruise ship to resume cruises since the suspension started in March.

While we’re on the topic of Royal Caribbean, the cruise line has also announced it’s extending the suspension on operations globally through November 30, 2020. This impacts Royal Caribbean-owned cruise lines including Celebrity Cruises. The 2020/21 winter program in Australia and Asia is also suspended. However, this doesn’t include the new pilot sailings announced for Quantum of the Seas.

Norwegian Cruise Line is another major cruise company that extended its suspension on operations through November 30, 2020. It does go further than just another month as all voyages for Norwegian Star, Norwegian Spirit, and Norwegian Dawn are canceled through March 2021. Further details are right here.

Carnival’s new mega-ship the Mardi Gras that is currently in the outfitting phase at the Meyer Turku shipyard in Finland has completed her 10-day sea trials. The ship arrived back at the shipyard on Monday and now work will continue with the majority of the focus on completing the interior spaces.

Mardi Gras which is the largest ever ship constructed for the cruise line will finally debut on February 6 after a long delay. The 5,282 passenger vessel is powered by Liquified Natural Gas (LNG) and is over 180,000 gross tons. She’ll feature the first roller coaster at sea and six different themed zones. Mardi Gras will take Carnival into a new era of ship design.

The luxury cruise line Seabourn has decided to cancel the upcoming 2020 and 2021 voyages for three of its vessels into Spring 2021. Seabourn Odyssey, Seabourn Ovation, and Seabourn Encore have all canceled their sailings due to the uncertainty on the global travel situation and so that the cruise line can focus on implementing new health measures for when cruises do resume.

The destination-focused Azamara decided to simply cancel all cruises until Spring 2021. The cruise line would rather just focus on when operations will return with hopefully some normality.

Discussions took place on the CDC No Sail order and the health recommendations from the Sail healthy Panel which was jointly set up by Royal Caribbean and Norwegian Cruise Line. The Cruise Lines International Association (CLIA) has also announced mandatory health measures. These were the main focus of the meeting and making sure cruises can resume safely.

A proposal has been put together from all parties and it will be presented to President Trump with regards to next steps on the CDC’s No Sail order. We’ll just have to watch this space to see what’s decided.