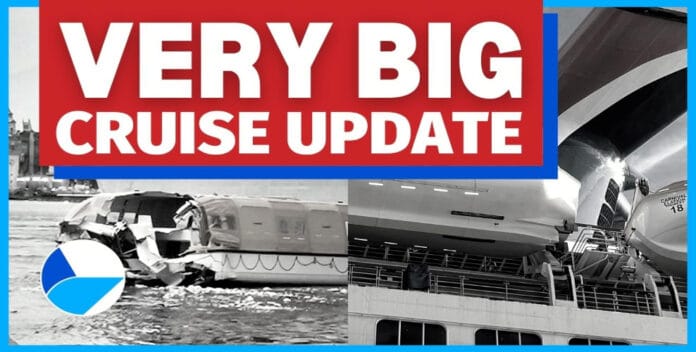 Surprise everyone! Carnival Cruise Line canceled cruises through April 2021. To be honest, it was pretty much expected. What we didn’t expect were some of the other surprising cruise news updates.

What a week it has been with all kinds of cruise news going on! We’ve had more cancellations from major cruise lines, another ship being sold off, another ship crashing into a pier, and some surprising news with an entire cruise line being sold.

So let’s start with Carnival Cruise Line as the cruise line has extended its suspension on U.S. departures through April 2021. Operations in Australia are also suspended through May 19, 2021.

Unfortunately, the further cancellations from Carnival go beyond just May as the cruise line has canceled Carnival Legend’s European itineraries through October 31, 2021.

Carnival’s new Mardi Gras is going to be on hold for even longer as the ship will no longer debut our of Port Canaveral Florida in April. Mardi Gras will now begin cruising from May 29, 2021. Surely the ship can’t be delayed any more after this! She was originally scheduled to debut on August 31, 2020, out of Copenhagen.

Carnival Cruise Line previously announced a suspension on January 6 and there hasn’t been much time between that until the cruise line to extended even further. Impacted guests are being contacted about their options for a future cruise credit and onboard credit or a full refund.

There were dramatic scenes on Friday morning at the Port of Savona, Italy, as Costa Cruises flagship Costa Smeralda made a wrong maneuver that caused damage to the vessel and shoreside equipment.

The vessel is seen coming in to position alongside at a reasonably fast pace when one of the lifeboats is caught against a shoreside crane and ripped from its position. The lifeboat is seen floating around the port area with the ship just meters from the pier side.

The maneuver caused further damage to the terminal silo system and the shore cranes, which were pushed off the rails. One other lifeboat was damaged by the movement of the forward lifeboat that was ripped of its hinges.

What the exact reasons for the incident were are unclear at this point. Police, Harbour personnel, and Port Authorities were all at the scene shortly after the accident happened. Initial reports from the scene of the accident reveal that there was no-one injured, and the only damage was material. As the vessel was on a technical stop, there were no passengers on board.

Parent company Carnival Corporation continues to offload cruise ships, and the latest one is the Pacific Princess from Princess Cruises. The cruise line confirmed on Thursday that the ship has been sold to an undisclosed buyer. It’s unknown if the buyer will sell it on for scrap or the ship will keep sailing in the future.

Guests who had a booking on Pacific Princess will be notified by the cruise line about their options. They’ll be able to book a future cruise or receive a full refund.

Surprisingly Pacific Princess was not the oldest ship in the fleet but definitely the smallest at over 30,200 gross tons. She’s going to be missed by many but unfortunately has become another victim of these difficult times.

SAGA Cruises is a UK based cruise line that caters exclusively to guests over 50 years of age. The company has only two ships, the 58,000 gross ton Spirit of Discovery and Spirit of Adventure.

The cruise line is the first in the world that has made vaccinations a requirement for cruising. Any guests who want to sail onboard one of the two vessels will need to show the cruise line proof they have been vaccinated against COVID-19 at least 14 days before the voyage.

So here are the requirements detailed:

As the cruise line’s guest profile is a higher risk group, it will likely be welcomed by the line’s many regular cruisers. Whether more cruise lines will follow the example remains to be seen.

It’s not looking good for another major cruise line as Norwegian Cruise Line has now suspended operations through April 2021. The first sailings are not expected to restart until May at the very earliest. This impacts the entire fleet and sister brands.

This comes as the cruise company continues to work with the CDC on the framework for the Conditional Sailing Order. NCL has made it clear that it’s working around the clock to do what is right on a safe return to operations.

Like other major cruise lines, it is proving to take longer than first thought on resuming cruises, and with the pandemic still increasing across the United States and around the world, the situation does not look any better.

Norwegian Cruise Line is offering a full refund to guests who had an active booking, and this will automatically be completed by February 22, 2021. The cruise line will also add a 10% off coupon to a guest’s account by January 20, 2021. the coupon can be used for a future cruise embarking through 2022.

The New York-based firm specializes in consumer, distribution, and retail-related investments. The purchase of the luxury cruise line has been reported to have cost $201 million.

Azamara currently sails with three vessels to destinations including Asia, Europe, the Mediterranean, and South America. The Azamara Journey, Azamara Quest, and Azamara Pursuit all measure around 30,277 gross tons, with a total guest capacity of around 680.

It seems that we can always count on MSC Cruises to bring some positive news when other cruise lines seem to have to cancel more and more cruises. Over the Holiday period and New Year, MSC suspended its cruises leaving Genoa, Italy.

The Swiss-based cruise line will now resume cruises from the northern Italian port with the MSC Grandiosa on January 24, 2021.

MSC Cruises has managed to do more cruises than any other cruise line throughout the pandemic. It was the first cruise line to resume sailings in August 2020 and has completed week-long voyages from Italy since then. In fact, the line has not suffered a single outbreak onboard.

MSC Grandiosa will be sailing from Genoa and stop in ports along the way, such as Civitavecchia, Naples, Palermo, and Valetta in Malta.

It was an extremely busy week full of cruise news updates. There are also even more updates to catch up on from this week including how the CDC’s new air travel requirements could impact cruising, Cuba could be a cruise destination for U.S. lines once again and Royal Caribbean ditches the Alaska season for one of its ships.

If you missed it, you can take a look at the sad update from last week right here.