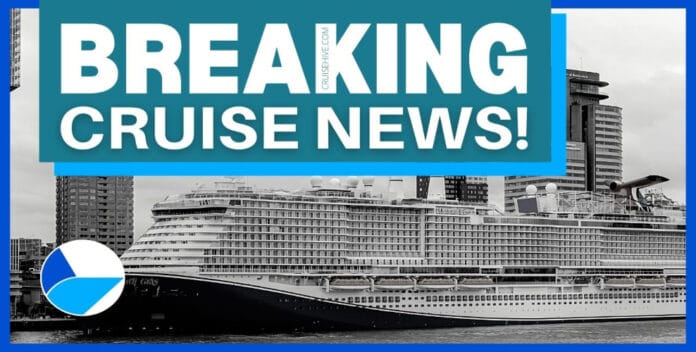 2021 has arrived and that means another year full of cruise news but first, let’s take a look back at the past week and beyond with a mixture of some good and bad news.

Firstly, Happy New Year to you all! We head into 2021 with new optimism, in the coming months, we’ll start to see the cruise industry make a return. Vaccines are rolling out and this will be the year that travel starts to open back up.

We’ve got plenty of cruise news updates for you just in case you’ve been busy taking it easy through the past week. There are more cruise cancellations in March 2021, cancelled cruises in Greece, former Royal Caribbean cruise ship finds new home, Carnival’s new ship makes a first stop, another huge cruise ship delivered and cruise line suffers a huge cyberattack.

Norwegian Cruise Line was planning to resume sailings with three ships in March 2021 but now that’s not going to happen. Norwegian Encore, Norwegian Escape, and Norwegian Joy cruises are cancelled for March and the cruise line is now planning on returning in April at the very earliest.

Guests with an active reservation on the three cruise ships will receive a full refund of what they paid. The process is automatic and will be completed by February 2, 2021. An extra 10% credit is also being offered which guests can use to book a future voyage within one year.

The cruise line has also detailed that guests who were impacted by the cancellations on all other Norwegian ships have already received their Future Cruise Credit.

Empress of the Seas to Cordelia Cruises

Cordelia Cruises, a continuation of the recently shut down Jalesh Cruises, will be operating the vessel in the Indian Luxury market. In November 2020, Jalesh Cruises suspended all of its operations and sold its vessel MV Karnika for scrap.

Cordelia cruises are owned by a company called Waterways Leisure Tourism Private Ltd., which, according to the statement on Linkedin, has also recently acquired the rights to shut down Jalesh Cruises.

Before being sold to Cordelia Cruises, Empress of the Seas was the oldest in the Royal Caribbean fleet. Measuring 210 meters long and weighing in at 48,562 gross tons, she was also one of the smallest, with a guest capacity of 1,840.

Voyages on board MSC Magnifica, which were supposed to start sailing on January 7, 2021, to Greece and the Greek islands, have been postponed once more. The vessel will now operate starting February 14, 2021.

Already on December 7, 2020, Greece announced it would be going into a full lockdown to curtail the effects of the second wave of infections. While Schengen country nationals are still able to enter the country, cruise ships are only allowed to make technical calls at this time.

As it is not sure when the lockdown measures will be lifted, and MSC Cruises expects or thinks it is possible that the lockdown is to be extended, the cruise line has decided to postpone any voyages in Greece until February 14 at least.

MSC Cruises has stated on their website that any guests booked on-board MSC Magnifica can rebook their voyage to MSC Grandiosa. MSC Grandiosa is set to resume her voyages from Genoa, Italy, on January 10, where she will be sailing on a Western Mediterranean itinerary.

The new Mardi Gras has made her first port stop since being delivered by the Meyer Turku shipyard in Finland towards the end of December 2020. On December 22 the Carnival cruise ship arrived in Rotterdam, Netherlands for the very first time.

Mardi Gras is powered by Liquefied Natural Gas (LNG) and Rotterdam was important for refueling the new ship. She is also arriving in Barcelona Spain to take on provisions before her transatlantic crossing to Florida. The ship will be based out of Carnival’s new Terminal 3 facility at port Canaveral and cruises will begin from April 24, 2021.

And while we’re on the topic of new cruise ships, Costa Cruises has taken delivery of the new Costa Firenze. The ship was handed over at the Fincantieri Marghera shipyard in Italy on December 22, 2020. The ceremony took place virtually and was also streamed live online.

The Costa cruise ship that’s inspired by the Florentine Renaissance is 135,500 gross tons and has a guest capacity of 5,200. She’s part of the Vista-class and sister ship to Costa Venezia that entered service in 2019.

Carnival-owned Aida Cruises suffered major IT issues towards the end of December 2020 and it does seem to be a possible cyberattack. This could now be the third major cyberattack against a cruise line in 2020 and shows a worrying trend on keeping systems secure.

The cruise line did post on its social media at the time that it had IT issues but it went well beyond that as it also impacted cruise ships.

The captain of the AIDAmar cruise ship announced over the public PA system confirming the IT issues and that the entire fleet is affected along with the office back in Rostock. The cruise line’s e-mail and phone lines were down and even sister line Costa Cruises had booking issues.

So those are some of the major cruise headlines from the past week and beyond. We have even more breaking cruise news over on cruisehive.com including Mardi Gras being voted most anticipated new cruise ship for 2021, the latest photos of the sold Carnival Fascination, what cruise lines need to get right in 2021, and many more. We’ve also got the winners of the 2020 Cruise Ship Awards, it’s all over on the web site.

Thanks ever so much for taking the time to watch the video. Thanks for keeping with us through a difficult 2020 and if you found this cruise update informative at all then do feel free to subscribe and like over on YouTube. Thanks again everyone and I’ll see you soon.