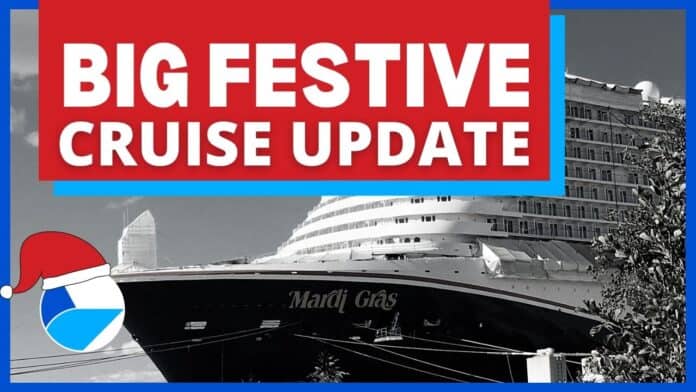 We’re in the festive season, so it’s time to start thinking of 2021 and that long-awaited recovery of the cruise industry, but just before all that, we’ve got some major cruise news that you really need to know about.

In this week’s update, it’s pretty much been a mixture and the festive spirit is starting to take hold with Santa getting in on the cruise fun and even the Grinch spreading joy. Also, there is a downside with even more cruise cancellations and the departure of two cruise ships that first entered service in the early 90s.

We begin with Carnival Cruise Line with further cancellations impacting one ship based out of Australia. Carnival Splendor cruises departing between March 25, 2021, and April 19 will no longer take place. Sailings for the Carnival Spirit remain suspended through May 16, 2021.

The cruise line is communicating with guests who are impacted and offering compensation options. Guests can receive a 100% Future Cruise Credit if booked by May 31, 2021, for a sailing by 30 April 2023. A full refund can also be requested if guests no longer want to go ahead with their vacation in the future.

Some exciting news from MSC Cruises about four ships that will sail from Florida for the 2021-22 Winter season. The ships will be sailing to the Bahamas and the Caribbean including from a new homeport for MSC and the new flagship.

Following the MSC Seashore’s inaugural season in the Mediterranean, the ship will head across the Atlantic for the 2021-22 winter season. The new Seaside EVO class vessel will start cruising from Miami, Florida in November 2021. The vessel will alternative between 7-night Eastern and Western Caribbean itineraries.

MSC Armonia will be offering 3-, 4- and 7-night cruises based out of Miami, Florida. The ship will be sailing to Ocean Cay in the Bahamas and even include some overnight stays.

Related: 9 Things to Do on the MSC Meraviglia Cruise Ship

MSC Meraviglia will homeport in Port Canaveral. She will offer a mixture of shorter 3- and 4-night cruises as well as 6-, 7-and 8-night cruises (starting November 2021) with full-day calls in the Mexican ports of Costa Maya and Cozumel.

MSC Divina will also homeport out of Port Canaveral but will shift to PortMiami in December 2021.

Another good sign that the cruise industry is making a comeback! Carnival Ecstasy, Carnival Liberty, and Carnival Freedom all returned to PortMiami to start preparing for the resumption of cruises.

The real work now begins to get these ships ready for passenger sailings and to do it safely. Carnival Cruise Line needs to follow the framework on the CDC Conditional Sailing Order and requirements for getting crew members back to the ships.

The CDC has already updated its list of approved cruise ships for the U.S. Carnival Ecstasy, Carnival Liberty and Carnival Freedom all have a provisional green status which means the ships have not submitted a signed attestation for the crew to travel commercially. The list is updated weekly by the CDC.

Keep checking cruisehive.com for all the latest on the Carnival cruise ships that are arriving back to the United States over the coming weeks. The cruise line currently aims a limited restart of cruises from March 2021.

Well, we knew it would just be a matter of time even if the cruise line said earlier in the year it had no plans to sell any ships. Royal Caribbean has sold Empress of the Seas and Majesty of the Seas to an undisclosed buyer and they will be leaving the fleet towards the end of December 2020.

The good thing is that they are not being scrapped as the buyer is set to release plans on future sailings at a later date.

Empress of the Seas first entered service in 1990. The 48,500 gross ton vessel originally named Nordic Empress was the first purposely designed for 3- and 4-night cruises with her initial sailings to the Bahamas out of Miami, Florida.

The ship is known as the first to kick of cruises out of Bayonne, New Jersey from the new Royal Caribbean cruise terminal that opened in 2004. The ship also was the first in the fleet to offer cruises to Cuba.

The Majesty of the Seas is the second oldest in the Royal Caribbean fleet and entered service in 1992. Part of the Sovereign-class of ships, she’s remained in the fleet all this time offering memorable cruise vacations.

The 73,900 gross ton vessel was the third in her class and at the time was a true mega ship for Royal Caribbean. She helped take the cruise line into a new era of cruising with new innovative features. She first started cruising from Miami with 7-night Western Caribbean cruises.

Although the ship is not sailing until April 24, it is a massive step for the Cruise Line as they will now be able to start preparations for its first sailing. The vessel delivery had already been postponed multiple times and was originally scheduled to debut in August 2020.

Mardi Gras features six distinct themed zones that will offer something for everyone. With the French Quarter, La Piazza, The Summer landing, The Lido area, the Atrium, and the playground, there will be more than enough to do for anyone and everyone. Guests will have the choice of more than 2,600 staterooms and 180 suites across eleven categories.

The Carnival cruise ship features the first roller coaster at sea called the BOLT. It offers a thrilling experience for guests with an 800 foot-long track including a hairpin curve around the iconic Carnival funnel and reaching speeds up to 40 miles an hour.

The new mega-ship is the first in the fleet to be powered by Liquified Natural Gas (LNG). She is 180,000 gross tons with a guest capacity of 5,200 along with 2,000 crew members. She will be sailing Caribbean cruises out of the new Carnival Terminal 3 at Port Canaveral, Florida.

Santa Has Some Fun!

And finally, while we’re on the topic of the newest member of the Carnival fleet, Santa himself managed to find some time out of his busy schedule to try out the BOLT roller coaster. This was done just days before the ship was delivered by the shipyard to the cruise line.

ant even took time to head to Royal Caribbean’s only ship that is currently sailing. He had a go at the FlowRider onboard the Quantum of the Seas which has already resumed cruises out of Singapore. It came as no surprise that Santa was a real pro on the surf simulator and looked right at home. Unfortunately, he could not stay too long as the big day approaches and he really needs to get all those gifts ready for delivery.

And while we’re on the topic of Christmas, Carnival completed its Operation Happy Holidays by delivering more than 10,000 Christmas cards to crew members. Even the Grinch managed to share some festive joy by helping with deliveries across the fleet. The cruise line released some photos which you can check out over on cruisehive.com.

Alright then, those were just some of the news stories from the week, we’ve got everything you need to know over at cruisehive.com including Royal Caribbean simplifying Future Cruise Credits, 17 MSC cruise ship deployment details for summer 2022, further delays for UK cruise lines, calls for international travel to reopen before vaccines, two Celebrity Edge-class ships to sail Europe during Summer 2022, a cruise line hit with a serious cyberattack, video messages from cruise line CEO’s and more!

It sure was a busy week of news and we’ll keep updating you through the holiday season, last week’s weekly update can be found here.