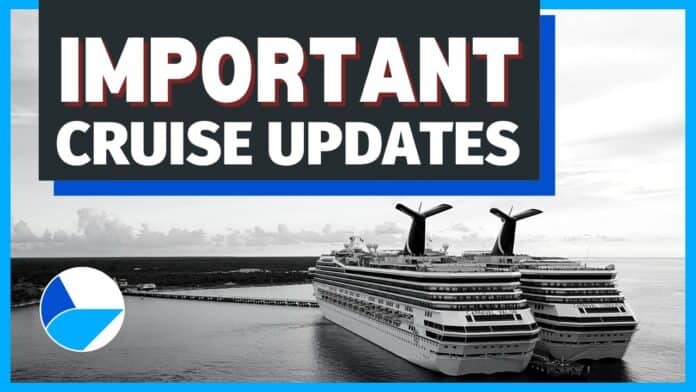 What a week of cruise news it has been! It’s time to catch up on some of the major headlines from the week. There was a mixture of updates and further suspensions, something which is becoming the new norm these days.

Plenty to go through then with a wide range of updates across the global cruise industry including a COVID scare onboard Quantum of the Seas out of Singapore, more cancellations in the UK and Australia along with more delays from Carnival Cruise Line and Virgin Voyages. Will it ever end? Let’s hope so and let’s get started.

Cunard announced they would be extending their pause on operations further into 2021. The only ship that is not affected by the extension is Queen Victoria, which had already had her voyages postponed until May 17, 2021. So here is when each vessel currently plans on resuming cruises:

The company had initially planned to have an extension until March 2021; however, lockdowns, travel restrictions, and the second wave of infections have prevented that.

The news is not surprising as by now, virtually all cruise lines have extended their operations pause, and the world-famous UK to New York route cannot open due to cruise bans in the United States and the United Kingdom.

There was an important update from Virgin Voyages as the cruise line has delayed its only two cruise ships further into 2021. Scarlet Lady which is still waiting to officially be named is now set to debut in the U.S. on May 9, 2021. Sister ship Valiant Lady which is in the final stages of outfitting will begin cruising from November 14, 2021, she was originally set to debut in the summer of 2021.

These setbacks come as work continues on the new Virgin Voyages cruise terminal at PortMiami. On Friday we posted newly released photos over on cruisehive.com, you can take a look at how the development is coming along. The terminal is scheduled to be completed in November 2021.

Carnival Cruise Line has extended its suspension in Australia just after it was announced that the country’s cruise ban is to be extended into March 2021. Two ships will now have to remain on hold for even longer, with a limited number of cruises cancelled.

Impacted guests are being contacted by the cruise line about their options which includes a full refund or a Future Cruise Credit along with onboard credit depending on the length of the cruise.

We already knew the cruise ships would not be sailing on the initial restart in March 2021 along with the Carnival Radiance which is still set to undergo a huge makeover in Cadiz, Spain.

We now come to the biggest headline of the week and oh my did the mainstream media go overboard on this one! Within minutes of a possible COVID case on Royal Caribbean’s Quantum of the Seas cruise ship all the major outlets had coverage on it.

Well, it ended up being a false positive and the 83-year-old male passenger did not have the virus after multiple tests. When the guest did show to have the virus after the initial test he was immediately isolated and all those who had close contact were tracked and also isolated. The false-positive brought the 4-day voyage to nowhere to come to a halt and head back to the cruise terminal in Singapore.

Quantum of the Seas started sailing out of Singapore on December 1 and the ship was the first in the fleet to do so since March 2020. The good news is that the ship will continue to sail from Singapore and this COVID scare won’t impact future sailings from the port.

We’ve been covering the Royal Caribbean ship since it was first announced she would start sailing from Singapore.

The new air filtration system technology will feature continuous active COVID disinfection through bi-polar ionization in the air and on surfaces, an all-natural solution with no harmful chemicals, radiations or by-products.

The system is thanks to a partnership between Norwegian Cruise Line and AtmosAir Solutions. The system has been tested by a world-leading preeminent laboratory and it’s confirmed that the presence of the virus was reduced by 99.2% within 30 minutes.

All kinds of viruses, bacteria, spores, and volatile organic compounds can be reduced. This is great for future cruises as we could even see a reduction in general colds, flu, and even norovirus too.

More to Catch Up on

Alright then everyone, those were just a handful of news stories of the week. We’ve got plenty more including a message from Carnival president to crew members, Princess Cruises expands its “Book with Confidence” policy, second Carnival cruise ship arriving in Florida, more delays announced by Disney Cruise Line, and more.

If you need to recap on last weeks updates you can head here.