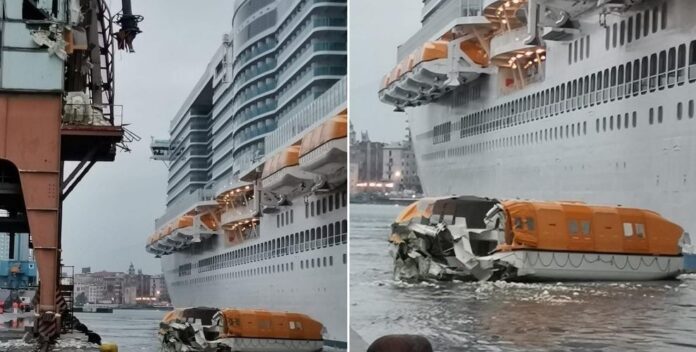 Dramatic scenes on the morning of January 22, 2021, in the port of Savona, Italy, as Costa Cruises flagship Costa Smeralda made a wrong maneuver that caused damage to the vessel and shoreside equipment.

In the meantime, it seems that Costa Cruises has also decided to cancel all voyages until March 12, 2021, due to the severe restrictions in place in Italy due to the COVID-19 pandemic.

The accident, which happened during the early morning hours of Friday, January 22, 2021, caused massive damage to the ship and several shoreside structures as the ship made a maneuver upon docking and struck the pier.

On videos first published on the Italian website Savona News, the vessel is seen coming into position alongside at a reasonably fast pace when one of the lifeboats is caught against a shoreside crane and ripped from its position. The lifeboat is seen floating around the port area with the ship just meters from the pier side.

The maneuver caused further damage to the terminal silo system and the shore cranes, which were pushed off the rails. One other lifeboat was damaged by the movement of the forward lifeboat that was ripped off its hinges.

What the exact reasons for the incident were are unclear at this point. Police, harbour personnel, and port authorities were all at the scene shortly after the accident happened.

Whether the ship will be allowed to continue sailing is unclear at this moment; however, as essential safety equipment was damaged during the crash, it seems unlikely.

Initial reports from the scene reveal that no one was injured, and the only damage was material. As the vessel was on a technical stop, there were no passengers on board. You can see one of the first videos posted online as the accident happened:

5th Largest Ship in the World

Costa Smeralda is Costa Cruises’ flagship vessel and the largest vessel the company has ever sailed with. The Excellence class ship, a sister ship of Carnival Cruises’ newest vessel Mardi Gras, is an LNG-powered vessel that was delivered in 2019.

The arrival of Costa Smeralda made her the fifth largest cruise ship in the world, measuring 185,010 gross tons and 337 meters long.

The news of the accident comes on the same day that Costa Cruises decided to postpone the restart of its ships until March 13, 2021.

The company believes that the current set of restrictive measures implemented by the Italian government does not allow it to guarantee guests an adequate experience of shore visits and the possibility to fully explore the beauty of the destinations visited.

Costa is therefore planning to resume operations on March 13, 2021, with the Costa Smeralda, offering 3- and 4-day mini-cruises, or alternatively a full 7-day cruise, calling at Savona, La Spezia, Civitavecchia, Naples, Messina, and Cagliari. Whether the accident will influence that decision remains unclear.

As a result of this postponement, all cruises originally scheduled on the Costa Deliziosa, Costa Firenze, and Costa Luminosa between February 1 and March 12, 2021 are cancelled. Costa is in the process of informing travel agents and guests affected by the changes.

While Costa Cruises has not put out any official statements regarding the incident, it will not be welcomed by the cruise line. The Italian cruise giant, part of Carnival Corporation, has been one of the few cruise lines that have been reasonably steady and successful with cruises during the pandemic, until the recent stop in operations.

One thing is sure, although only material in nature, this accident will not do the company’s safety record much good.