Construction Begins On Spectrum of the Seas Cruise Ship

Construction has started on Spectrum of the Seas, the first Quantum Ultra class ship which will arrive in 2019 for Royal Caribbean.

So it has now been confirmed that the same of the first next generation Quantum class ship will be Spectrum of the Seas. The name has been rumored for some time along with other names including Melody of the Seas.

“Today is a very special day in the development of our new Quantum Ultra ship, Spectrum of the Seas. We are now one step closer to delighting our guests in Asia Pacific with this remarkable ship.”

“Spectrum will be another giant leap forward in vessel design and guest experiences that will provide travelers with ample opportunities to create unforgettable memories.”

Construction has now officially started on the Royal Caribbean cruise ship at the Meyer Werft shipyard in Papenburg, Germany. A ceremony was held at the shipyard where the first piece of steel was cut. The steel will make up the large blocks which will come together over time to make the ship whole.

Spectrum of the Seas First Steel Cutting
1 of 9

Spectrum of the Seas will be the next evolution of the hugely popular Quantum class ships. The future vessel will expand on the design and known as the Quantum Ultra-class. Royal Caribbean has not yet released any renderings or specific details on the ship so we’ll just have to hold on for now.

Spectrum of the Seas will be at least 167,000 gross tons and carry over 4,100 guests at double occupancy. 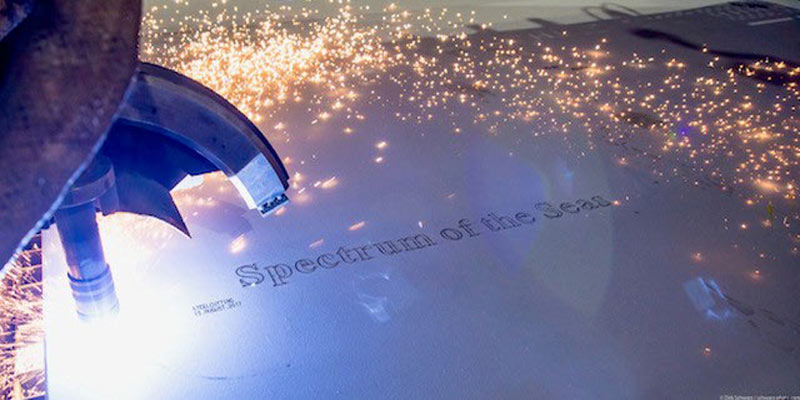