Celebrity Cruises has celebrated the naming ceremony of the hottest new cruise ship of the year named Celebrity Edge. The new class vessel had her naming ceremony at Port Everglades, Florida on Tuesday.

The naming ceremony of Celebrity Edge which is the hottest new cruise ship of the year was held at Port Everglades, Florida on Tuesday. The cruise line marked the christening with godmother, Nobel Peace Prize Laureate Malala Yousafzai. Celebrity Cruises has partnered with the Malala Fund and support them in their mission to see the 130 million out of school girls around the world get the 12 years of free, safe, quality education they deserve.

Over 3,000 guests, employees, crew members, and students came together to help celebrate the first new Celebrity cruise ship in six years. This is also the first new class vessel for the cruise line in ten years.

“I am so very proud to have Malala Yousafzai as godmother of Celebrity Edge. Malala embodies our commitment to opening the world through education and gender equality. Seeing her aboard our ship sends a powerful message to our crew who represent over 70 diverse nationalities, and our guests who we sail all over the world.”

“The ceremony today was both touching and symbolic of what Celebrity Cruises stands for. I am grateful to Malala, her family and Malala Fund for embracing today’s events and look forward to continuing our work together around the world.”

At the naming event, hosted by noted designer Nate Berkus, emotions ran high when acclaimed recording artist Andra Day took to the stage for empowering renditions of her Grammy-nominated single “Rise Up” and Oscar-nominated single “Stand Up For Something.” Both anthems were chosen for their bold statements about the power of girls’ education and its role in shaping the future.

The brand chose to forego the traditional champagne bottle at the launch, and instead smashed a custom-made 18-liter bottle of Badoit French mineral water across the ship’s Parabolic Ultra Bow. And with that, the ship’s long-awaited inaugural season will get underway, ushering in the premium cruise line’s first new ship series in more than a decade – and sparking a revolution in the industry, with the ship’s cutting-edge design and first-at-sea offerings.

Celebrity Edge will begin her inaugural season sailing alternating seven-night eastern and western Caribbean itineraries before transporting guests to the stunning vistas of the Mediterranean with a range of seven- to 11-night sailings from iconic cities like Barcelona and Rome in 2019. Sailing round-trip from Fort Lauderdale, Florida, Celebrity Edge will make her first maiden voyage on December 9, 2018.

Building on Celebrity Edge’s incredible momentum, she’ll be joined by Celebrity Apex in 2020, and two additional sister ships in 2021 and 2022. 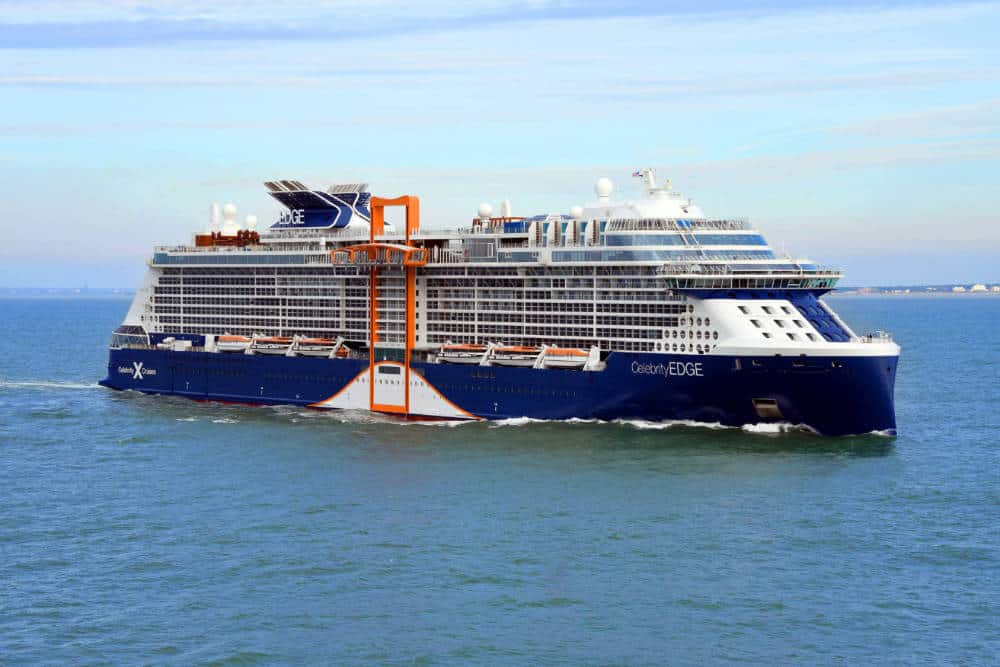