Carnival’s newest and largest addition, ‘Mardi Gras‘, made her debut at sea today as she headed out for sea trials. The ship, which is being built at the Meyer Turku Shipyard in Finland, will be Carnival’s largest addition to the fleet.

The sea trials follow a difficult period in the conception of the ship. With steel cutting taking place two years ago in November 2018, Carnival had initially planned the ship to start operations from August 31st onwards. The ship’s debut has now been pushed back to February 2021.

Mardi Gras departed the shipyard on Monday morning and is out at sea for ten days. Some testing has already taken place at Airisto, Finland.

Sea trials are, in essence, the final phase of construction. The vessels’ seaworthiness is tested to ensure all specifications meet the engineers’ and designers’ intentions. Depending on what needs to be tested, this could take several weeks or months.

With all the newest technology that Carnival has added to Mardi Gras, several sea trials over a month would certainly be in line with expectations. Of course, this certainly has to do with the fact that Mardi Gras will run on LNG, a first for a U.S. based ship. With the vessel running on LNG and not heavy fuel oil or HFO, emissions will be cut by more than 25%.

Once she does come out of sea trials and is launched in February next year (barring any more delays due to the pandemic), Mardi Gras will be a sure favorite with Carnival Cruise lovers worldwide.

As we reported this week, the vast Mardi Gras Grand Central Atrium will be one of the most innovative additions to a cruise ship, featuring easy access to Bonsai Sushi and Bonsai Teppanyaki, Piano Bar 88, and the Punchliner Comedy Club.

Not only that, Mardi Gras will feature six distinct themed zones that will offer something for everyone. With a ship called Mardi Gras, the French Quarter cannot stay behind, of course. Bars, restaurants, and eateries that genuinely reflect the culture and history of New Orleans, and a New Orleans Jazz club are all included.

On La Piazza, you are instantly transported to Mediterranean Italy with family restaurant ‘Cucina del Capitano,’ the 24-hour pizza place ‘Pizzeria del Capitano,’ a seafood restaurant and a classic Italian cocktail bar serving coffee’s by day and Negronis by night.

The Lido area will offer even more restaurant options with ‘Guy’s Burger Joint,’ ‘The Seafood Shack,’ ‘Bluelguana Cantina,’ and even more.

Of course, the most eagerly anticipated area onboard Mardi Gras will surely be the Ultimate Playground. With the largest Carnival WaterWorks water park at sea, a vast SportsSquare, and a roller-coaster. ‘Bolt’ will be the first roller-coaster launched at sea with an 800-foot track where you will achieve speeds of 40 miles per hour.

Mardi Gras will be launched on February 6th next year if all goes well. The official launch is taking place in Port Canaveral.

Mardi Gras will have her permanent homeport in Port Canaveral. Here the port authorities are building a $163 million new terminal that will accommodate the 5286 passengers and 2000 crew members on board.

Also Read: Behind the Scenes Look Inside the New Carnival Mardi Gras During Construction

Her inaugural season will take her on 7-day voyages from Port Canaveral, followed by a day at sea, Cozumel, Costa Maya, Roatan, and two more days at sea. So there will be plenty of time at sea to enjoy all aspects of the ship from top to bottom.

So start planning your trip and start dreaming about that return to cruising. Because with Mardi Gras, it surely will be an experience that exceeds fun, or as Carnival calls it: Fun Fueled Vacation Innovation. 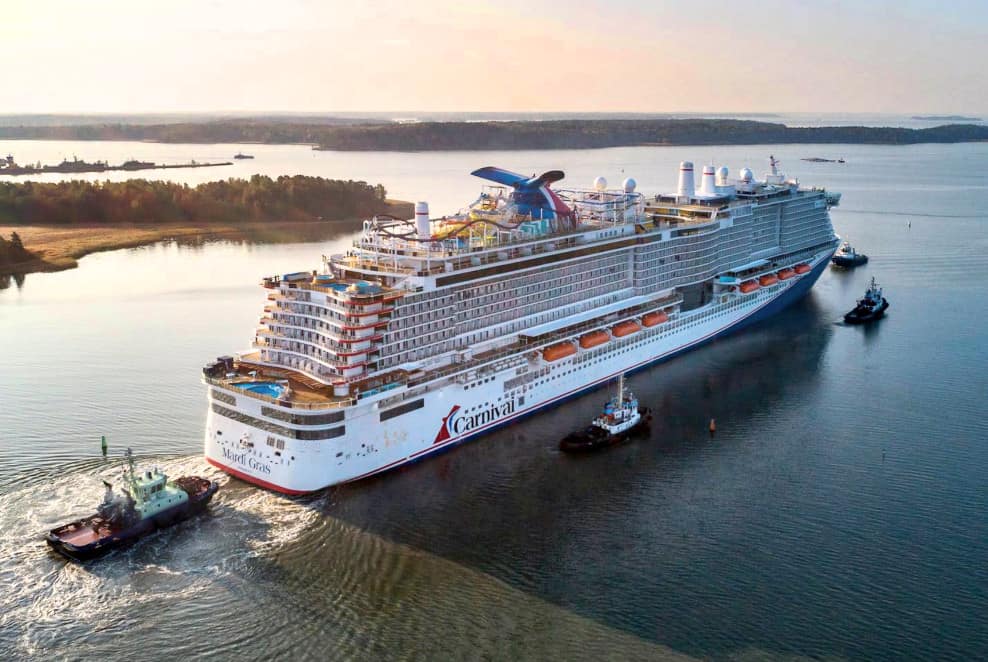