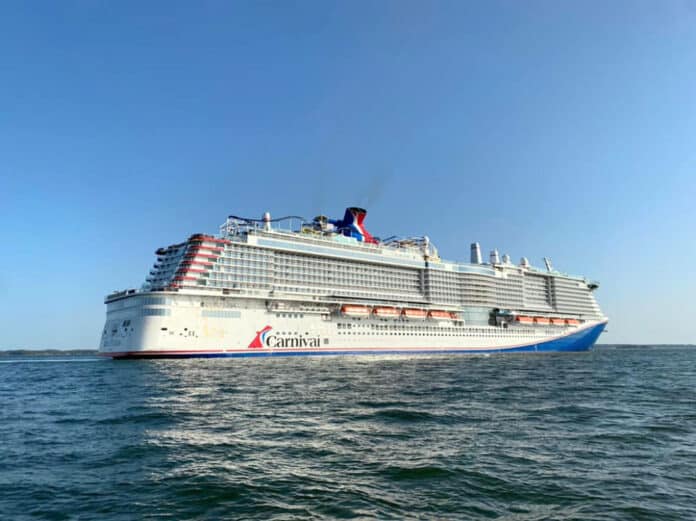 Carnival Cruise Line announced last week that it was postponing the launch of the long-awaited new arrival, Mardi Gras, for the fifth time in over a year.

The update afterward from Christine Duffy in her video message did not uncover much more than that the Cruise Line anticipates seeing Mardi Gras arrive in the U.S. shortly.

When that will remain uncertain as the ship is still moored in Barcelona. The vessel has been here for the last few weeks since she arrived from Rotterdam and her handover in Finland in December.

Carnival Cruise Line announced four years ago that it would be building two new LNG-powered ships. These ships would be part of a program initiated by Carnival Corporation that would involve, to date, nine ships under the new LNG class umbrella.

It wasn’t until November 2018 that the first steel was cut for the vessel, more than two years after the first news came out. After that, the building went fast, with the traditional coin ceremony taking place in June 2019. The vessel floated out of the yard for outfitting at Meyer Turku, Finland, on January 24, 2020, seeing water for the first time.

The vessel was finally delivered on December 18, 2020. But that’s where the good news ends. Since its conception 4.5 years ago, Mardi Gras has been tainted by interruptions, cancellations, and postponements.

Murphy’s law states that ‘Anything that can go wrong, will go wrong.’ It seems Mardi Gras is the poster girl for the saying. Originally scheduled to sail for the first time from Copenhagen on August 31, 2020, Carnival Cruise Line canceled these cruises just before the holidays in December 2019.

Stating shipyard-related delays, Mardi Gras’ launch‘s delay meant that the first eight planned sailings were postponed. Among them were routes around Europe, a transatlantic voyage, cruises based in New York, and cruises from Port Canaveral. The maiden voyage would now take place on November 14, 2020.

November came, and November went, as Carnival announced already in July 2020 that Mardi Gras would now enter into service from Port Canaveral on February 6, 2021.

According to President Christine Duffy, delays due to the pandemic caused the shipyard to fall further behind schedule:

“While we had hoped to make up construction time on Mardi Gras over the summer, it’s clear we will need extra time to complete this magnificent ship.”

In early December 2020, only two weeks before Mardi Gras officially took delivery of the vessel, another delay occurred. This time cruises were pushed back to April 24, 2021. In January 2021, another announcement came; Mardi Gras was delayed until May 29, 2021.

Lockdowns and the CDC

The update from Carnival on January 22, 2021, and Arnold Donald’s comments a few days later were clear. Mardi Gras delayed again. The reason this time? The CDC not yet providing essential details on how to resume service, while lockdowns in Europe have delayed Mardi Gras‘ departure from Barcelona, according to Christine Duffy:

“We are certainly committed to welcoming them (guests ed.) back as quickly as possible, but unfortunately, we have determined it’s going to take a while longer, and the situation in Europe will also impact Mardi Gras’ departure to the U.S.”

Vaccines But No Sailings

More than one year after the vessel floated out of the yard in Finland, we are still waiting for the vessel to be inaugurated by Carnival Cruise Line. Despite the arrival of multiple vaccines and a swift rollout in the U.S., cruise ships are still not sailing. Christine Duffy explained in her announcement she expects that cruising will be able to resume at some point.

“With the news that the vaccine will be widely distributed, and available to most Americans starting this spring. There is a growing sense that many activities including cruising will be able to find a secure route to return.”

According to Christine Duffy, the wait will be a little longer, and we have to be a bit more patient. In her video message this week, the president quickly broached the subject of Mardi Gras, hinting the vessel would be arriving in the U.S. shortly. When she finally arrives, she is expected to sail on her maiden voyage on June 5, 2021.

Her itinerary will see Mardi Gras leave on a 7-day voyage leaving from Port Canaveral, a day at sea while sailing to San Juan, Amber Cove, and Grand Turk, before returning to Port Canaveral with another day at sea.

As it stands at this time, we have cruises resuming in more and more destinations. Singapore, the Canary Islands, and Taiwan all have cruises, while Royal Caribbean confirmed sailings from Israel with fully vaccinated guests from May 2021 onwards. We can hope that we can include sailings from U.S. ports to that list and with that the long-awaited maiden voyage of Mardi Gras.

The new mega-ship is fully powered by Liquefied Natural Gas (LNG) and is over 180,000 gross tons. She has a guest capacity of 5,282 at double occupancy along with 1,735 international crew members.