Carnival Vista, the largest ship built for Carnival Cruise Lines has started sea trials from the Fincantieri shipyard in Trieste, Italy. When a ship is under construction the sea trials are one of the last major milestones before being delivered to the cruise line. At around 10 AM the ships mooring lines disconnected from the dock. Not long after that the Carnival Vista set sail.

Senior Carnival cruise director John Heald has been keeping everyone updated on his popular Facebook Page. Thanks to john there are some great photos as the Carnival sets sail:

Carnival Vista Lido and Waterworks Would you go down those exuberant giant slides ? Please answer yes or no

During the sea trials the new class ship will undergo several propulsion and maneuverability tests, making sure the ship is sea worthy and in perfect condition to begin cruises.

“The sea trials are a very important part of the new building process. Why? Because it is the only time you can test everything of the ship, and test each equipment at the extreme condition. As a sample, the Crash Stop, which means we run the ship at maximum speed ahead and then stop to check to see how much time and distance we need to stop the ship. We also have “listing and stabilization tests which are very intense.

Our team is also checking all of the different equipment on the bridge, fire suppression system, life saving equipment, etc. It is an exciting time John.”

The crew for Carnival Vista will begin arriving at nearby hotels on April 12. Once the ship is ready for them the crew will transfer to cabins onboard. The crew will gradually increase over the weeks with more important crew arriving earlier. The staff and crew will begin setting up their work spaces ready for the first cruises in May.

Carnival Vista’s maiden voyage will be from the shipyard in Trieste, Italy on May 1. The 133,500 gross ton vessel will spend its inaugural season sailing in the Mediterranean before crossing the Atlantic for cruises out of New York City beginning in November 2016. 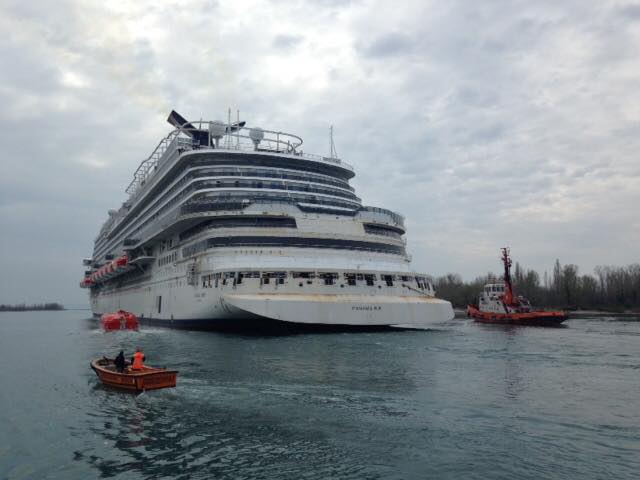