Carnival Sunrise Has Officially Been Named in New York

The newly transformed Carnival Sunrise has officially been christened during a ceremony in New York City.

The freshest Carnival Cruise ship in the fleet has finally been officially named during a lavish ceremony in the Big Apple. On May 23 the Carnival Sunrise was named after its huge $200 million transformation from Carnival Triumph during a dry dock in Cadiz, Spain

Carnival Sunrise godmother Kelly Arison christened the ship and was at the center of the festivities. Kelly is the daughter of Carnival Corporation Chairman Micky Arison and his wife Madeleine who became the godmother of the ship when it originally joined the fleet in 1999 as Carnival Triumph.

Kathie Lee Gifford who has long been involved with Carnival Cruise Line starting from the early”Fun Ship” TV ads and being the godmother for Carnival Celebration in 1987 and Carnival Ecstasy in 1991 was also apart of the event in New York.

“To be a part of Carnival Sunrise’s official naming is more than I could have ever imagined and an experience I’ll never forget.”

“The ship is absolutely beautiful, and I’m so honored to not only carry on my family’s legacy as godmother but to also use this opportunity to raise awareness for a well-deserving organization, the Ehlers-Danlos Society.”

Instead of the traditional champagne bottle smashing against the ship hull, an “uncorking” was done. A four-foot high confetti-filled bottle was used to mark the historic occasion. There was a video featuring players from the Miami Heat team which is owned by Micky Arison. The footage also featured an appearance by Carnival’s Chief Fin Officer Shaquille O’Neal.

“The planning for this project began more than two years ago and involved 7,000 people who worked together to deliver this amazing transformation. We are so excited to welcome Carnival Sunrise to the Carnival Cruise Line fleet – she is already winning over our guests and providing so many new ways to Choose Fun.”

“It has also been such a special and unique opportunity to have Madeleine Arison, who served as godmother at the original delivery of this vessel 20 years ago, pass the honor of serving as godmother to her daughter Kelly during our official naming ceremony today.”

The upgraded Carnival cruise ship which is now part of the Sunshine-class has some of the best features in the fleet including a popular Guy’s Burger Joint, new WaterWorks, Alchemy Bar, Guy’s Pig & Anchor Bar-B-Que, an adults-only retreat and more.

The ship already made its debut from Norfolk, Virginia on April 29, 2019 and will now spend a summer of cruises from New York. the ship will offer four-day to 14-day itineraries and will then reposition to Fort Lauderdale, Florida for the winter season sailing to the Caribbean and Bahamas from October 2019. Starting in Spring 2020 the vessel will head back to New York. 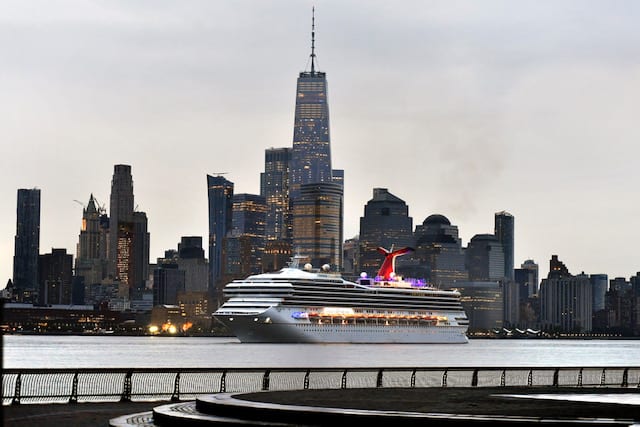