The Carnival Freedom has come to the rescue of a sinking raft just of the coast of Florida. The raft had 29 refugees onboard from Haiti.

While the large Carnival cruise ship was sailing back to its homeport in Fort Lauderdale, Florida it encountered a sinking boat full of refugees. Several passengers onboard the Carnival Freedom have posted videos and photos as the events unfolded.

Texas state representative Matt Schaefer was actually cruising on the ship at the time and also witnessed as the Carnival Freedom assisted with help.

In a statement from KLTV Scheafer says that the ship got right up close to the sinking boat and it seemed that the people onboard had no food or water. Crew from the Carnival ship did give them food and water supplies while the boat waited for the US Coast Guard to arrive. Schaefer also says that the Haitians “had pails and could see this very clearly because they got right up to the cruise ship. They were pailing water.”

Below is a short video posted on YouTube from a passenger onboard Carnival Freedom and you can really see from the footage how small the sinking raft was:

Cruise Hive has received a statement from Carnival Cruise Lines:

Last evening while Carnival Freedom was en route back to its home port of Fort Lauderdale the ship was alerted by the United States Coast Guard (USCG) about a vessel in distress with 29 people on board.  As part of a longstanding maritime tradition of assisting mariners at sea, Carnival Freedom deviated course to assist the vessel in distress until a USCG cutter arrived on site.

Carnival Freedom was released by the USCG and then proceeded to Fort Lauderdale where it arrived this morning as scheduled. The ship will depart on an eight day cruise later this afternoon.

Once the US Coast Guard arrived the Carnival Freedom continued sailing back to port and arrived on Sunday in Fort Lauderdale with no delays. 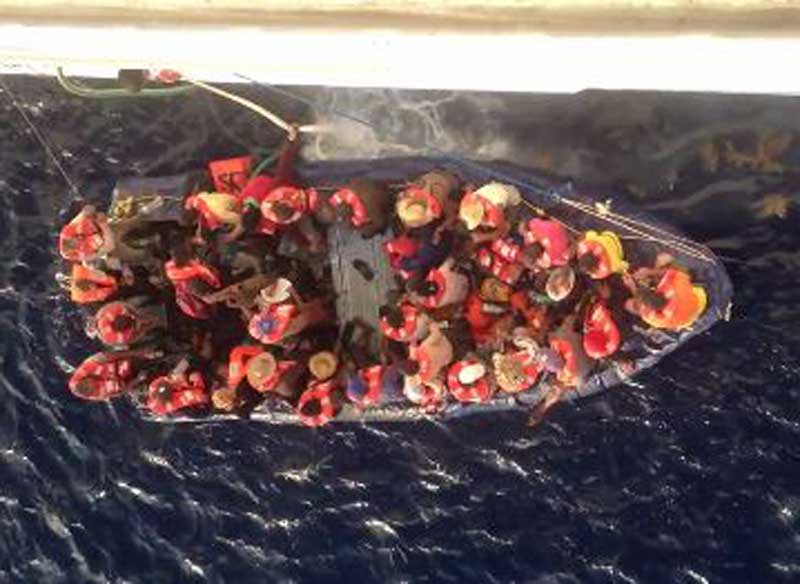