Carnival Dream has been forced to cancel its call in Belize due to Tropical Storm Nate which is growing in strength.

The Caribbean now must deal with another storm which is growing and expected to become a category 1 Hurricane on Sunday. Carnival Cruise Line has been heavily impacted by Hurricanes Irma and Maria and now the Miami-based cruise line has at least one cruise ship impacted by Tropical Storm Nate.

A letter was sent out to guests on the current 7-night Western Caribbean cruise. In the letter from the captain, it mentions that due to Tropical Storm Nate the ship will have to cancel its scheduled call in Belize on Thursday, October 5. When cruise ships call at Belize they must tender guest to shore and with the bad weather conditions, this would not be safe. 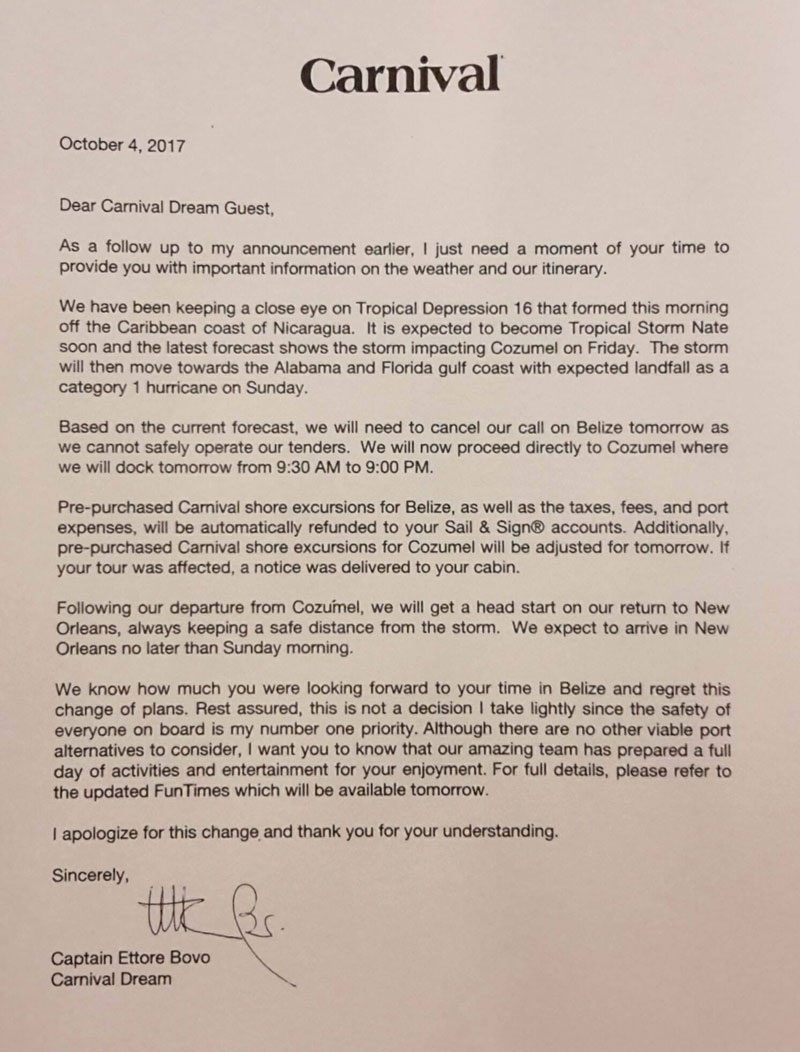 Carnival Dream will instead sail directly to Cozumel, Mexico with an arrival time of 9:30 AM on Thursday, September 5 and a departure at 9:00 PM. The ship will stay ahead of Tropical Storm Nate and dock back in its homeport of New Orleans no later than Sunday morning, September 8.

The growing storm is currently located on the coast of Nicaragua and has maximum sustained winds of 40 MPH. The storm will move north further across the Western Caribbean and the path shows Nate getting very close to the popular cruise destinations of Belize and Cozumel in the coming days.

Nate will continue to move north and make its way up through the Gulf of Mexico where it will gain strength and become a category 1 Hurricane. Nate will then hit the United States coasts of Louisiana, Mississippi, and Alabama including the homeport of New Orleans.

Cruise Hive will continue to watch the development of Tropical Storm Nate and keep readers updated on anything impacting the cruise industry. More cruise ships could be affected.