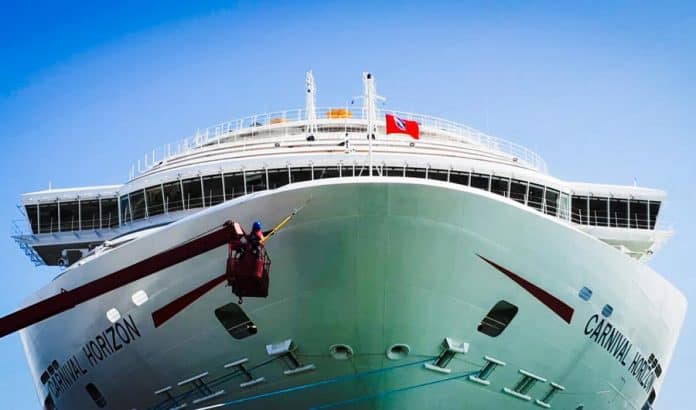 We’re pretty sure you already know about Carnival Horizon hitting the Pier in New York City not long ago. Well, we are glad to tell you the bow of the ship has been fixed up and looking as good as new.

The newest Carnival cruise ship hit Pier 90 in New York during the past week while doing a maneuver for docking. The bow of the ship hit towards the end of the pier causing damage. The ship only had minor damage which didn’t impact the sailing later on in the day. The U.S. Coast Guard was also involved and needed to inspect the ship to give the all-clear for its departure on August 28.

Photos have been posted on social media of some scrapes on the bow. We can also tell you that the mast located on deck 4 forward did need to be fixed.

Since the second Vista-class vessel hit the pier work has been done onboard with workers welding together a new mast and also a new coat of paint to cover up those scratches. You can take a look at some exclusive photos from Cruise Hive showing workers during a recent Port of Call in San Juan painting the bow.

Deck 4 forward had been closed off so that work could be done and great job to the crew for making sure Carnival Horizon is now back to 100 percent.

Attention will now move towards the ship’s debut in Miami, Florida as only a couple of cruise remain out of New York City. The final voyage will be a special 4-night cruise to Bermuda and then on September 17, Carnival Horizon will depart for PortMiami where the newest ship in the fleet will begin with a one time 2-night Bahamas cruise. The 133,500 gross tone ship will begin regular sailing from Miami to the Caribbean on September 22. The ship will be based from Miami all year round.

Also just to let readers know that Carnival Cruise Line recently launched the Carnival Airship which will make its way across the U.S. southeast. The Airship will finally be in Miami between September 16 and 20. More details about this are right here.