A passenger cruising on the Carnival Fascination jumped overboard intentionally while at sea.

Video footage has started to circulate online of a passenger who jumped off the Carnival Fascination cruise ship while at sea. The ship also had a scheduled call in San Juan, Puerto Rico on Sunday, May 19, 2019. To the surprise of his fellow guests, he was swimming in the water and shouting out. The man was apparently 19 years old.

There have been multiple conflicting reports as to why he jumped overboard and we will provide more details on this if we can. You can read one of them here.

It’s also not known the time this occurred or the exact location of the incident. We do know the crew of the Carnival cruise ship activated a rescue operation and lowered a lifeboat into the water, and 45 minutes later the passenger was brought onboard.

You can view the overboard man and him being rescued in the video posted by Cruceros Puerto Rico:

If the passenger did jump off the Fantasy-class vessel intentionally there is no doubt Carnival Cruise Line will take action. From watching the footage he does seem to be fine with no serious injuries.

The Carnival ship was calling at San Juan as part of 7-day southern Caribbean cruise. Puerto Rico and Barbados act as the vessel’s homeport. The ship is 70,300 gross ton with a guest capacity of over 2,000 at double occupancy.

Also Read: Things to Do in San Juan, Puerto Rico for Cruisers

The young guest is very lucky to be alive and if this was done during bad weather it could have ended very badly for him and even delayed the itinerary.

Unfortunately, this isn’t the first time a guest has intentionally jumped overboard into the water. In January 2019 a man jumped from the railings of his balcony from Royal Caribbean’s Symphony of the Seas while in Nassau. That video went viral and the passenger was permanently banned by Royal Caribbean. You can read the post here. 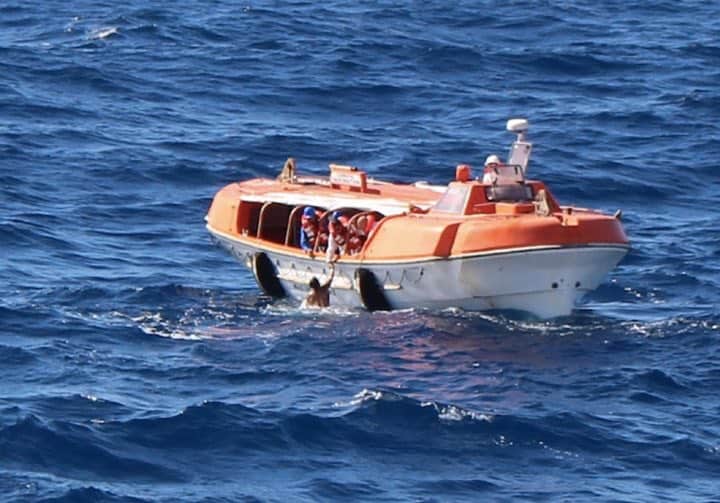