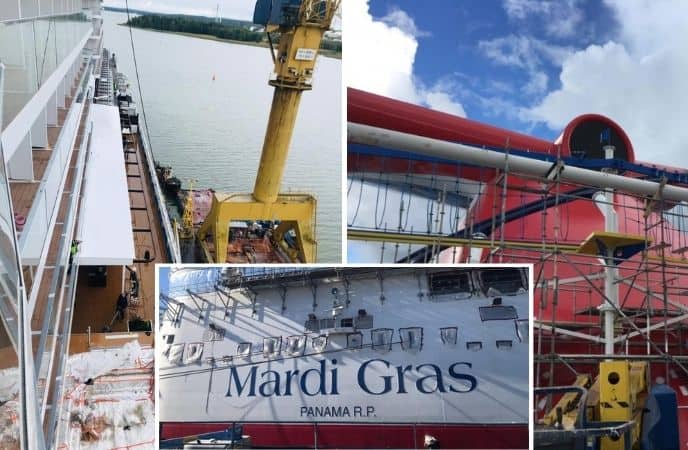 Carnival Cruise Line has released 16 new construction photos from inside the new Mardi Gras cruise ship at the shipyard.

Anticipation continues as the largest Carnival cruise ship in history is under construction at the Meyer Turku shipyard in Finland. Carnival Cruise Line has released the latest batch of photos from inside and some areas on the exterior to Cruise Hive, and we’re happy to bring this first look to all our readers.

With the new cruise ship already floated out on to the water, the outfitting of all the interior spaces is well underway. We can even see some areas that look to be in the final stages of completion such as the kids’ Camp Ocean and Dr. Seuss Bookville spaces located on Deck 4 mid-ship.

Photos that provide this sneak peek into the Mardi Gras include the Havana Bar on Deck 8, Camp Ocean and related spaces on deck 4, the soon-to-be relaxing Cloud 9 Spa that spans deck 5 and 6, and some limited exterior shots.

The ship is coming along nicely even though she has already been delayed twice. Mardi Gras was originally scheduled to debut on August 31, 2020, out of Copenhagen but of course, the current world pandemic crisis cancelled that.

The ship was then set to arrive in November 2020 but that was also cancelled. Mardi Gras will now debut on February 6, 2021, out of the new Carnival cruise terminal at Port Canaveral, Florida.

Videos: Behind the Scenes Look Inside the New Carnival Mardi Gras During Construction

It will be worth the wait and all these busy spaces will soon be shiny and new, ready for guests. Once in service, Mardi Gras will feature the first rollercoaster at sea, named BOLT, along with six themed zones for unique experiences and activities. She’s going to be full of new exciting features and a true evolution from previous classes of ships.

Mardi Gras will be 180,800 gross tons with a guest capacity of 5,282 at double occupancy along with 1,735 international crew members.