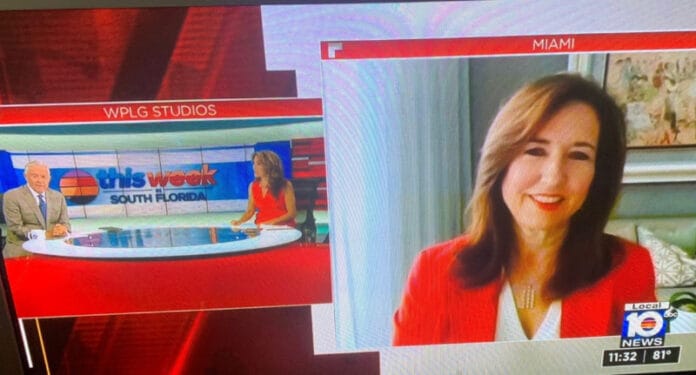 In an interview with South Florida NewsChannel Local 10, Carnival’s President Christine Duffy talked in-depth to the news anchors on the This Week In South Florida show (TWISF). Christine Duffy clarified what is delaying the return of cruises, talks about the CDC’s conditional sail order, what the cruise line’s stand is on the vaccination program, and how it sees the future.

The interview with “America’s Cruise Line” President Christine Duffy comes after broad bipartisan support from elected officials, cruise line executives, and union leaders who all gathered on April 9 at PortMiami.

This also comes days after Florida Governor DeSantis announced the State of Florida is filing a lawsuit against the CDC and its Conditional Sailing Order.

Will We See A July Start From US Ports?

The question that has been on many people’s minds in the last weeks since the cruise industry’s support has grown exponentially is: Will we see a restart in July?. Although there have been positive noises from the CDC, the answer to that question is that the CDC should clarify its stance on its own CSO.

Worth Reading: Cruise Lines Still in Early Stages of Framework, What’s Next?

While Duffy believes that conversations with the Federal Government and the CDC will continue to be ongoing, the Conditional Sailing Order is outdated and based upon the knowledge and science in place in October of last year.

It is not based on the current science and knowledge gained by hundreds of thousands of people cruising worldwide in the last months. Something Christine Duffy is clear in:

“There’s a great deal of information that has not yet been communicated to the cruise lines from what will be required for test cruises. What kind of testing may be required?“

“So we really just don’t have the details or transparency or engagement with the CDC that we need to begin sailing by this summer, which is such an important season for the cruise industry and for vacationers. We respect the CDC and the work that they are doing at a much broader scale, but at the same time, the cruise industry, as far as we know, is the only industry that has not been able to operate for more than a year.“

“And so we’re asking now for the CDC to work with us so that we can have clarity on what will be required to resume sailing from our US home ports.”

Carnival Will Not Make the Vaccine Decision for Guests

Christine Duffy points out that cruise lines should be treated like every other industry in the United States. The President of the largest cruise line in the US does not believe it is up to Carnival to mandate a vaccine onboard.

Related: Which Cruise Lines Have a COVID Vaccine Requirement?

This falls in line with what Governor DeSantis made clear earlier when he said neither proof of vaccination or a vaccination passport should be made mandatory for cruises.

“We are not making those decisions as a cruise line. We do not believe that the cruise industry in the US should be treated any differently than other forms of travel, tourism, or entertainment. And so, at this time, people are able to get on a plane and fly outside of the US, take a cruise and come back into the us without requirements like a vaccine or a health passport. “

“So our position is don’t treat the cruise industry differently than everyone else. We have put together a set of protocols that we believe give prevention and protection, and as I said, we’ve demonstrated in other parts of the world that we’ve been able to sail safely, even before vaccines.”

What measures will be in place remains uncertain as Duffy points out that the CDC has made very little clarity on what the guidelines will be for the cruise lines once the green light is given:

“We will limit our capacity at the point of restart so that we will be able to support any physical distancing requirements that are needed. We’ve not really heard back specifically on what the protocols will be for people when they take a cruise.”

Carnival Could Move its Ships if CDC Remains Silent

Christine Duffy repeated her threat to the CDC that the cruise line might be forced to move at least some of its vessels to foreign homeports if clarity from the CDC does not come soon. Carnival Cruise Line has already extended its suspensions on US operations through June 30, 2021, and is hoping to save what’s left of the summer season.

“I’ve always said Carnival Cruise line is America’s cruise line. We sail from 14 US home ports, a large percentage of our guests drive to their cruise vacation. So we really do not want to have to move our ships out of US home ports. There are several cruise lines that have already begun doing that because at some level we will have no choice if we can’t gain clarity and alignment on what it will take to restart cruising from the US.“

And with this, Christine Duffy points out that the Conditional Sailing Order is entirely pointless with this many cruises sailing nearby.

What doesn’t make sense is that somebody can get on a plane, book a cruise out of the Caribbean for June, fly to that cruise, take the cruise and come right back into the US.

The fight then seems to be far from over. With the CDC dragging its feet over the CSO, despite statements from the agency they expect cruises to resume this summer, time is running short for cruise lines to meet the 90-days they have projected to need to be able to set sail again.

Christine Duffy is therefore appreciative of governor DeSantis’s lawsuit against the CDC, as it will hopefully call for the CDC to move up their timelines or drop the CSO entirely.

“We do have a sense of urgency that we need clarity in order to restart sailing, if we’re going to be able to do so this summer. And so we know that there are other places as well like the state of Alaska, the governor there has also announced that they are looking into a lawsuit because in Alaska, most of the tourists that they get come by cruise ship. This is not limited to Florida, and it is tied to many, many jobs in this community. And so putting the cruise lines aside, I think the focus and the concern that the governor and other representatives who you saw Friday at the port of Miami share, is that we need to get people back to work here. And that’s what we are asking for at this time.”

While the Cruise Lines, trade unions, and elected officials fight for, and talk about the resumption of cruising daily, it remains quiet in the CDC’s camp. The likelihood of cruises leaving from the US this summer is getting smaller each day. Something many wonder about with the high vaccination grades in the US. Many will also wonder what the agenda behind this is.

As the rest of the US economy will likely see a strong recovery in upcoming weeks, the cruise industry, employing hundreds of thousands and worth billions to the US economy, is somehow left behind. The choice for foreign homeports is therefore becoming the smart choice.