Carnival Cruise Line has returned to St. Maarten which is located in the Eastern Caribbean. Cruisers can now enjoy one of the most popular cruise ship destinations in the entire region. Carnival Sunshine was the first in the Carnival fleet to visit the island which marks the return with many more Carnival cruise ships now coming back over the coming weeks.

Carnival Sunshine called in St. Maarten on January 15 and was docked for most of the day. With 3,000 guests onboard the Carnival ship and with the island open back up for cruise tourists there was plenty to do. Passengers were able to enjoy shore excursions, spending time at the stunning beaches and shopping in Philipsburg.

The cruise line posted some breathtaking photos while the ship was docked just across from Philipsburg at the large port which can handle the worlds biggest cruise ships.

Carnival Sunshine is currently on a 13-night Southern Caribbean cruise which also includes calls in two other destinations devastated by Hurricanes in 2017 including St. Thomas and Puerto Rico. Just under a week ago we posted about Carnival Glory being the first Carnival ship returning to St. Thomas, this is a good trend as these once bustling Caribbean cruise ports opens back up for business.

Why Are Cruise Ships Returning to These destinations?

If you’ve been living in a jungle with no internet access for the last year then you may not know that two powerful Hurricanes hit parts of the Caribbean, Bahamas and Florida in September 2017. Hurricane Maria went through first followed by Hurricane Irma, both were devastating and both were category 5 storms.

Some of the smaller islands were completed wiped out and several Caribbean islands which are popular on cruise ship itineraries were impacted in a major way. St. Thomas in the U.S. Virgin Islands, St. Maarten and Grand Turk were just a few of the islands devastated. Puerto Rico is still suffering from power issues and supplies but cruise lines have been helping by donating money and delivering much-needed supplies. Carnival Fascination is currently being charted by FEMA to house Hurricane relief workers, the Fantasy class ship will re-join the fleet in February.

since the Hurricane and thanks to the help from cruise lines, the cruise destinations have been working hard getting service up and running. ow that the clear up is complete and service are able to operate again cruise lines are starting to return. This will be good for the local economies to help re-build even further.

Carnival Sunshine was previously known as Carnival Destiny and has some of the best features in the fleet. we hope everyone who went to St. Maarten enjoyed their time and spent some money! The ship is 102, 800 gross tons and is based out of Port Canaveral, Florida. 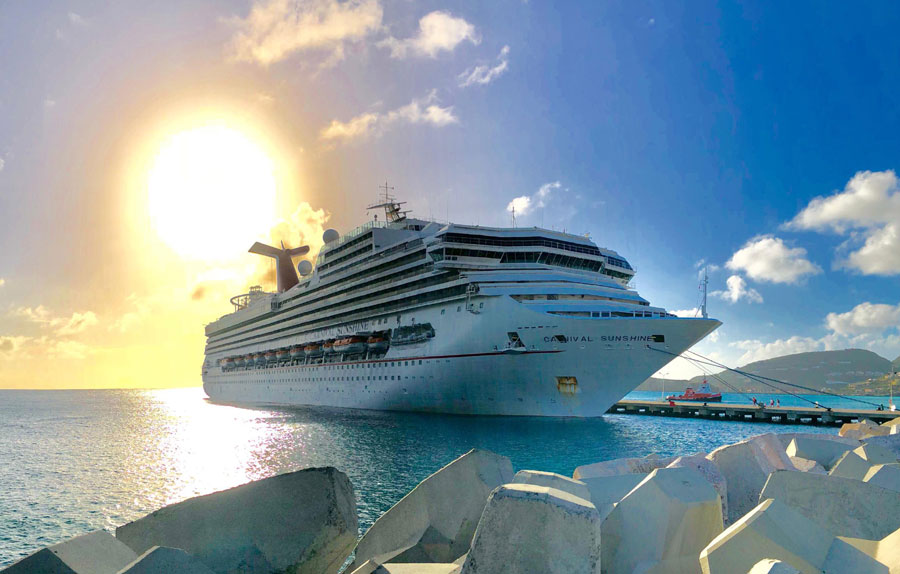