Carnival Cruise Line reveals a new venue for Carnival Celebration that highlights the cruise line's evolution of ships over the past 50 years. 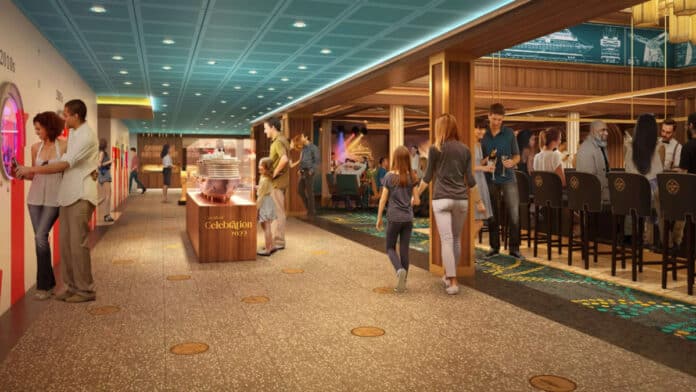 Carnival Cruise Line reveals a new venue that will be featured on the Carnival Celebration cruise ship when she begins sailing towards the end of the year. The Golden Jubilee venue will highlight 50 years of fun with mementos and inspiration from earlier ships in the fleet.

The Golden Jubilee Onboard Carnival Celebration

The first venue of its kind in the Carnival fleet has been revealed for the new Carnival Celebration, which will debut later in the year. The second Excel-class cruise ship will feature The Golden Jubille venue that will take guests back to older Carnival cruise ships.

The new bar and lounge will be located in a yet-to-be-announced themed zone abord the new vessel. The venue will highlight the cruise line’s evolution of ships over the past 50 years. It comes as Carnival Cruise Line is celebrating its 50th birthday through 2022.

“The Golden Jubilee is the ultimate nod to our 50th Birthday – a nostalgic but timeless lounge where our guests can re-live and connect with Carnival’s yesteryears while enjoying a glamorous and elegant space that embraces our current Carnival style,” said Christine Duffy, president of Carnival Cruise Line.

The Golden Jubilee is located on deck 6 in the same location as The Brass Magnolia, which can be found on sister ship Mardi Gras. The space will have memorabilia of older vessels showing how the cruise line has evolved through the different ships.

There will be all kinds of nostalgia at the venue, which guests might notice from older vessels, including those scrapped and long gone. Here are some of the highlights:

Rounded windows will take guests back to those portholes that were so popular on the older Carnival cruise ships. The decor will be similar to those longes and bars from vessels in the past, featuring a stage for live music and a dance floor.

The old Carnival logo from the 70s will be used on the menu, along with popular cocktails that Carnival has offered through the years since its founding in 1972.

Even the adjacent promenade will be inspired by the last 50 years, featuring a first of its kind porthole gallery covering three-dimensional dioramas for each of the five decades Carnival Cruise Line has been operating.

There will also be a 12-foot model of the Carnival Celebration, an original vintage engine telegraph from TSS Carnivale, coins for every ship in the fleet embedded into the floor design, and a model of TSS Carnivale from the now-scrapped MS Inspiration cruise ship.

Carnival Celebration will feature five different themed zones throughout, including 820 Biscayne, Celebration Central, The Ultimate Playground, Summer Landing and Lido. There will be a sixth zone that the cruise line will reveal in the near future as the build-up to Carnival’s newest ship continues.

The mega-ship will debut in Miami, Florida, on November 21, 2022, from the cruise line’s newly updated Terminal F. She will sail five-, six-, seven- and eight-day cruises to the Eastern and Western Caribbean.