British Travel Agent Is Anthem of the Seas Godmother

You’ll be surprised to know that the godmother of Anthem of the Seas isn’t a celebrity! Instead Royal Caribbean have chosen a travel agent from the UK to be Godmother to one of the cruise lines most innovative cruise ships.

The travel agent is 27-year-old Emma Wilby from Sunderland, UK. It’s a welcome change from the usual fanfare of celebrity Godmothers. Ms. Wilby will officially christen Anthem of the Seas and perform a special song for more than 1,300 invited special guests and dignitaries at the ship’s inaugural ceremony in Southampton, U.K., on April 20, 2015. Designed to revolutionize the industry, Anthem of the Seas will sail its inaugural season from Southampton before the ship repositions to its permanent homeport of New York in November.

“We are delighted to welcome Emma Wilby into the Royal Caribbean family as Anthem of the Seas’ Godmother,” said Richard D. Fain, Chairman and CEO of Royal Caribbean Cruises Ltd. “Emma is among many submissions from truly talented travel agents across the U.K. and the judging was very difficult. We thank all travel agents, who we value and are honoring by naming a fellow travel agent as the Godmother of our newest ship.”

In addition to being a travel agent for Thomson, Ms. Wilby is a military wife and budding singer who performs in the Military Wives Choir in Kinloss, Scotland, where she is based with her husband, a Royal Engineer for the British Army. To help her prepare for inaugural day, Craig Yates, Team Captain from British choir group Only Boys Aloud will be Ms. Wilby’s vocal coach, and Royal Caribbean is treating her to a full makeover.

“Emma’s inaugural song will herald in a ship that will be a new anthem for the cruise industry,” said Michael Bayley, president and CEO of Royal Caribbean International. “I am very much looking forward to Emma’s performance and launching Anthem of the Seas with her. I know she will be simply spectacular.”

Anthem of the Seas is the second ship in the Quantum class and will have similar onboard features to sister ship Quantum of the Seas. The ship was built at the Meyer Werft shipyard in papenburg, Germany and is 168,666 gross tons. 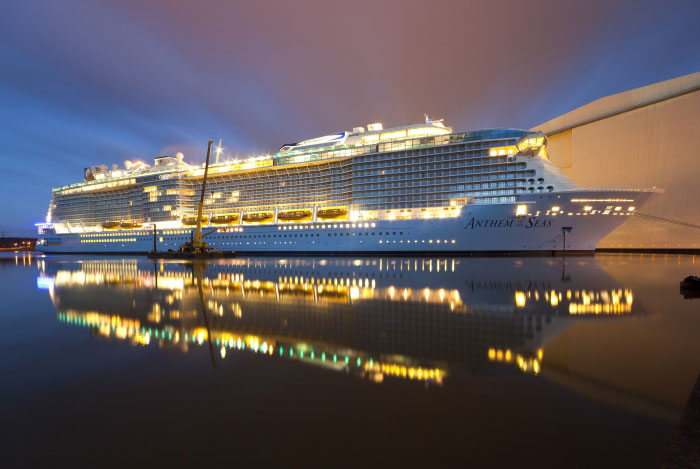