Things are starting to happen across the cruise industry! We've got breaking cruise news from multiple cruise lines as cruising is making a comeback. 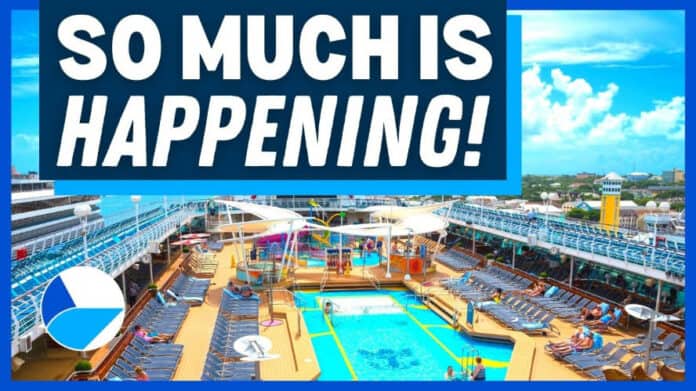 Things are starting to happen across the cruise industry! We’ve got breaking cruise news with cruises starting in the UK, the Bahamas, and even out of St. Maarten along with all the latest headlines from the week.

We’ve got a crazy cruise update for you with major new developments across the industry as cruises start to make a comeback but not in the way you think. Major stories include a further extension from Norwegian Cruise Line, new UK domestic cruises announced from multiple cruise lines, Virgin Voyages requires vaccinations, cruises canceled out of Seattle, Royal Caribbean to begin sailing from the Bahamas, Celebrity Cruises to start sailing from St. Maarten and tons more news.

We start with Norwegian Cruise Line, which has extended its suspension through June 30, 2021. It now means cruise operations won’t start to return until July at the very earliest.

The suspension includes all brands owned by Norwegian Cruise Line Holdings including NCL, Oceania Cruises, and Regent Seven Seas. Guests are being provided compensation options of a future cruise credit that can be used on a future sailing through 2022. This will need to be used within one year of being issued.

For now, the other two major cruise lines of Carnival Cruise Line and Royal Caribbean have only suspended through May 2021.

The much anticipated UK domestic cruises from P&O have been released along with all the essential details cruisers need to know. And yes, all guests will need to be vaccinated before their voyage.

Britannia will sail three and four-night sailings along with one six-night offering starting from June 27, to September 19, 2021. The short cruises will depart out of Southampton, England, and will not include any port visits.

P&O Iona will offer seven-night cruises starting on August 7 to September 18, 2021. Her maiden voyage will depart out of Southampton on August 7 and the ship will offer coastal cruising to Scotland including the Inner Herbrides and the island of Iona!

There will be another seven-night offering which will give guests the chance to enjoy coastal cruising past the Channel Islands and along the coast of France.

Princess Cruises will need to make some further cancellations by extending its pause on operations out of Seattle through June 27, 2021. The extension is due to the Canadian government’s decision to ban cruise ships until early 2022.

The cancellations out of Seattle impacts 7-day Alaska Inside Passage cruises on Emerald Princess and Majestic Princess. Compensation is being offered to all those guests impacted.

And while we’re on the topic of Princess Cruises, the cruise line has detailed new UK seacations. Regal Princess will begin sailing from July 21 through to September 23, 2021. She will sail a total of 14 voyages around the UK including stops in Liverpool, Belfast, and Greenock. The itineraries will range from three to seven nights.

The new Sky Princess will also be in on the action in the UK with a total of eight cruises. She will begin sailing from August 30 through to September 28, 2021. The vessel will also be calling at Liverpool, Belfast, and Greenock on a range of three to seven-night offerings.

The new seacation UK sailings will only be allowed for vaccinated guests and residents of the UK. This is due to the huge success of the vaccine rollout with almost 26,00,000 people who have already received their first dose.

The new cruises will be open for booking from March 24 at 8:00 AM local time.

Holland America Line which is owned by Carnival Corp is also extending its suspension out of Seattle on the U.S. northwest coast. However, cruises will remain on hold slightly longer through all of June 2021 with roundtrip sailings to Alaska.

This includes six cruises on Eurodam and Oosterdam with a call at Victoria, British Columbia, Canada. For now, the July cruises are not canceled but it’s very important to keep checking for updates as this could change.

Just Like Princess Cruises, Holland America is also trying to preserve what’s left of the 2021 Alaska season by working with governments in the United States and Canada. We’ll make sure we keep you informed of any new developments over on the website.

MSC Cruises will become the first cruise line to kickstart operations in the UK and that’s before the country’s own P&O Cruises which is impressive.

So, the cruise line will kickstart cruises from May 20, 2021, just days after the industry can resume sailings in the country. MSC will offer cruises out of the Port of Southampton, starting with a series of short sailings. They will then be followed by week-long cruises that will even offer additional embarkation ports.

Further itinerary specifics are to be revealed shortly including which ships will sail. MSC continues to work with British authorities on the safe return of cruising and is also making sure it can be done safely.

The cruise line will allow vaccinated or non-vaccinated guests the opportunity to enjoy UK cruises. In fact, MSC is hoping entire families can put the pandemic behind them and go on a British Isle cruise this summer.

Virgin Voyages has announced that all of its guests and crew will need to be vaccinated. The cruise line says the decision is based on both the will to provide the safest possible sailing experience for both guests and crew members; and the speed at which the new administration in the US has been rolling out the vaccine.

Current projections in the U.S. mean that from May, there could be a significant easing of measures throughout the United States. For now, Virgin remains on hold with operations suspended through June 2021 for Scarlet Lady.

Royal Caribbean to Homeport in the Bahamas

A major cruise news update was released from Royal Caribbean as the cruise line will begin cruises out of the Bahamas from this June. Cruising is coming back but not from the United States.

Royal Caribbean is back with cruises in the Caribbean starting from June! Adventure of the Seas will be based out of Nassau in the Bahamas, and she will offer 7-night cruises.

Starting from June 5, the Royal Caribbean cruise ship will have two back-to-back days at the cruise line’s private island of Perfect Day at CocoCay, a chance to explore Grand Bahama Island, and a visit to Cozumel, Mexico.

Bookings will be open from March 24, 2021, and the first cruise from the Bahamas will be on June 12. The itineraries will run through August 2021.

There will be huge excitement with Royal Caribbean homeporting in the Bahamas for the first time and returning to service. However, the new offerings will only be available to vaccinated adults. Those under the age of 18 will need to have a negative test.

All crew members will also be vaccinated, offering a fully protected cruise experience with health measures in place.

Worth Reading: The Cruise Industry Is Looking Elsewhere

Celebrity Cruises has announced its comeback and it’s not out of the United States. After more than a year of suspended operations, the cruise line will begin cruises in the Caribbean this June.

So the Celebrity Millennium will begin sailings from her new homeport of St. Maarten on June 5, 2021. She will offer seven-night itineraries departing through August.

The sailings will be open for booking from March 25, 2021. Adults will need to be vaccinated before being allowed to cruise, but those under the age of 18 will also be able to sail as long as they have a negative test result within 72 hours before embarkation.

We can’t fit every news story in but there are loads more from the week which are really worth your attention including record bookings for new cruises in the Bahamas, Miami-Dade mayor requests a meeting with the CDC Director, new MSC Cruise ship boasts the largest MSC Yacht Club in the fleet, sixth Royal-class cruise ship floats out at the shipyard, Royal Caribbean to return to LA in 2022, more than 100,000 passengers have cruised out of Singapore since December, new details revealed for the Allura class vessel and loads more.

You can also catchup on last week’s breaking cruise news.