We do know something about the image above, someone is going to have to spend a lot of time cleaning all that mud off! It’s not often we get to see a nice shiny new cruise ship partly covered in mud, we just had to show this to all of you.

According to a local site in Germany, a fire extinguisher line was routinely cleaned onboard the Norwegian Joy while in the final stages of fitting out at the Meyer Werft shipyard in Papenburg. While the line was being flushed a lot of muddy slushy water poured over the vessel. Nothing serious but we don’t think NCL will be posting this view online.


The Norwegian Joy should all be shiny once again before making its conveyance along the Ems River towards the North Sea towards the end of the month. The Breakaway-Plus class vessel which is purpose built for the Chinese market will soon commence Sea Trials before finally being delivered to Norwegian Cruise Line in April.

It hasn’t been completely smooth sailing for the ship during its construction phase. The shipyard had to deal with two separate fires on the ship which we previously posted about. The vessel is 168,800 gross tons and can carry 3,900 guests. The ship will be based in China once in service and recently was floated out of the construction hall for the very first time. 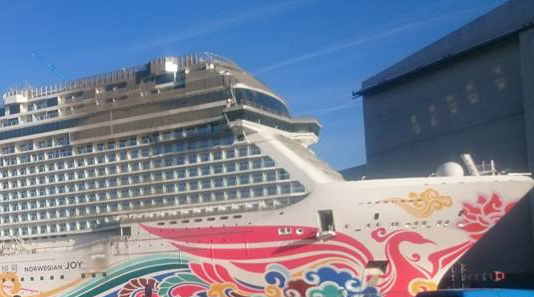