Find out more about the Celebrity Silhouette cruise ship which is operated by Celebrity Cruises. Things to do onboard and features.

Over her life, Celebrity Silhouette has sailed around the world, including an array of Mediterranean and Caribbean itineraries. Future itineraries for Northern Europe and South America are planned.

If you’re anticipating taking a cruise on the Celebrity cruise ship later in 2020 or 2021, and taking advantage of both new and upcoming itineraries and the new refurbishments, what can you expect? What do you need to know about this luxurious ship?

For starters, here are our 11 best things to love and know about the Celebrity Silhouette cruise ship.

The Celebrity Revolution initiative is a $500 million effort on the part of the cruise line to transform and update all of its older ships, and Celebrity Silhouette’s dry dock period, which wrapped up in February, is the latest step in that effort. When a ship undergoes its Celebrity Revolution transformation, it receives redesigned accommodations and new suite experiences, upgraded restaurants and other venues and more, all imagined by Celebrity Cruises’ team of 500 A-list architects, designers and engineers.

2. New venues are sure to appeal to luxury travelers who want to experience something new at sea

One of the coolest new venues aboard Celebrity Silhouette, thanks to the Celebrity Revolution initiative, is The Retreat, a space for suite guests only.

The Retreat first premiered aboard Celebrity Edge, and now it’s a venue that’s being rolled out to the entire fleet. The Retreat is made up of the Retreat Sundeck and the Retreat Lounge. The sundeck is a luxurious outdoor area that mimics what you might find at a five-star resort. It’s filled with plenty of plush seating, sun loungers and spots to soak in some rays while enjoying effortless service, cocktails and treats. There’s even a hot tub.

The Retreat Lounge is an indoor space that continues the upscale, hotel-like design, with 24/7 service and complimentary beverages and bites. There’s also a concierge desk in the lounge, to help you with any of your cruising needs.

A separate restaurant at the Retreat is called Luminae and is also open to suite guests only. It offers all-day dining with a menu crafted by a Michelin-starred chef, as well as an elegant atmosphere.

4. Dining and venue enhancements extend to areas open to all guests

If you think the new and upgraded venues aboard Celebrity Silhouette are only open to suite guests, think again. The cruise line made some changes to venues open to all cruisers.

The newly upgraded Oceanview Cafe has a more open design and increased seating. The new Main Restaurant also has more seating, for more guests dining at once. The redesigned Sunset Bar provides better seating with great views and a similarly redesigned Rendezvous Lounge offers a bigger bar and more space to spread out.

5. Even the activities aboard Celebrity Silhouette received an upgrade

The Celebrity Revolution upgrades don’t end there. Various little improvements have been added to the ship’s activities and amenities as well.

For example, advanced and pervasive Xcelerate WiFi is now available on the ship. The spa rooms get new upgrades, as do the shopping boutiques. New salon services are available, such as blow outs and manicures and pedicures. The art and photo galleries receive enhancements and the new casino design features new slot machines, for what Celebrity promises will be one of the best gaming experiences at sea.

6. The Solstice-class features you love are still there

Even after this update, though, the Solstice-class features that frequent Celebrity Cruisers travelers know and love can still be found aboard Celebrity Silhouette.

For example, one of the most beloved spaces aboard each Solstice-class ship is the Lawn Club, which you can find situated on Celebrity Silhouette’s Deck 15. The Lawn Club is made up of real grass and is an open-air space where you can find not only plenty of spaces to sit and enjoy the sun (and possibly even rent your own private cabana), but also the Lawn Club Grill, an open-air restaurant that features cooking classes. The Porch is another lunch and dinner restaurant, with a deck-like feel. A movie screen and games round out the fun space.

7. It’s pretty cut and dry in regards to what is and isn’t included in your cruise fare

If you’re a newer cruiser, then you might be a little bit confused by your cruise fare when you’re shopping around. What’s included? What can you expect? Are you really going to have a great time when you’re traveling aboard a certain cruise ship if you don’t purchase any of the add-ons that are available?

Celebrity Silhouette makes it easy when you’re cruise shopping to know what you’ll get with your basic cruise fare and where you might want to upgrade. Your stateroom pricing comes with dining at the main dining rooms, buffet and a very few other restaurants; daily cruise activities; use of the gym, but not most classes; use of the table tennis activities; and access to all the theater shows and the comedy club.

What you won’t get with your cruise fare is gratuities; beverage and spa tips (charged only when you’re on the ship, automatically, 15 percent of your bill); all drinks beyond water, tea, coffee and juice; spa treatments; shore excursions; WiFi; and any extra activities or purchases made aboard the ship.

8. The specialty dining is outstanding aboard Celebrity Silhouette

Don’t get us wrong. The dining options that are included in your Celebrity Silhouette cruise fare are totally delicious and more than enough to get you through a cruise without boring you. Celebrity Cruises knows how to do food. However, if you’re in the mood to splurge, you also won’t be sorry if you pay for the specialty dining. It’s worth the fee.

Specialty dining aboard Celebrity Silhouette includes Qsine, an animated dinner experience that’s just that — more experience than dinner; Tuscan Grill, an Italian steakhouse with fantastic views of the water; Murano, a luxurious French restaurant serving traditional French fare; Sushi on 5, an a la carte sushi eatery also serving traditional Japanese eats; Cafe al Bacio, a specialty coffee shop; and The Porch and The Lawn Club Grill, both on the Lawn and with casual dining like what you might find at a seaside resort.

9. You’ll never be bored — Celebrity Silhouette is filled with fun

You’ll find plenty of entertainment and activities to enjoy aboard Celebrity Silhouette. The theater on Decks 4 and 5 offers a mix of musicals and comedy, with an impressive level of production and talent. Daily programming ranges from classes to demos, seminars to art auctions, games to game shows. Most daily activities are free, but some do come with a fee. At night, the entertainment becomes a little more adult-friendly, with karaoke, dancing, gambling and more at the ship’s various watering holes.

10. It’s always easy to find a drink when you’re aboard Celebrity Silhouette

Speaking of watering holes, you won’t find a lack of them aboard this ship. There’s a wide swathe of bars and lounges open every evening, so you can find somewhere to wet your whistle, no matter what kind of bar and lounge experience you like.

There’s the Passport Bar, open until late every evening, and opening in the morning at 9 a.m., so you can get a drink almost any time. Craft Social is the newest watering hole, added with the February remodels and replacing Cellar Masters; it’s an upscale sports bar, with lots of beer, upgraded bar food and high-end furnishings.

The Martini Bar is a favorite spot overlooking the atrium. Quasar is a retro night club, while Entertainment Court Bar, another new spot, is adjacent, offering cocktails. World Class Bar is all about mixology. The Retreat Lounge, also new and just for suite guests, took over the spot where Michael’s Club once was.

And this all just scratches the surface! There’s still a handful of other bars and lounges left to explore.

11. Soaking in some sunshine is totally easy aboard Celebrity Silhouette

You already know about the Retreat and the Lawn Club, both of which come with spots to lounge about in the sun, but the sunny spots don’t stop there.

The ship offers a primary pool area midship, along with a family pool, sports pool and wet zone. These pools also come with four hot tubs. Loungers and other seating are plentiful, and bars and grills are just steps away, in case you want a quick bite or a refreshing drink.

An adults-only Solarium is nearby, also a great spot for catching some rays, with its own pool, two hot tubs, loungers, a fountain and a cafe for light bites.

Has the Celebrity Silhouette been refurbished?

The Celebrity Silhouette cruise ship is the most recent Celebrity Cruises ship to receive the Celebrity Revolution renovation, wrapping up renovations in February 2020.

When a ship undergoes its Celebrity Revolution transformation, it receives redesigned accommodations and new suite experiences, upgraded restaurant and other venues and more.

How old is the Celebrity Silhouette?

Celebrity Silhouette debuted in 2011, making it just nine years old. However, while the ship is relatively new, it still received some extensive renovations in early 2020, thanks to Celebrity Cruises’ Celebrity Revolution initiative to upgrade all of its vessels.

What class cruise ship is the Celebrity Silhouette?

How many pools are on Celebrity Silhouette?

There are fours swimming pools on Celebrity Silhouette, along with six jacuzzies. There’s a primary pool area midship, along with a family pool, sports pool and wet zone. These pools also come with four hot tubs. An adults-only Solarium is nearby, also a great spot for catching some rays, with its own separate pool, two hot tubs, loungers, a fountain and a cafe for light bites. 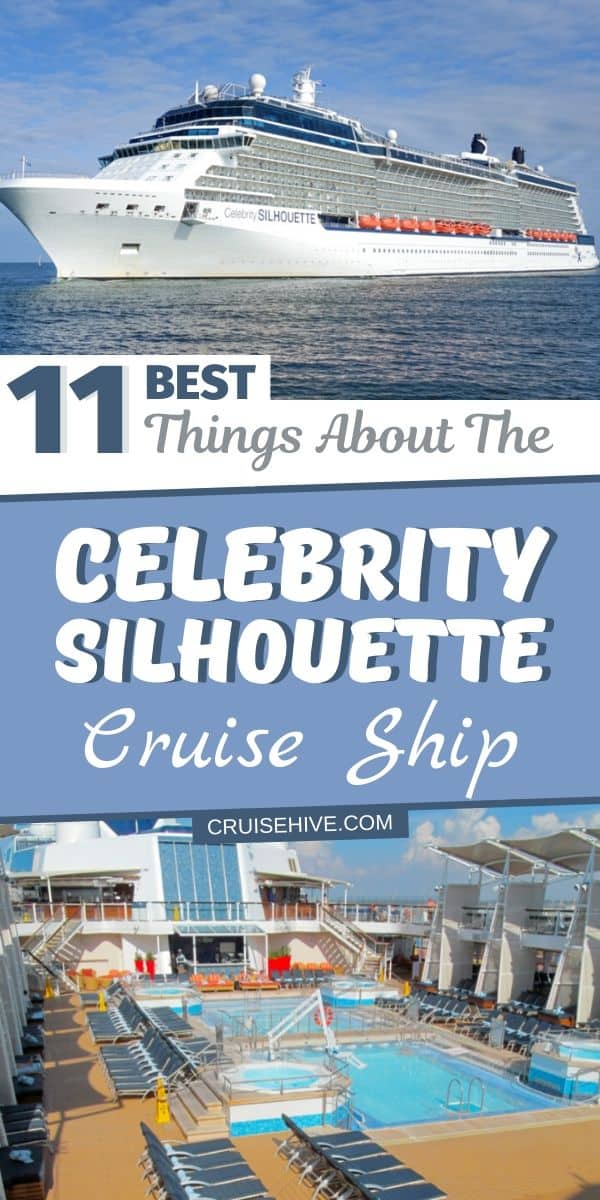