Behind the Scenes Look Inside Mardi Gras During Construction

Carnival Cruise Line has released a first behind the scenes look at Mardi Gras while the ship is under construction in Finland.

The largest-ever Carnival cruise ship is currently under construction at the Meyer Turku shipyard in Finland. Carnival Cruise Line has released some behind the scenes footage during her construction as the creative interior spaces come to life.

The footage we look at is the Cuban-themed Havana Bar that is located on Deck 8 mid-ship and open from 9:00 AM to late. The venue is similar to the current Havana space found on the Vista-class class vessels. The venue is a place to unwind with custom cocktails and Latin music.

The home of kids during a Carnival cruise! This fun-filled space in the mid-ship is starting to look alive with colorful décor and it’s adjacent to the Dr. Seuss Bookville, part of the exclusive partnership with Dr. Seuss Enterprises. Camp Ocean is for kids ages 2-11 and there is also a Night Owls service for babysitting the younger ones.

The lounge will be full of live music and a range of entertainment offerings once the ship begins sailing in 2021. As you can see, workers are busy completing the venue which will be stunning and a must-visit during any Mardi Gras cruise. Located in the mid-ship on deck 7 there will be a dance floor, live music, karaoke, late-night shows, talks, and seminars.

The Cloud 9 Spa is going to be a popular venue on the new cruise ship. It features a huge gym and is located on deck 5 and 6 forward.

Mardi Gras is the first of the new Excel-class ships powered by Liquefied Natural Gas (LNG). She’s in the final stages of construction where the main focus is outfitting all the interior spaces. The ship has already floated out on to the water.

At 180,800 gross tons, she will be the largest in the fleet taking Carnival into a new era of ship design. She’ll have a guest capacity of 5,282 at double occupancy, along with 1,735 crew members.

The ship will feature the first rollercoaster at sea called BOLT along with six themed zones, 2,600 staterooms, and exclusive restaurants from Emeril Lagasse, Guy Fieri, Rudi Sodamin, and Shaquille O’Neal.

Mardi Gras will debut out of the new Carnival terminal at Port Canaveral on February 6, 2021, after a long delay. The mega cruise ship will sail the Eastern and Western Caribbean year-round.

All Images and Footage Via: Carnival Cruise Line 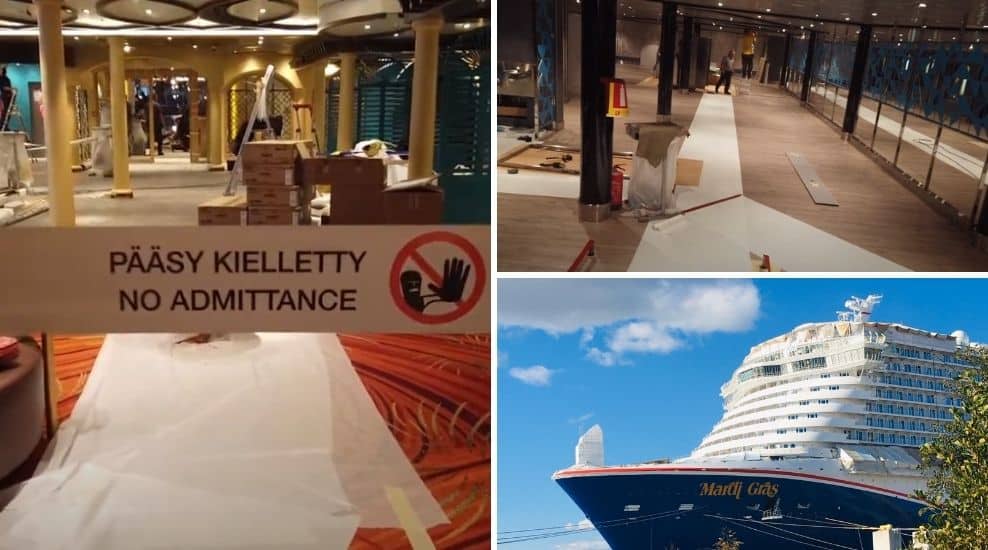