Bed Bugs On A Cruise Ship! Everything Will Be Alright

A passenger from the Norwegian Getaway has given us a nice insight into bedbugs on a cruise ship! The man came across a bed bug in room 9830 and is pretty angry about how the cruise line has handled it.

When the Norwegian Getaway arrived back at its home port in Miami, Florida on May 8 one guest came across a bed bug. He managed to keep the bug in a plastic seal for us all to see. He contacted the guest services and waited for the pest control to arrive.

Watch the first video when the bug was first found:

The passenger known as Suburban Detroit on YouTube posted “They wouldn’t even admit it was a bedbug even though they inspected my room. How do you inspect for bedbugs if you don’t know what they look like?” Not much could be done at the time as the ship was preparing for the next voyage and his luggage had already been taken away. There is a possibility more bugs could be in his luggage, often luggage can be kept in cruise terminals where bugs including cockroaches can find their way in.

Because he was disembarking the Norwegian Getaway, guest services told him to follow-up with them after he got home. He posted “the inspector on the ship, Devon Bedward, said I would get a determination on identifying the insect by calling Guest Services as soon as I got home. I got home Sunday, called Tuesday and guest services said they would not even get that info for a week at the earliest.”

Staff inspects the stateroom for bugs:

The man’s luggage from the ship is in garbage bags in his garage days after the cruise. he finally posted “so here I sit, 5 days after the cruise, my family has bites on them and NCL doesn’t even know if it’s a bed bug—allegedly doesn’t know. They offered us medical attention—at our own expense!”

Cruise ships are often based in hot tropical climates where many types of bugs thrive. Cockroaches can be an issue onboard and most cruise lines will carry special chemicals to kill them. There are many ways they can get onboard but one of the most popular ways are in the luggage or bags when going on and off the ship. 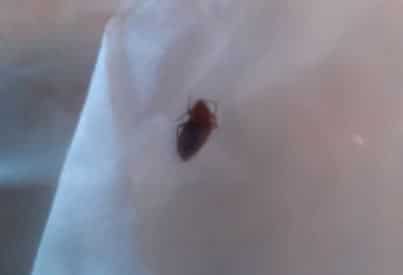