Anthem of the Seas Almost Ready For Float Out

Royal Caribbeans next cruise ship which is still under construction and is getting closer to entering service.

The cruise line has released new photos of the 168,700 gross ton cruise ship being put together block by block at the Meyer Weft shipyard in Papenburg, Germany. The ship will be the sister ship to Quantum of the Seas and exactly the same class.

Take a look at the photos below by released by Royal Caribbean:

Anthem of the Seas will join Quantum of the Seas as one of the most technology driven vessels in the industry but first some major milestones will have to be met. The ship will be floated out of its construction building at around 7 am local time on February 21st. The ship will continue being constructed which includes sea trials and interior spaces.

In addition Royal Caribbean have announced that Anthem of the Seas 1,300 capacity Royal Theatre will bring world-class shows to its guests. The theater will feature “We Will Rock” which was already announced back in 2014 and is based around that well-known band called Queen! A brand new production show written for Anthem of the Seas is called “The Gift” which is a musical journey of fantasy and illusion. The “Spectra’s Cabaret” production show will be held in the ships Two70 lounge which is known for innovative projections and lightnings.

Anthem of the Seas will sail out of Southampton, UK once it enters service in April 2015. The large ship go head to head with Britain’s purpose-built cruise ship the P&O Britannia so it will be an interesting time for the UK market as well as Europe. 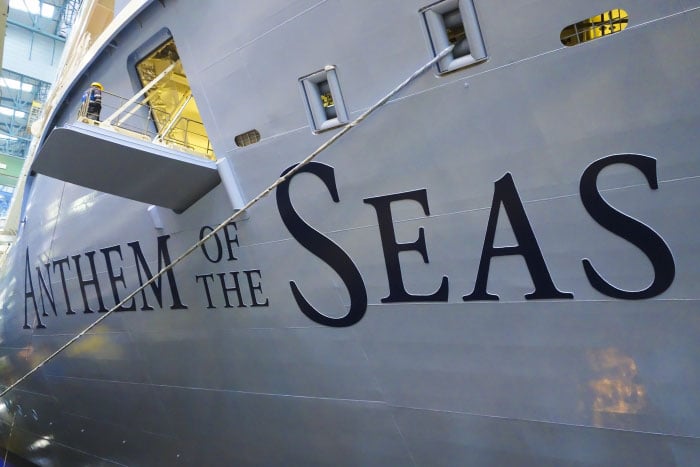