Aidaprima Gets Her Lips At Japanese Shipyard

German based Aida Cruises upcoming cruise ship Aidaprima has got her lips while under construction at a Japanese shipyard.

The lips were added at the Mitsubishi shipyard in Nagasaki Japan where the new class cruise ship is currently in its final phase of construction. The vessel has already received its famous eyes and now with the lips it completes a look which is well-known throughout the cruise industry. The hull artwork which can also be seen on all ships in the fleet are by Rostock artist Feliks Büttner. The artwork was a challenge for the German artists due to the Aidaprima’s straight bow.

Aida Cruises states that “the new hull design of Aida Prima leads to a significant increase in energy efficiency. The position lights and anchor hatch in the bow section had to be observed for color reduction, so that the painting can develop its known three-dimensional effect”

The kiss mouth of Aida Prima will shine after its completion on a total area of 150 m². Each eye on the starboard and port side covers an area of 212 sqm each and blue waves on both sides of the hull fill an area of 330 m². The entire painting extends over a length of 261 m, surpassing all previous ship paintings in the AIDA fleet. A total of 342 liters of paint in eleven different colors are used.

Aida Prima launches its maiden voyage on October 1 from Yokohama, Japan. The vessel will also homeport in Hamburg, Germany from April 30th 2016. The Aidaprima is the largest cruise ship ever built for Aida Cruises at 124,500 gross tons. This will be a new generation vessel using new methods of construction and a sister vessel has already been ordered. 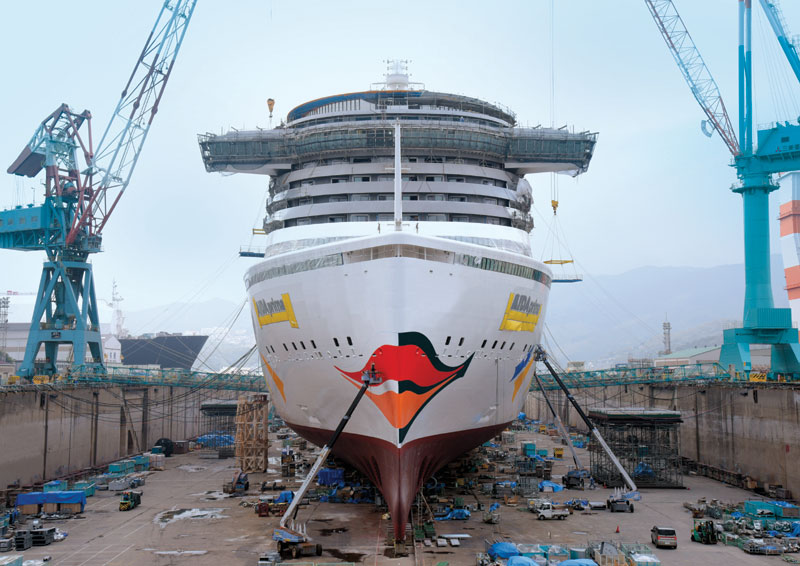