Norwegian Escape which is one of the world’s largest cruise ships has finally been delivered to Norwegian Cruise Line. After 17 months of construction the time has come for the large vessel to begin offering cruises and delight cruisers from all over.

Today the 164,600 gross ton cruise ship was delivered to NCL from the German based shipbuilder Meyer Werft. The ceremony took place in Bremerhaven, Germany with cruise line and shipyard executives.

“Norwegian Escape’s arrival marks a true evolution for our brand—we’ve capitalized on the best of our Breakaway Class ships and taken freedom and flexibility to the next level with this incredible new ship, Once again, the team at MEYER WERFT, along with our new build and operations teams, and all of the ship’s officers and crew have done a remarkable job and we cannot wait to welcome guests on board this spectacular new vessel.”

The ship will sail off to its first official port of call of Hamburg, Germany under the control of Norwegian Cruise Line. Norwegian Escape will then set off for Southampton, UK with a two-night stop over. Finally on October 29 the new ship will sail a transatlantic crossing to Miami, Florida where it will sail year round.

“We are thrilled to deliver the first in Norwegian Cruise Line’s Breakaway Plus class, Norwegian Escape is the newest and most advanced cruise vessel on the seas and we are proud of the team that worked diligently to design and build her.”

Norwegian Escape which is the cruise lines largest ever ship will be christened in Miami on November 9 by international superstar and singer Pitbull. Pitbull will also be the ship’s Godfather.

Highlights onboard include an Aqua Park, the largest at sea and includes a new tandem Aqua Racer slide, Broadway musicals, Haven which is a private enclave on the top of the ship and a ton more. 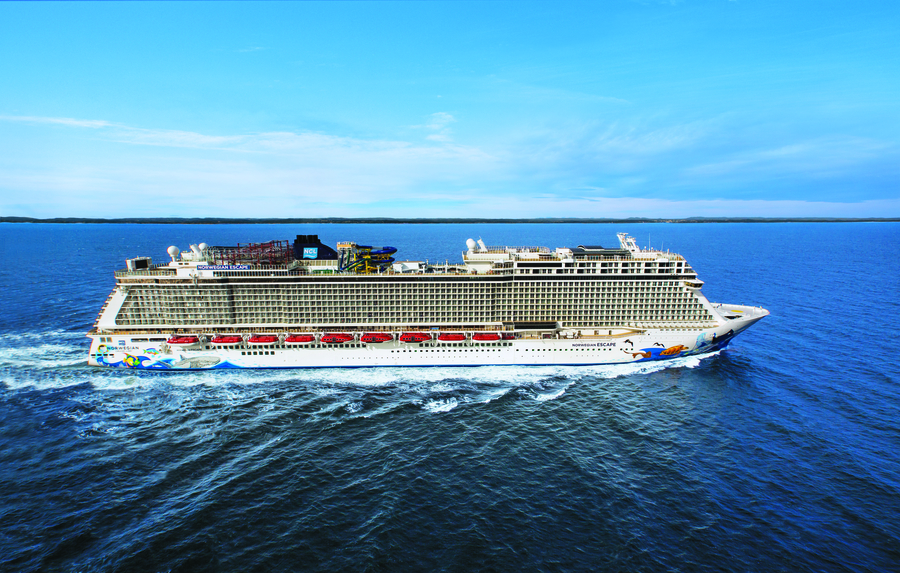