A Look at the History of Azamara Cruise Ships

A few weeks ago, former MV Adonia arrived in Belfast for an extensive refit. She is going to begin sail with the Azamara Club Cruises’ fleet in Summer 2018.

So now we are wondering whether there is any information about the new ship of Azamara that will have the name of Azamara Pursuit. Also, we have decided to refresh our memories on the history of well-known Azamara Journey and Azamara Quest.

To begin with, Azamara Pursuit is the youngest ship of the former R-class of ships. Azamara Journey and Azamara Quest are also ships of this class. Therefore, we can say that three youngest sisters of this class will gather under the flag of Azamara starting March 2018.

History of Each Ship

We offer you to start with “the oldest sister in the fleet,” Azamara Journey. It turns out that the Azamara Journey was originally called R Six. Respectively, she was the 6th representative of her “family.”

Let’s dig deeper into the history. R-class consisted of eight cruise liners built in 1998-2001 at the well-known shipyard in Saint-Nazaire, France for Renaissance Cruises. In 2001, the company declared bankruptcy.

R Six was launched in 1999 and put into operation in 2000. In 2001, Cruise Company Invest bought the liner. In fact, she began to operate sailings only in 2003 after joining Pullmantur Cruises. She was renamed Blue Star. In 2005, she became officially known as Blue Dream.

Azamara Quest Had a Similar Story

By the way, the Azamara Quest’s first name was R Seven. The ship was launched in 2000. In 2003, R Seven became a part of the fleet of the German company called Delphin Seereisen. Delphin Renaissance was the new name of the ship.

In 2006, Delphin Renaissance joined her sister and became a part of the Pullmantur Cruises fleet. The ship got the name of Blue Moon.

In fact, the fate has united ships since that year. In late 2006, there were rumors that Blue Dream and Blue Moon would be transferred from Pullmantur Cruises to the fleet of Celebrity Cruises. This issue was discussed very seriously, and even the names were already chosen: Celebrity Journey and Celebrity Quest.

However, the story was different. It was decided to create a new company, which pleases us today. The company’s name is Azamara Cruises. In 2007, both ships entered the Azamara Club Cruises’ fleet.

An interesting fact: to “repair a loss,” the former ship of Celebrity Cruises, Zenith, joined Pullmantur Cruises in 2007.

For the past ten years, an incredible tandem of Azamara Journey and Azamara Quest has pleased the cruise lovers.

It’s time to learn the history of the 3rd sister that will join the fleet soon. R Eight was launched in 2001. She became the last R-class ship.

In fact, the ship took her first cruise in 2003 under the new name of Minerva II being a part of the Swan Hellenic’s fleet.

In the spring of 2007, the ship joined the Princess Cruise Line’s fleet. The new name of the ship was Royal Princess.

In May 2011, Royal Princess joined the fleet of P&O Cruises. The ship was renamed Adonia. Adonia operated cruises under the flag of P&O until 2015. In June 2015, it became known that the ship would become the flagship of the new cruise line, Fathom, from the beginning of 2016.

The ship made a short stay in Fathom. Adonia returned to P&O Cruises in June 2017. In early 2018 it was announced that she’ll join her new family in Spring-Summer 2018. Her last sailing under the P&O Cruises’ flag started in Barbados on February 23, 2018.

It was the history of Azamara Pursuit. We can’t wait to see this beauty in the Azamara’s livery. 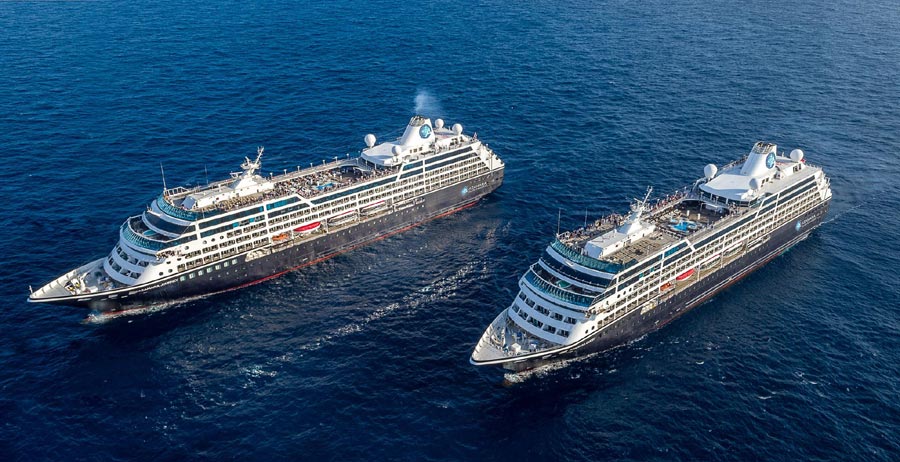