Just like in 2019, in 2020, we can expect eight new mega cruise ships to enter service. These ships are some of the biggest and the best. After all — they are mega.

What exactly is a “mega” cruise ship? Well, it all depends on who you ask. Some rank mega cruise ships as those that are able to accommodate more than 5,000 passengers at one time. Others say it’s a cruise ship that can handle 2,200 passengers or more.

Regardless of the overall passenger capacity, though, all mega cruise ships have one thing in common. They’re built to take hordes of travelers across the oceans and keep them wildly satisfied with their travel experience — providing endless arrays of entertainment options, dining options, drinking options and more for every type of traveler out there, including couples, moms, dads, kids, grandparents, even businesspeople. Whoever you are, whatever kind of traveler you are, you can find something for you on one of these massive ships.

So, want to check out the latest in mega cruise ships? Then just take a look at these new, largest cruise ships arriving in 2020. Who knows — You might find yourself booking a cruise on one or more of them in the very near future.

Celebrity Apex is set to make its debut in April 2020, sporting a 129,500 tonnage, length of just over 1,000 feet and double occupancy of 2,910 passengers. This makes it one of the smaller ships on our list of mega cruise ships, but that certainly is no deterrent.

One of the Celebrity Edge series’s distinctions is that the ships in the series have an outward-facing design. Part of this outward-facing design is the Magic Carpet, the world’s first cantilevered, floating platform that takes travelers 13 stories above sea level, for experiences out over the open ocean, including entertainment and drinking.

There’s also the new venue Eden, a lounge-style setting with outdoor and indoor seating, 12,000 square feet of space, three-story windows and a unique way to watch the waves float by, as well as the Rooftop Garden, a “living playground” with access to dining.

Of course, Celebrity Apex will also offer all of the Celebrity Edge series’ best entertainment venues, bars, lounges and restaurants as well.

Celebrity Apex will initially sail from Southampton, serving travelers in the Mediterranean, before moving on to Fort Lauderdale, Florida, and Caribbean itineraries in November 2020.

Construction on MS Iona (named after the Scottish island with the same name) started in the spring of 2018 and it’s set to begin service under P&O Cruises in May 2020. The ship, at 183,900 gross tonnage, is the largest ever among all P&O Cruises ships, as well as the largest ever slated to serve the British market. The $950 million ship can fit 5,200 passengers over 18 decks.

Iona is currently under construction in Germany and is one of two identical ships planned for P&O Cruises; Iona’s sister ship is planned to enter service in 2022. In addition to setting records for size, Iona is also the first British market cruise ship powered by liquified natural gas, a choice that P&O hopes will make the ship more eco-friendly and “green” versus other mega cruise ships that are powered by diesel.

Some of Iona’s highlights include a three-deck atrium, 17 restaurants (including eight specialty restaurants), 12 bars, 16 whirlpools, four swimming pools, a half-mile promenade deck and the SkyDome. The SkyDome is a glass-encased entertainment venue.

When Iona wraps up construction early next year, she’ll head from Southampton to Norway, where she’ll travel the fjords.

Enchanted Princess from Princess Cruises is scheduled to set sail in Europe in 2020. The ship is the fifth Princess Royal-class vessel, with room for 3,660 guests and 1,346 crew members.

You can expect all your favorite Royal-class amenities and venues, but with a few new surprises. There are unique dining experiences that you won’t find elsewhere, for example. Enchanted Princess also boasts the most pools and whirlpool hot tubs of any other Princess cruise ship.

To top it all off, VIP luxury travelers can book the new Sky Suite, which boasts some of the best luxury at sea, including the largest balcony at sea, at 1,000 square feet of space. Sky Suites hold up to five travelers, with ample spaces that’ll make you think you’re in your very own private luxury apartment, though the 270-degree views will easily remind you that you’re on a cruise.

Carnival’s new Mardi Gras cruise ship is definitely a mega cruise ship if we’ve ever seen one. This ship, the first of Carnival’s XL class, can handle a passenger capacity of 5,282 guests with its 344-meter length and 180,000 gross tonnage.

Currently under construction in Finland (construction began in November 2018), the ship is expected to welcome passengers in May 2020. Similar to P&O’s Iona, Mardi Gras will be the first ship powered by liquefied natural gas in North America.

Mardi Gras will make her home at Port Canaveral’s new cruising terminal, where she will eventually be joined by Carnival’s second XL-class cruise ship in 2022.

Plans for Mardi Gras include 20 decks, with 11 decks reserved for accommodations. New restaurants are planned for this ship, never before seen on a Carnival vessel, including La Piazza.

A new entertainment option is a sea roller coaster, BOLT. BOLT is by far the most innovative aspect of this ship, as it’s the first-ever roller coaster at sea, an all-electric coaster that can serve up to 190 cruisers in one hour, with thrilling twists and turns, climbs and drops, 57 meters above sea level, at speeds of 64 kilometers per hour.

The mega cruise ships for 2020 just keep getting bigger. MSC Cruises’s MSC Virtuosa will be ready to welcome up to 6,300 passengers and 1,700 crew members when it debuts next year, with a gross tonnage of 181,541. The ship is MSC’s second Meraviglia Plus-class ship, following MSC Grandiosa.

Some of the ship’s highlights include two brand-new Cirque du Soleli at Sea shows, created exclusively for the cruise line; expanded digital features; some of the most plentiful poolside space at sea (the ship provides each guest with 10 square meters of public space, give or take); and expansive stateroom options.

The ship is slated to sail the Mediterranean after it debuts next year, making stops in ports such as Genoa, Rome, Barcelona and Marseille.

Costa sends its 2020 new-build ship Costa Firenze to China next year, to serve the Asian cruising market. The ship is expected to debut in late 2020, possibly October, but itineraries are already available for booking.

Costa Firenze stands at 135,500 gross tons and a guest capacity of 5,200 travelers, following in the footsteps of its sister ships that debuted earlier this year, Costa Venezia and Costa Smeralda.

Both Costa Firenze and Costa Venezia were specifically created for the Chinese market, and both are part of Costa Group’s expansion plans that include an additional five new ships to be delivered by 2023.

The ship’s inspiration comes from the Italian city of Florence and, as such, the entire theming, from entertainment to dining, reflects the Florence lifestyle. Expect suites outfitted with lush furnishings in rich color palettes, similar to what you might find in an Italian luxury hotel, and public spaces that mirror the extravagant decor of a European palace.

Odyssey of the Seas (Royal Caribbean)

Odyssey of the Seas is Royal Caribbean’s second Quantum Ultra-Class ship, set to be unveiled to North American travelers in November 2020. From there, the ship makes its way through the Caribbean, sailing from Fort Lauderdale, before heading across the Atlantic for summer Mediterranean sailings in 2021.

Some of the ship’s highlights include a two-level pool deck, top deck entertainment venue and SeaPlex playground.

SeaPlex is the largest indoor activity space at sea and this new iteration of the space will offer the most interactive arcade to ever grace a cruise ship, VR games, augmented reality walls and floors, a full-sized sports court, bumper cars, a laser tag arena, flying trapeze and sports bar. And if that’s not enough fun for you and your family, this ship will also offer a FlowRider surf simulator, a skydiving simulator, rock climbing wall, and bungee trampoline experience.

The two-level pool deck is also obviously getting a lot of attention. Odyssey of the Seas offers two open-air, resort-style pools, four whirlpools, two stories of drinks and pool views at Lime & Coconut, a poolside Mexican fast eatery, an aqua park and adults-only solarium with its own swimming pools and whirlpools.

Lastly, Virgin Voyages’ first-ever cruise ship, Scarlet Lady, has been getting tons of attention in the media and for lots of good reasons. This ship is an adults-only paradise, with plenty of luxury and spades of that Virgin flare that anyone who’s familiar with the brand knows.

Virgin began construction on the ship in 2017, with an expected 2020 completion. Scarlet Lady weighs in at 110,000 gross tonnage, 909 feet in length, 17 total decks and a passenger capacity of 2,770 travelers. While this ship is a little on the small side compared to some of these other mega cruise ships, it’s still drawing a lot of eyes, and we know a lot of cruisers are highly anticipating traveling aboard this one-of-a-kind vessel.

Scarlet Lady offers 78 RockStar luxury suites, 15 of which are Mega RockStar Suites. Once aboard, cruisers will enjoy spaces designed by world-class tastemakers, all the latest tech that any traveler could ever want and plenty of fun, too.

Virgin also puts an emphasis on sustainability, with sustainable sourcing of food and retail merchandise, sustainable technologies and bans on wasteful products like single-use plastics.

While many details regarding this ship have yet to be announced (including a final debut date), one thing’s for sure: This ship will be one of the most unique and out-of-the-ordinary on the oceans, taking cruising to an entirely different place, attracting potentially an entirely new crowd of cruisers.

What’s the most highly anticipated new cruise ship for 2020?

Many avid cruisers are definitely looking forward to the new Carnival Mardi Gras ship. The huge ship offers some very unique entertainment options that will appeal to families. The same can be said for Royal Caribbean’s Odyssey of the Seas, though Odyssey of the Seas is slightly smaller in terms of passenger capacity.

Both frequent cruisers and even non-cruisers are looking forward to Scarlet Lady’s debut. This Virgin ship promises to be completely unlike anything you’ve ever experienced in a cruise ship before, so travelers of all types, whether or not they prefer cruising, are keeping an eye on its sail out date.

If you’re planning a cruise for 2020, then, it’s worth looking into these three ships — Mardi Gras, Odyssey of the Seas and Scarlet Lady — if you want to experience the newest and best in cruising.

Several new mega cruise ships will set sail from the United States in 2020, including Celebrity Apex, Carnival’s Mardi Gras, Odyssey of the Seas and Scarlet Lady. 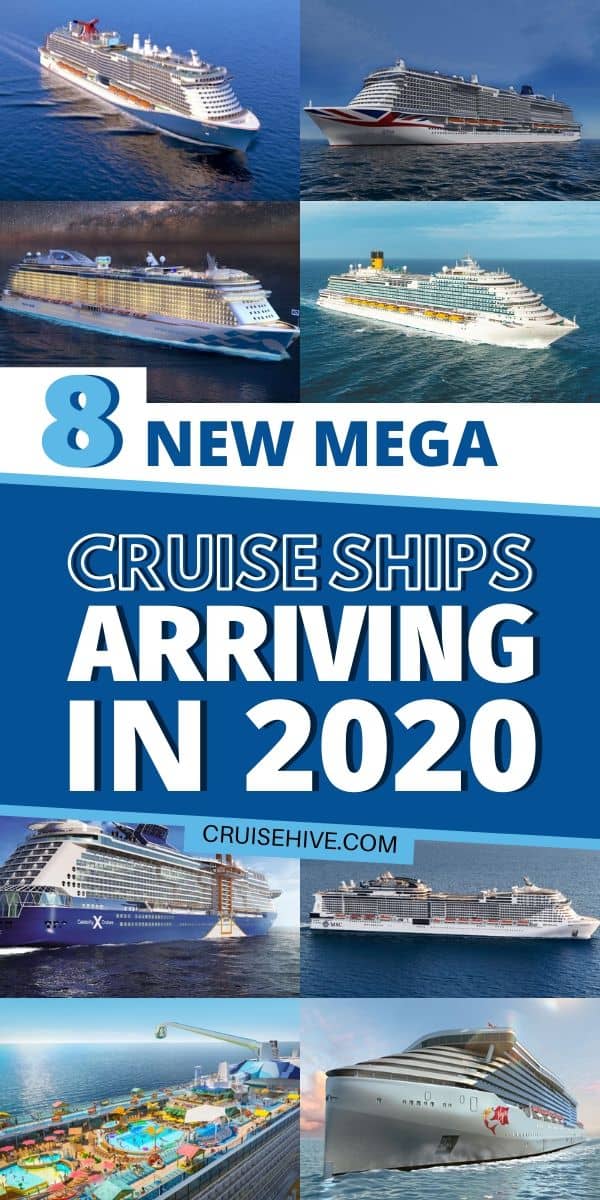