Miami is the cruise capital of the world with ships coming and going every day. Aboard these ships are thousands of crew members all working hard to give passengers the best service at sea.

After all that hard work during the cruise, the home port is one of the most important ports for many crew members. With PortMiami featuring seven cruise terminals, it can be busy with crew members getting essential stuff done before the next cruise begins later in the day.

Let’s take a look at 7 things crew members do when they get some time between cruises in Miami, Florida.

One of the most important things a crew member does when the ship is back in PortMiami is sending money back home. Many crew members will use the crew centers in the port to transfer their money to family at home. A wire transfer can be done onboard the ship but the crew centers do offer cheaper rates at times.

Sometimes the crew will hardly have any time on land, so they will send money quickly in the crew center next to the ship before going back on board to work.

It’s a high priority to call family at home. Crew members will buy a calling card in the cruise terminal or further away downtown. Calling from an American port is better as there are more options available.

With at least six months away from home each contract, calling home is one of the highlights and keeps crew members in the real world. Working on a cruise ship is like working in a bubble, everything stays the same on board with the world moving on. This includes friends and family, so it’s so important to keep in touch.

Oh yes, Walgreens time! One of the main reasons for getting off is stocking up with supplies from the popular U.S chain store. The Walgreens store which is located downtown is an essential part of a crew member’s day in Miami.

On a busy Saturday afternoon, you’ll see the store full with just crew members as they buy laundry powder, snacks, toiletries and more for their cabins on the ship.

The only problem with Walgreens is that carrying plastic bags of supplies back to the ship isn’t easy. First, the crew has to catch the shuttle back to the cruise terminal.

Once back at the terminal the crew also have to go through port security, so all the bags need to be searched. There’s more, the crew must go through the ship’s security on the gangway and then finally they are onboard! No easy task.

Not just in Miami but just about every port of call is important for Wi-Fi. The crew will often use their limited time in the city Skyping home and go on social media sites to keep in touch with those back home.

Popular places for the crew is the downtown Starbucks and a few of the other coffee shops nearby. Starbucks is usually the most trusted and also it’s an easy walk away from Walgreens and a few essential stores in the area.

The Bayside mall just down the road from the cruise terminals is the place to be for hanging out, shopping, eating and not thinking about passengers. The trendy marketplace is a hive of activity with small stalls and plenty of entertainment.

Crew members often go there for a bit of everything, with the nice Florida sunshine crew will relax before heading on back to the ship.

To get their minds away from non-stop work and amazing service, the crew will take some time browsing in the clothes stores. Some of the most popular stores are Marshalls, Express, Ross and some of the smaller gadget shops in the downtown and Bayside area.

When the ships are in town the lines are long, as crew members buy new outfits for the next crew party or for when their contract is up.

With so many ships docked and some from the same cruise lines like Carnival and Royal Caribbean, it’s common for crew members to meet up. They may have worked with each other before on one of the ships or just simply friends.

They’ll meet at one of the prime locations in Miami to gossip about their biggest tips and where they will go on their next contract.

There’s plenty to do in Miami but with limited time before the next cruise, it’s important to prioritize. If there is anything else which crew members should do while in Miami then please post in the comments further down below. 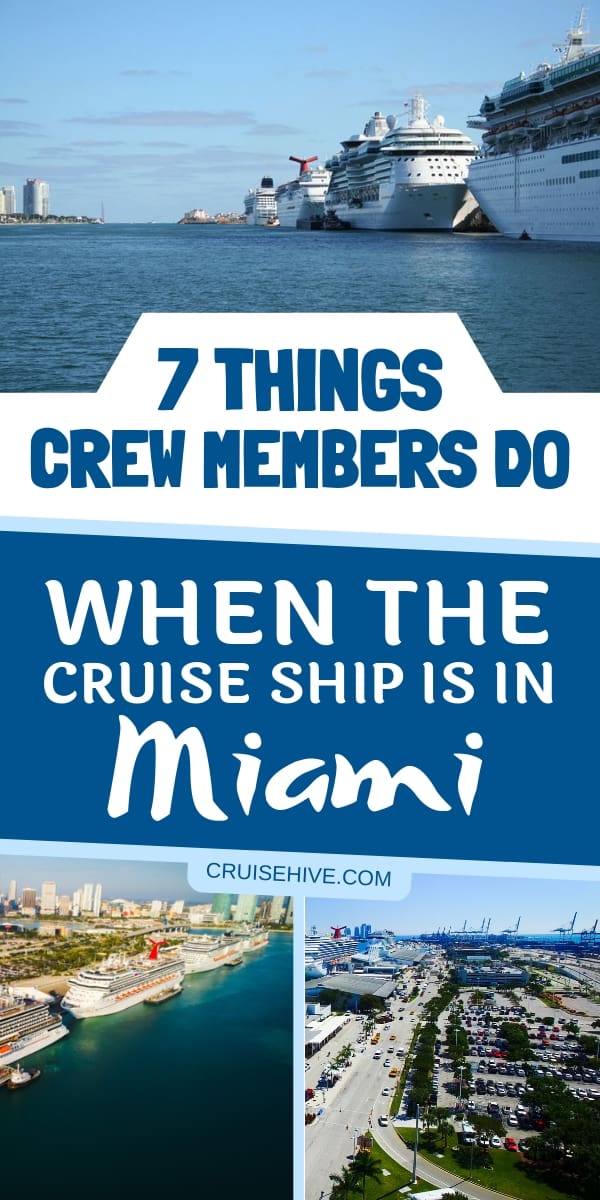