It's going to be another busy year for Royal Caribbean with the upgrade of five cruise ships. Here are the details of what we know so far for the dry docks.

In 2019 there will be five Royal Caribbean cruise ships upgraded. The cruise line is investing heavily in making sure the fleet has all the latest features to offer the best cruising experience for experienced and newbie guests.

It’s going to be another busy year for the Miami-based cruise line with the upgrade of five ships including one Oasis-class ship, two Voyager-class ships, the smallest vessel in the fleet Empress of the Seas and the China-based Quantum of the Seas.

Navigator of the Seas Dry Dock

The first vessel to receive a major renovation this year will be Navigator of the Seas. The ship will be amped up with all the latest features from Royal Caribbean’s Royal Amplified modernization program.

The dry dock already started on January 3 and the ship will begin sort and longer Caribbean cruises from Miami, Florida completely refreshed on February 24, 2019.

One of the biggest new features that will be added during this time is the longest water slide at sea called “The Blaster.” A two-person raft will offer the ultimate thrill with 800-feet of twists and drops which even extends out from the side of the ship. Check all the new updates at our dedicated post right here.

Empress of the Seas Dry Dock

The vessel will undergo an update from February 3 through March 3. Empress of the Seas is a much smaller cruise ship at 48,500 gross tons. Most of the work will likely be maintenance and technical aspects.

When it comes to these type dry docks there is some attention to the public spaces and cabins with a modern new look. The ship will probably get a nice new coat of paint too.

Voyager of the Seas Dry Dock

The Voyager-class ship will not miss out on all the exciting new offerings the cruise line investing in. No specifics have yet been announced but expect the ship to be amped up just like sister ship Mariner of the Seas was in 2018.

The huge multi-million dollar upgrade will take place from September 10 to October 14, 2019. We know that the ship will likely get a modern new look with updated public spaces, new venues, and enhancements just about everywhere.

Oasis of the Seas Dry Dock

This could be the biggest dry dock of the year not just in the Royal Caribbean fleet but across all cruise lines. Oasis of the Seas is among the largest in the world so upgrading her is going to be a big thing.

The renovation will take place from September 22 and finish on November 23, 2019. The details of the upgrade have not yet been announced but the ship will receive some new concepts and enhancements which are already seen on sister ship Symphony of the Seas. The dry dock will be part of the Roayl Amplified program and cost multiple millions of dollars.

Quantum of the Seas Dry Dock

The Quantum-class cruise ship which is currently based in Shanghai, China will be the second largest Royal Caribbean ship of the year to undergo a major renovation. The dry dock will begin around October 19, 2019, at the Singapore shipyard and be completed by November 16, 2019.

The cruise line has not yet revealed what will be added during the multi-million revitalization. We do expect some of the features for the Chinese market to be replaced ready for her new service sailing from Singapore. You can read full details about the new deployment right here.

A Busy 2019 for Royal Caribbean

It sure will be a busy year for Royal Caribbean as the cruise line continues to invest in upgrading 10 ships in 4 years. Independence of the Seas was the first ship to receive the new Royal Amplified upgrades which is part of a huge $900 million program to make sure guests are still wowed!

Keep checking Cruise Hive for all the latest refurbishment details as they are revealed and let’s start getting excited about the newly transformed Royal Caribbean cruise ships which are on the way. 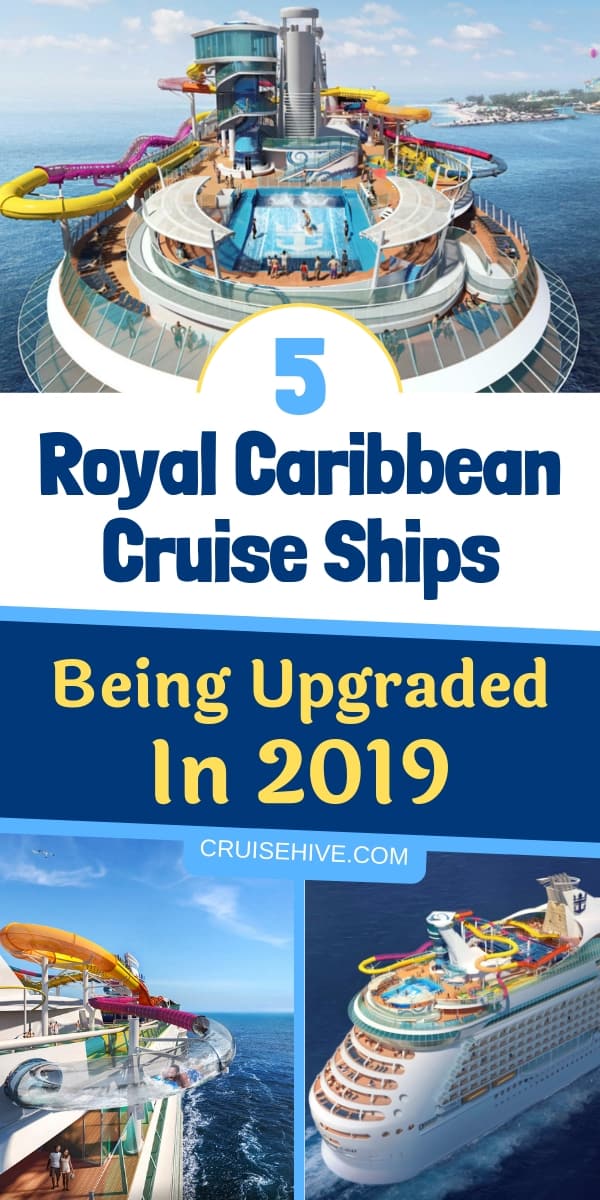