Someone has just gone “oh no” as a post on the official FlowRider site might have just revealed the name of the next Royal Caribbean Oasis-class ship.

In a post that has since been removed from the FlowRider site the name of the next Oasis-class cruise ship could be Symphony of the Seas. In that post, it is also named Ms. Symphony and it does look likely that it is the name of the 4th oasis class ship.

It could just be another way to tease everyone with the ships name and provide some more publicity, we’ll let you decide:

But what does all of this have to do with music? Well, Symphony of the Seas®, that’s what. This is what RCCL will call their fourth OASIS Class cruise ship and it’s due to be commissioned later this year! Translation: we are super busy building #17 and 18 on the beautiful Ms. Symphony. With even more in the pipeline, can we ask for a better advertisement for repeat business? For customer AND consumer satisfaction? And if it is “good to great” enough for RCCL, shouldn’t it be for you?

Even if the name is Symphony of the Seas it isn’t too bad at all and has a ring to it. At the moment the huge ship is under construction STX shipyard in St. Nazaire, France and once complete will be at least 227, 700 gross tons making it among the largest cruise ships in the world.

The upcoming vessel will be delivered to the cruise line in Spring 2018 and until then several major construction milestones will take place. The ship will float out on water for the first time and still must undergo sea trials which are a while yet. The keel laying ceremony took place in October 2015.

if there is any other news on the fourth Oasis-class cruise ship we’ll keep you all updated. 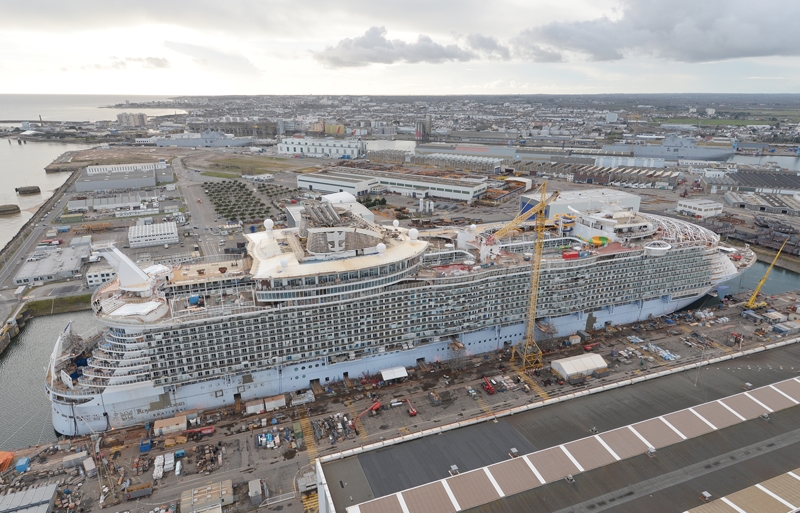