Four cruise lines which are owned by Carnival Corporation will launch new cruise ships this year.

2018 is going to be another busy year of new cruise ships entering service. Carnival Corp which owns some of the biggest cruise brands in the world will also have new cruise ships. Four cruise lines which are owned by Carnival will have new ships including German-based Aida Cruises, Carnival Cruise Line, Holland America Line and Seabourn.

Not just that but the cruise company will have a total of 18 new cruise ships delivered between 2018 and 2022. That’s huge growth and the new vessels will bring new features and innovations to keep up with growing demand.

“On top of the three new ships we launched in 2017, we look forward to the delivery of four more spectacular ships that will help us continue providing extraordinary cruise vacations at an exceptional value for our guests.”

“The new ships also demonstrate our long-term strategy to build highly efficient, innovative and state-of-the-art ships that offer our guests the latest in onboard features and amenities, while creating excitement in the marketplace that will continue to inspire more travelers to consider cruising as a vacation option.”

We’ve already focused on the new cruise ships to sail from Florida in 2018 but now we’ll focus on the new ships to sail for Carnival in the four different cruise brands. We’re especially happy that not all the ships are huge, there are smaller vessels covering different sized markets.

Seabourn: Seabourn Ovation – Arriving in May 2018

Guests will first be able to enjoy the luxury vessels modern and contemporary design by Adam D. Tihany when it departs on an 11-day inaugural voyage from Venice, Italy on May 5, 2018. The new ship will spend much of the inaugural season sailing Northern Europe. The ship will also be offering longer 14-day cruises to the Norwegian fjords and the British Isles.

We must have posted about Carnival Horizon a dozen or so times, just recently the ship was voted by Cruise Hive readers as “The Most Anticipated New Cruise Ship for 2018.” The ship will join Carnival Cruise Line in April 2018 with the maiden 13-day voyage departing Barcelona Spain. The ship is sister to Carnival Vista which joined the fleet in 2016 and it was the first to introduce the award-winning SkyRide feature along with the first ever IMAX Theater at sea.

After sailing four cruises out of Barcelona Carnival Horizon will sail a 14-day transatlantic cruise to ending in New York on May 23, 2018. The Carnival cruise ship will offer cruises to Bermuda and the Caribbean before finally heading down to its new year-round homeport of PortMiami, Florida. The ship will sail 6-day and 8-day itineraries along with a special one time 2-day cruise starting from September 20, 2018.

Carnival Horizon is currently under construction by Fincantieri in Italy and once complete will be 133,500 gross tons. The vessel will be the 26th Carnival cruise ship.

Aidanova is the largest ever cruise ship ordered by parent company Carnival. The vessel will also become the largest passenger capacity cruise ship in the world. The new ship is currently being built and will arrive at the end of 2018. It will be the first ever cruise ship fully powered by Liquefied Natural Gas (LNG), this is good news for the environment.

Aidanova will be a ship like no other with new innovations and features, 20 different stateroom types, outdoor private sun islands, the first-ever beer garden at sea with its own brewery, 360-degree Theatrium and Studio X, 5 specialty dining venues and a whole lot more.

Once in service in December 2018, Adianova will offer 7-day cruises around the Canary Islands. The ship will be 180,000 gross tons and be able to carry 6,600 guests.

And finally, we come to the second Pinnacle-class ship for Holland America Line. ms Nieuw Statendam will be the sister ship to ms Koningsdam which arrived in April 2016. The new ship will be 99,500 gross tons so doesn’t follow the trend of large cruise ships.

This mid-sized vessel will bring the very latest Holland America features including the popular Music Walk area featuring all genres of music showcased in venues including Lincoln Center Stage, Billboard Onboard and the dynamic B.B. King’s Blues Club. With the 270-degree LED projection at World Stage, show-time performances will immerse the audience in panoramic visual and sound effects.  The ship will also launch with the newly created Exploration Central’s hub located in the Crow’s Nest.

Nieuw Statendam will depart on its maiden 14-day transatlantic voyage on December 5, 2018, to Fort Lauderdale, Florida. Port Everglades will be the ship’s homeport for the winter season offering 7-day Caribbean cruises.

The upcoming Holland America ship will be able to carry 2,666 guests. 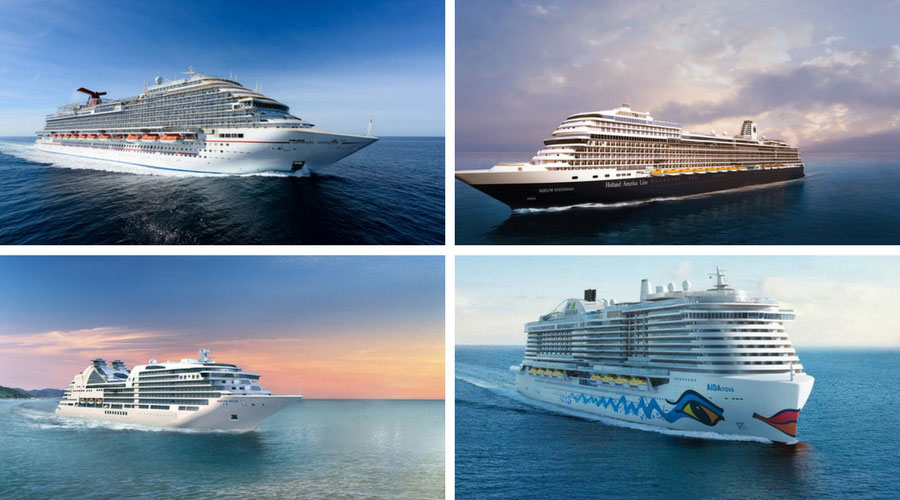