3 Carnival Cruise Ships: Then And Now

As the cruise industry is looking into the future and planning even larger cruise ships we thought we would look at some cruise ship that made it all possible. We’ll look at some of those mega liners of their time and the ships that helped grow what has now become the worlds largest cruise company. It’s nice to look back at the lines most changed vessels as they remind us why we got into cruising and why new ships like the Carnival Vista wouldn’t be here if it wasn’t for these.

Let’s start with the vessel that helped start the rise of the world’s largest cruise line company. The TSS Mardi Gras wasn’t built for Carnival Cruise Lines as it was first known as RMS Empress of Canada and sailed for Canadian Pacific before being sold to Carnival in January 1972.

The ship first set sail from Miami, Florida for Carnival on March 11th 1972 and during its maiden voyage it actually ran aground! To keep up the Mardi Gras was first a struggle for owner Ted Arison but who would have thought that Carnival is now the world’s largest cruise line. Most cruisers will know the Mardi Gras after she sailed for Carnival but it did in fact end its career sailing for Greek cruise line, Epirotiki. 2003 was the year the historic vessel was finally retired and then later scrapped.

The Mardi Gras brought the Las Vegas atmosphere and decor to the sea and the funnel colors have become the most well-known within the cruise industry. Even though today’s Carnival ships are larger and are fitted with different shaped funnels they are all still based on the Mardi Gras concept which is also where “The Fun Ships” all began! The Mardi Gras was 27,250 gross tons and could carry up to 1,000 passengers.

The Carnival Destiny was once the world’s largest cruise ship and made history by being the first passenger vessel over 100,000 gross tons. The name “Carnival Destiny” is now no more as it was refurbished in a multi million dollar dry dock and then renamed the Carnival Sunshine. It now might as-well be another ship!

In February 2013 the Carnival Destiny made her very last voyage across the Atlantic on a 18-day cruise that departed Miami, Florida. It was an end of an era for the ship that helped put Carnival Cruise Lines on the map. Ever since the Carnival Destiny most of the ships built after her have been a similar design and defined how the fleet would look to this day.

The Carnival Sunshine continues Destiny’s legacy with all the very best the cruise line has to offer. the ship features all the latest FUN 2.0 upgrades including a multi deck adults only area that is unique within the fleet. Carnival Sunshine will still be a popular choice for cruisers and is like the unofficial flagship.

The Celebration is mostly known for sailing in the Carnival fleet along with the same class vessel of the Holiday and Jubilee. The ship was built-in Malmo, Sweden by Kockums Varv in 1986 and was the last vessel built-in its class. Even though it was the last future classes still had a similar design until the new era of cruise ships began with more balconies. Even though the Celebration stopped sailing for Carnival Cruise Line in 2008 it still continued under Spanish cruise line ibero Cruises. The ships hull was re-painted and the famous red and blue funnel was also painted.

The 47,260 gross ton cruise ship was transferred to Carnival Cruise Lines sister company Costa Cruises but even before the funnel could be painted into the iconic Costa color of yellow the ship was purchased. Newly formed cruise line Bahamas Paradise Cruise Line bought the ship to become the company’s very first vessel. A new lease of life was put into the now named Grand Celebration in 2015 but not without any issues. The ship’s maiden voyage for the new cruise line was cancelled from West Palm Beach due to an issue with the vessels PA system.

No matter when we look at the cruise ship the funnels shape will always remind us of her roots. nothing beats that famously shaped funnel! At least for now the vessel is being cared for and not scrapped which is important in today’s world. 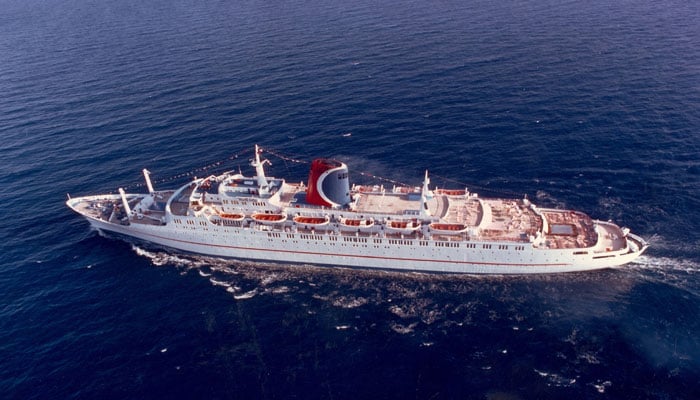