In a tragic accident, today on the world’s largest cruise ship Cruise hive is sad to report that one crew member has died and four more are injured.

According to many reports which are now online one of the lifeboats on Harmony of the Seas unexpectedly detached causing the lifeboat to fall into the water. There were five crew members inside the lifeboat which fell and sadly one Filipino died. Four more crew members are injured with two in a critical condition.

Sad news to share that a #HarmonyoftheSeas crew member has died of injuries suffered during a lifeboat drill conducted in Marseille, France.

We are sorry to share the sad news that a crew member aboard Harmony of the Seas has died of injuries suffered during a lifeboat drill conducted while docked at the port of Marseille, France. Four other crew members received medical treatment in the same incident. We are keeping our colleagues and their families in our thoughts and prayers.

The incident occurred while the biggest cruise ship in the world was docked in Marseille, France today. The ship’s crew were doing a scheduled lifeboat drill at the time. In these cases, the crew will usually lower some of the lifeboats into the water to test them and help train the crew.

The 227,000 gross ton Harmony of the Seas is operated by Royal Caribbean and is the world’s largest cruise ship. The Oasis class vessel which entered service this year is on an 8-day Mediterranean cruise which is scheduled to arrive back at its homeport in Barcelona, Spain on September 18.

This is a developing story, we will be updating accordingly with any new updates. Our thoughts are with the Filipino crew members loved ones during this terrible time. We also hope the other four make it through and recover fully. 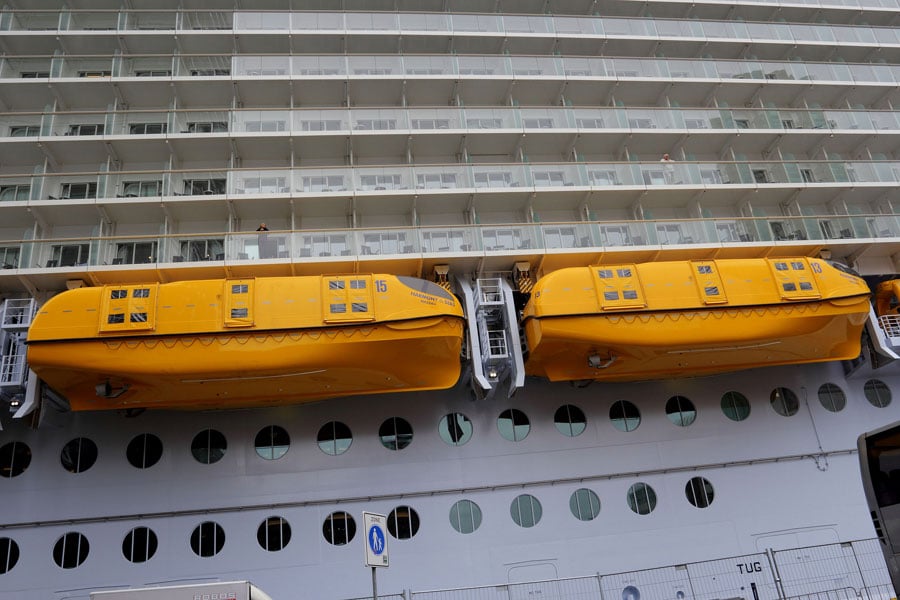